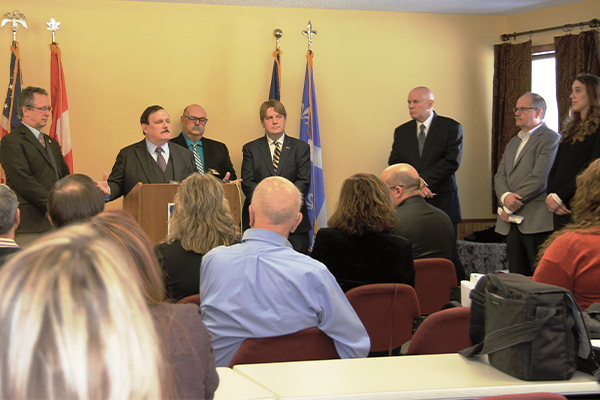 The North Country Chamber of Commerce recently conducted its Annual Issue Survey, providing a snapshot of the business community’s opinions on a number of federal and state issues as well as our annual Business Confidence Index.
The index is a combination of those in the business community who expect their business activity to be up this year and those who expect it to be steady. For 2019, 79% expect their business activity to grow and another 17% expect no change, adding up to a Business Confidence Index finding of 96%. Interestingly, this is exactly the same finding as in 2018 when it was also 96%, but with a slight internal shift to the good. Those anticipating growth in 2019 increased 4% from 2018, shifting from the no change figure.

We can see several factors supporting this continued confidence and optimism, including continued strong growth in the U.S. economy and a significant area decline in unemployment, as well as continued strength in cross border visitation and spending by our Canadian neighbors which help to feed higher sales tax receipts. We also saw a number of reinforcing developments such as the current construction of the SUNY Poly facility at the old airport site for Norsk Titanium, a resumption of Canadian interest in potential growth in the U.S. following the new NAFTA agreement in October (USMC), the new United Express service and its success, the completion of eleven projects at Plattsburgh International Airport with $38 million awarded by the state, and even the attraction of a proposed $20 million private development in downtown Plattsburgh.

Make no mistake. A primary ingredient flowing directly or indirectly through all of this is our continued success in managing, growing and maximizing our special economic partnership with Canada, and especially Quebec. That’s why, for the first time in years of surveys, we had a virtual 100% response agreeing that the U.S.-Canada relationship is working for the North Country and must be supported and preserved. There was literally only one response in disagreement!
There was also 97% support for Congressional approval of the updated NAFTA agreement (USMC), with 96% calling for a settlement soon that will end U.S. and Canadian tariffs put in place last year. 81% believe the continuation and expansion of a tariff-based trade war with China would be harmful to the U.S. economy.

The cautionary note in all of this is the enormous importance to our area of stability and predictability in the U.S.-Canadian relationship, including reversal of the remaining tariffs which are impacting many of our companies and their cross-border supply chains and avoidance of any new disruption around potential Congressional inaction or mischief related to USMC. We cannot control either, but we can and will remain involved in every way we can, looking to punch above our weight as we managed to do last year.

Our growing challenges with workforce recruitment and skills development also remain an issue requiring attention and progress in the year ahead. This was once again accented by the business community which identified greater and more flexible state support for workforce development and training as far and away this year’s top priority in Albany.

The survey’s findings provide an overall roadmap for our active efforts in Albany, Washington and Canada as we endeavor to remain the key advocate for the North Country economy.