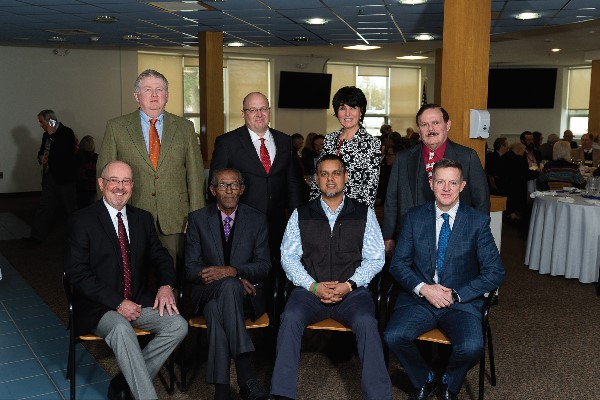 The 30th Annual Strictly Business Forum began with publisher Herb Carpenter introducing the attendees, several of whom had participated in the first SB Forum. It was a diverse gathering—more women and people of color than ever before. The demographic that encompassed the most diversity was age. A guestimate of the range: 25-80—pretty good.

For the round table discussion, participants were assigned to one of seven groups. At my table were:

The discussion got under way with participants reflecting on the area’s business community over the last 30 years and how it has fared. In 1989, Plattsburgh was holding its own economically, but in a few short years, the region would face major upheaval with the closing of Plattsburgh Air Force Base. According to Garry Douglass, “The Base wasn’t on the hit list. In fact, there were plans to expand its mission, making it larger and more strategic to the U. S. defense system.”

Dave Merkel added, “The Base closing impacted everyone in the North Country.”

What ensued could be called a movement of people intent upon growing the vitality and economic viability of Plattsburgh. Garry Douglass again, “Standing on that flight line in 1996, you could not have imagined what would be here today.”

The discussion moved to local workforce and issues of recruiting and competing for talent with the necessary skills for the variety of employers in the region. Michele Friedman observed that CV-TEC invested in “Train and Sustain” partnerships with employers that examine their skillset
demands and develop ways to meet those needs through experiential learning, internships and training programs.

Chris Maharaj seconded the importance of efforts to produce a sustainable applicant pool. “At GP Consumer Products, we have 100 employees currently, down from a peak of 600 in the early 2000’s. On the other hand, we have four to six positions open now that we can’t fill because there are no applicants with the needed expertise and skills.”

Chris Trombley addressed recruitment and retention, “We have to become more aware of employee needs. It has become necessary to think beyond the workplace in terms of what communities can offer. Being more aware means employers can be more responsive and that promotes
engagement at work as well as longevity.”

Technology emerged as both a blessing and a burden for this group. Friedman aptly described it this way, “The exponential explosion in technology can produce challenges.” It seems that on the front end, the installation and training that goes along with new technology can be a massive headache as employees are pulled away from ongoing responsibilities to learn the new ways of work. But eventually, the new technology becomes an asset.”

“We have four to six positions open now that we can’t fill because there are no applicants with the needed expertise and skills.” —Steve Maharaj

“I was a senior Education major at SUNY Plattsburgh. My how time flies.” Michele Friedman CV-TEC

“I was Congressman Jerry Solomon’s executive assistant, working hard and learning from him how to maximize federal dollars for projects and programs for his district.” Garry Douglas North Country Chamber of Commerce

“I was a young machinist at Vermont Precision Tools.” Chris Trombley Country Malt

Andrew Wylie offered a perspective reflecting his view of changing technology. “Currently approximately five per cent of criminal cases, from misdemeanors to felonies, go to trial. Providing discovery to defense attorneys for that number of cases is not a difficult task but a new law, effective 1/1/2020, will require discovery to be provided in 100% of all criminal cases.” With new technology and voluminous amounts of material to be uploaded, Wylie’s office will be swamped. Eventually this mandate will be beneficial but “It’s going to be a near impossible task at first,” he said.

Chris Trombley added, “The steady and increasing use of digital core and robotics across the business spectrum pushes us to consider incorporating them to remain competitive but you have to have the skilled labor in place or it will just sit.”

Data, trends and analytics are not new to businesses. Inventory; R&D; cost/benefit analysis; local, regional, national, and international assessments are used by businesses to measure competitive viability and how it might be improved. But today there are a plethora of
options and the output comes infinitely faster.

Our group moved on to the question about the greatest asset their business could offer to the North Country. Here are the words used by all seven participants: “people, skilled people, responsible people, respectful people, knowledgeable people.”

“Standing on that flight line in 1996, you could not have imagined what would be here today.” —Garry Douglas

Our next question for discussion was what advancement would you like to see for the region? Michael O’Connor suggested a merger of the city and the town. “It would reduce duplication, share resources, services and revenues that would improve life in the area.”

Chris Trombley would like to see “more promotion and advancement of the region and its assets such as the promotion of the “Adirondack Coast” that highlights our natural resources, people, recreational opportunities, transportation, and all the benefits that attract talent to our
region.”

Our time limit was approaching but because our discussions had been rich and stimulating, they were difficult to wind down. To wrap up, I asked each to summarize the experience. Garry Douglass’ comments resonated with his fellow group members and therefore his words will serve as
our summary.

“There is a resilience to the North Country business community that, when challenged, it rises up and meets it. Resilience means in the aftermath of adversity bouncing back to where one was before. This does not aptly describe what has taken place in our area over the last 30 years.
The community did bounce back but not to the place it was previously. The North Country business community went beyond where it had previously been and became a better version of itself.” The resilience was collective. It spread, nourishing and strengthening individuals and
creating a shared resilience. A high tide raises all boats.

David Stone is an Associate Professor of Counseling & Human Services at SUNY Plattsburgh.