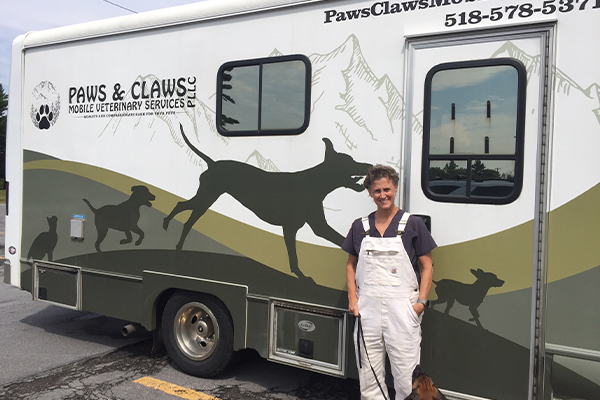 Growing up in Rome, New York in the 1980s Jacquelyn Bentley dreamed of being a surgeon. Her goal was to attend SUNY Cortland, major in the sciences and then go on to medical school. What she didn’t realize was that attitudes about women in the professions hadn’t fully evolved. When she was an undergraduate, a male professor urged her to consider veterinary medicine instead, suggesting it might be “a more suitable career choice.”

Bentley finished her time at Cortland, earning dual degrees in Biology and Chemistry. Next, she was on to Cornell University where she earned her Doctor of Veterinary Medicine in 1995. Her first job was working with both large and small animals in southern Vermont. The work was hard and the pay was low and so, when she saw an ad for a position with Dr. Sheldon Hagar, owner of Champlain Valley Veterinary Services in Plattsburgh, she jumped at the opportunity.

Hagar invited Bentley to lunch at his home and took her for a ride through his apple orchard on a dirt bike. “He was wonderful,” she offered, “warm, funny, kind to everyone, and a great teacher.”

Bentley worked side by side with Hagar for three years and eventually purchased the practice when he was ready to retire. As the sole owner she immersed herself in the business side of the business, managed staff vets and cared for a growing number of four-legged patients.

One of her greatest challenges was recruiting. “Veterinary medicine was changing and the number of graduates going into general practice was not keeping up with the demand,” she observed. “Most wanted to become specialists – that was where the money was.”

A decade later, when an opportunity to sell the practice presented itself, she accepted the offer, but stayed on as a staff vet. In 2015, with her children in school in Lake Placid, Bentley decided it was time to end her daily commutes to Plattsburgh and find work closer to home. A job in the Tri-Lakes area worked well for her until a multi-billion-dollar veterinary company came along and bought the practice she was working for. “I knew I didn’t want to work for a large corporation, so I needed to find another way to pay my bills,” she said.

That proved to be more difficult than Bentley anticipated, but she eventually found relief work in the Albany area. “That meant I worked for a few days or a few weeks at a time when vets were on vacation or they were ill. It didn’t take me long to figure out I needed a better plan.”

Looking for a way to retain all the elements of veterinary medicine she loved, but none of the ones she didn’t, Bentley headed in a new direction, reaching out to LaBoit Specialty Vehicles in Columbus, Ohio, the world-wide leader in mobile veterinary clinic manufacturing. The family-owned company offered 40 years of expertise, proven vehicle designs and the guidance she needed. After careful consideration, she chose a 26’ long x 7’ high x 8’ wide vehicle with a surgical suite and custom-made cabinetry. It was constructed of medical grade materials and engineered for safe balance on the road. Plug-in power, a generator and an inverter would operate the oxygen, x-rays and a compressor for dental procedures.

LaBoit’s promise to have the unit ready for August 2020 gave Bentley time to develop a business and marketing plan, establish a Facebook presence and prepare for her new career as a mobile veterinary services provider. Then came the phone call that changed everything.

In February Bentley was notified her unit was ready for pick up — six months early. “That’s when the fun began,” she explained. She traveled to Ohio and took possession of her new mobile clinic on March 9th – one week before COVID hit New York and shut down most businesses.

Problems that might have overwhelmed others provided Bentley with the incentive to speed up her planning and kick start her business intro. At first, she visited Lake Placid, Saranac Lake, Tupper Lake, Malone, and Wilmington with her Paws & Claws Mobile Unit, setting up in parking lots.

In the early days, she spent much of her time meeting people to establish and reestablish contacts. “I love being my own boss,” she emphasized. “I have always believed veterinary medicine is much more than a way to make a living. It is based on relationships. I want to know my clients and their pets and that takes time. I don’t believe in short appointments.”

Bentley limits her current practice to cats and dogs – young and old, small and large. She provides wellness exams, new puppy and kitten evaluations, spaying and neutering, preventative care, vaccinations, dental care, diagnostic services, surgery, and hospice care. “I can do everything other vets can do except for hospitalizations and emergencies,” she emphasized.

As Paws & Claws practice has grown, Bentley has limited her service area to Lake Placid, Saranac Lake and Tupper Lake weekly, Plattsburgh monthly and an occasional requested stop in Jay, Keene and Wilmington. She maintains a small office in Lake Placid where she keeps her inventory, sterilizes her instruments and receives her mail.

Asked if she regrets not pursuing a career in surgery, Bentley did not hesitate. “Veterinary medicine has provided the elements I found most attractive about surgery. It has offered me a career that allows me to impact my patients’ lives and at the same time enjoy my family and participate in activities I find rewarding.”

Her comment about activities introduced our SB interview to an entirely different aspect of Jackie Bentley’s life — her participation in triathlons – four to be exact — three in Lake Placid and one in Arizona. She will take on her fifth in Sacramento, California in October.

For those of you who may not know the details, let me explain. A triathlon is made up of three elements: a two-and-a-half-mile swim, a 12-mile bike ride and a 26.2-mile run. It is timed and it is intense.

Bentley was always interested in sports. She played field hockey, volleyball and softball in high school and was the goalie for the Central New York women’s field hockey team in the 1986 New York Empire State Games. A decade ago, she took up mountain climbing. While she is not an Adirondack 46er yet (11 mountains to go), she is determined to achieve that coveted title.

Jackie Bentley may be small in stature, but she is huge in ambition, determination and compassion. For more than two decades her love of animals has been a driving force in her life. She is truly small but mighty.