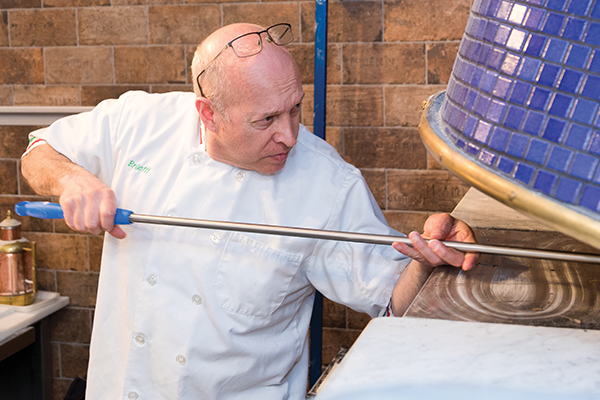 Dining at the Casa Capitano, an aviation-themed Italian restaurant in Rouses Point, is the flight of a lifetime to authentic and homemade Italian cuisine. Proprietors Tom and Elizabeth Brilotti pride themselves on creating an unforgettable experience from the moment you check in to the moment your taste buds have landed. Homemade pasta, original Neapolitan pizza and Casa Capitano’s signature sauce made with imported Italian tomatoes make their patrons’ culinary journey like no other.

“Throughout our marriage, we talked about opening an Italian restaurant,” disclosed Tom as we sat at the custom-made, wing-shaped counter of the innovative restaurant he established with Elizabeth in 2017. Both raised in Italian families in Montreal, they met at a ball- room dance class and were married in 1993.

Casa Capitano (Captain’s House) is a product of the Brilottis’ retirement. The backstory is that after being immersed in Flying magazine throughout his teenage years, Tom earned his pilot’s credentials from the Sierra Academy of Aeronautics in Oakland California, and then spent 40 years as an airplane pilot, instructor, and examiner. Elizabeth graduated from McGill University with a BS in Microbiology and Immunology and spent 26 years in the pharmaceutical industry in Quality Assurance for the Pfizer Corporation. The couple fell in love with Rouses Point and settled there with their two children, Jordan and Lauren, 17 years ago.

“Elizabeth grew up cooking with her mom, Maria Pasceri, a pure Sicilian who immigrated to Montreal,” Tom explained. “My mother-in-law spoke only Italian and made everything by hand. Just the stuffing for her cannelloni took four hours.” Like many traditional Italians, Elizabeth and Tom spent every Sunday at Nonna’s house enjoying her incredible food along with the extended family. “This restaurant features her recipes,” Tom said.

“The majority of my childhood was spent cooking with my mom, her three sisters and my grandparents,” added Elizabeth. “Although she passed away in 2016, Mom is there in spirit every time I cook. She knew about our plans for the restaurant and, at first, thought we were a little crazy, but later she said if she was 50 years old, she’d do it. Tom and I are continuing her culinary traditions.”

Originally envisioning a “mom and pop” operation, the Brilottis purchased a house on the Rouses Point waterfront and began a complete renovation. Over time, according to Elizabeth, “The project took on a life of its own.”

“I did the original blueprints,” offered Tom, “and worked in coordination with a lot of local professionals. The Village of Rouses Point was extremely helpful, especially the engineer and the code officer, as were many individuals who did custom woodwork, fixtures and landscaping. We added an upper deck with fire-pit tables (the view of the lake is amazing and the heated tables allow patrons to enjoy their wine outdoors well into October), a parking lot with handicapped access, a foundation with a ventilator and chimney for the Acunto Mario—a 6,000 pound artisan pizza oven from Naples—and a specially designed cupola to enhance the roof of the building The ceiling fan on the second floor was made by a Rouses Point resident using a radial engine from the 1930s. The walls are covered with photos and mementos from Tom’s aviation career.

During the renovation of the building which dates from 1850, Brilotti and his crew discovered many artifacts from its previous residents, including photographs, spectacles, other personal items. These are in a display case in the lobby.

Casa Capitano serves homemade and authentic Italian dishes for lunch and dinner six days a week (they are closed on Mondays). All pasta (spaghetti, fettucine, linguini, and ravioli) is freshly made on premises. All sauces and soups are also handmade; the tomato sauce is made from imported Italian tomatoes crushed with a hand sieve to ensure proper texture. The fillings of the cannelloni, lasagna, manicotti, and gnocchi are Nonna’s recipes, and stuffed by Tom and Elizabeth each day. It is, as they said, a labor of love.

“Our signature dish is the Seafood Alfredo,” said Tom. “The lobster tails come from the cold waters of Canada and all our other sea- food is completely fresh. The rib steaks are USDA Prime, and we offer a complete range of Italian and French wines. In addition to Italian beer (Peroni) we also stock many craft beers and, of course, we have a full bar selection of liquors and cordials.”

The Brilottis employ 14 year-round; the number increases to 30 in the summer. In keeping with the aviation theme, the wait staff proudly wears pilot uniforms. Although Tom and Elizabeth do much of the cooking, they also have five cooks on staff.

Casa Capitano offers takeout, especially for their Neapolitan pizzas (the artisan oven heats to 900 degrees and can cook a pizza in two minutes), and can arrange private parties as well.

THE CHALLENGES AND REWARDS

As any restaurant owner knows, surviving the first three years in business, especially over the winter in the North Country, is the ultimate challenge. In addition, translating home cooking for a family to serving dozens of restaurant patrons in a timely manner has been a management challenge. With more than a year proudly under their belt, Tom and Elizabeth are getting adjusted to the hard, but ultimately rewarding work. It’s been worth it. “We get to meet an incredible number of people we manage to attract. We even had a couple travel by train from Brooklyn. When I go table to table, our patrons say they’ve never tasted anything like this in their lives.”

Moving forward, Tom hopes to add a 128- foot dock to offer berths for yachts and seaplanes and build another deck to accommodate additional diners.

Asked what inspires them to face the challenges of running the restaurant, Tom explained, “We fell in love with the Village of Rouses Point, and want other people to discover it. We want the restaurant to be a destination point. Our wonderful lakefront location in this beautiful village makes it possible to arrive by car, boat, airplane, bicycle, or on foot. We hope to help the economy of the village we love. This is just the beginning of something we hope becomes much bigger. Come and dine with us.”