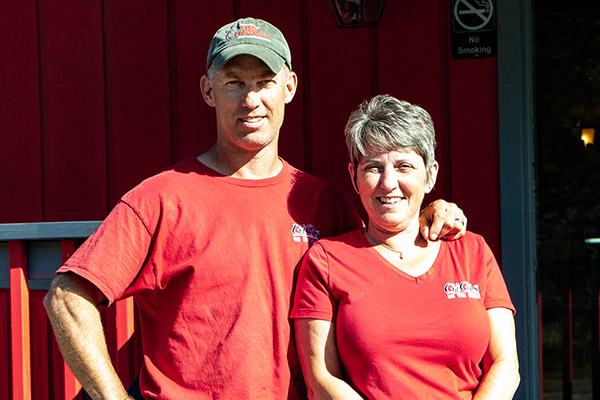 The former Barnstead restaurant in Keeseville was closed and offered for sale. Was it an opportunity just waiting for the right buyer? Tammy and Greg Atkins thought it might be. When the couple walked through the space for the first time, they were inspired by what good shape it was in. It hadn’t been used for some time but it had good bones. It just needed some love.

It didn’t take the Atkins long to make the decision to move forward. It was a quick closing, for which they are grateful to the previous owners Carolyn and Cindy Moore. “They were great. They were really pulling for us,” Tammy explained. The couple got right to work, and it was all hands-on deck. Greg, with the help of his stepson and family, renovating the outdoor seating area to create a multi-tiered eating space which flows right down to the AuSable River. “We really wanted to capitalize on the beauty of the region we live in,” Tammy enthused. Greg even cleared out a driving path so that customers who might be uncomfortable going indoors, or challenged by long walks, could drive around to the back of the restaurant and enjoy their meal alongside the river. Conversely, if indoor seating is your comfort zone, there is a large dining room, and if you’re embracing the hybrid life, there is a screened-in porch between the bar and the deck.

Tammy had worked with Karen Barber at The North Country Club (also in Keeseville but now closed) almost 30 years ago. And so, when she and Greg were getting ready to open Gigi’s on the River, she knew who to call. Also joining the team as head waitress was former co-worker Sandy Joy.

Gigi’s opened in the end of August last year. While the initial plan was to establish a catering hall for the Keeseville area, that idea needed to be put on hold when the pandemic hit. Not to be deterred, Tammy and her team pivoted, choosing to see the problem as an opportunity, developing a profitable schedule and tweaking their offering to the appetite of the community. They have recently reopened and are ready to go.

As owner/operator Tammy handles all aspects of the business. Her decades working in hospitality management in other restaurants, coupled with her work ethic and high energy are fueling Gigi’s growth. Kitchen Manager Karen is most comfortable on the line were she happily prepares North Country comfort food favorites. “We don’t do dainty food here,” she said with a smile. Greg observed, “At Gigi’s we pride ourselves on finding the sweet spot between quality and quantity.”

The ability to be able to “call plates” which means making sure the food comes out at the right time so all diners at a table can enjoy their meal at the same time is critical for a successful kitchen operation. To be able to do it without yelling is something that is even more impressive, and that is Karen’s superpower. Of her work Tammy said, “There is no one who can run the grill like Karen does while

expediting all the meals. She’s awesome and we are lucky to have her.” Karen, a woman of few words, differed the compliment and said, “I’m the lucky one. I wouldn’t want to do this with anyone else.”

The crew operates well together and they value the feedback from patrons. Greg, who owns and operates his own business — Adirondack Firewood and Logging — tries to drop in during dinner service. He runs plates, washes dishes — whatever is required. He is developing a reputation for bringing the dessert tray around and going down on one knee while offering customers a sweet treat to finish their meal. The feedback he collects is important to all of them. They take it to heart and want to make sure they are growing in the right direction. Since Gigi’s is filling up regularly, that should let the team know they are doing things right.