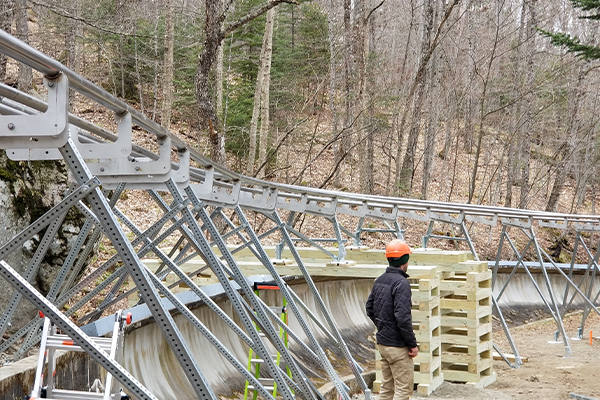 FOR OVER HALF A CENTURY, Luck Brothers, Inc. has been behind the construction of significant landmarks in the North Country. And now the tight-knit team is leaning into its fifty-second year together as it continues to execute numerous projects. There are two sides to this lucrative company. The Luck Brothers, Inc. side, according to the newly designed and released website, is “a heavy highway oriented general contractor, specializing in bridge construction, heavy concrete, utilities, paving, and specialized construction”. The other side, Luck Builders, is “a commercial building firm specializing in industrial buildings, renovations, hospital retrofitting, new construction of office buildings, and multi-family housing”. This array of specialty and variety within the company makes the business a unique asset to clients in the Northeast.

From the beginning, Luck Brothers, Inc. has been a family-run business, started by James Luck and his brother Albert in 1957. The firm was established in 1969 as a sister corporation to Lake Champlain Development. In 1994, that entity was dissolved, and it became Luck Builders, the commercial building side.

The company was run successfully by the brothers, and eventually passed on to the seven children of the original owners. James’ son, Ted, took over as president until his retirement in 2019. Today, ownership of both companies is shared by four siblings: Jeff Luck, President; Cynthia Mayette, Treasurer; Christopher Luck, Secretary, and Jamie Hemingway, Vice President. Ted’s son, Travis, also works for the company as a project manager and represents the proud third-generation of workers continuing the family legacy.

The sons of James were not automatically bestowed glamorous office management jobs. Chris and Jeff explained,“We started out as flaggers and worked our way into equipment operations, and from there progressed into the office and running the corporation. My dad always made sure that we, as kids, started at the bottom and worked our way up.” While flaggers have the most boring job and statistically the most dangerous, the brothers agreed the tough experiences of starting at the bottom build character and create more successful leaders at the top. They have continued the trend with their own children.

Since taking over as company president, Jeff has had a smooth transition to leadership. “My dad had been teaching me all along and we will be doing the same thing with Chris.” The handoff from father to son to brother is a point of pride for the company. To keep a business running smoothly in a family, and to actively employ third-generation members, is a statistical feat. Chris explained, “In our business only five percent of second-generation companies survive. We are not only surviving; we are thriving and we’re looking at the third generation.”

This internal success has helped the Lucks lock down important projects across Northern New York. In 2020, despite the unexpected challenges of the pandemic, Luck Brothers, Inc. was very busy. They built five bridges, working as far south as Saratoga and as far west as Watertown.

In addition, they have worked in various counties of Northern Vermont. One important local project was the Harney Road Bridge in Cadyville. Citing the challenges of the project Jeff explained, “It was not a very big bridge but very deep water.”

Also, in 2020 they completed the Cliffside Coaster located on Mount Van Hoevenberg in Lake Placid. The sturdy tracks expand over 7,800 feet, making it the longest mountain coaster in the Western Hemisphere. The coaster winds along the historic 1980 Olympic bobsled track and riders can control the speed as they peacefully or rapidly descend. The logistics of perfecting the mountain-side rails was a challenging but memorable experience. Jeff spoke of the project saying, “That was a highlight for us. It was a lot of fun to build but extremely challenging”.

The Luck Builders side of the company was equally busy in 2020. Its biggest project was Monaghan Medical’s new facility on Industrial Boulevard in Plattsburgh. The medical manufacturing and distribution company had outgrown its previous location and Luck Builders stepped in to erect a shiny new building for the longtime, Plattsburgh-located company. The brothers described the building as both a “monster” — referring to the size — and “spectacularly beautiful”.

Over the years, various projects of the Luck companies experienced their share of roadblocks, but the COVID pandemic has been one of the biggest difficulties the company has faced. A huge lack of materials was due to nationwide plant shutdowns and prices for essential materials skyrocketed but both divisions remained open as they were deemed essential. The transition to remote working for office staff was relatively smooth but the loss of million-dollar opportunities, coupled with expensive and delayed supplies, made for a stressful chain of months.

Despite the numerous challenges the company has dealt with over the past year and the decades, it has maintained an extremely low turnover rate. The Lucks have employees that joined them at 18 and then stayed with the company until retirement at 65. The welcoming, close-acquainted work environment encourages all employees, not just office employees, to speak up and converse with leadership. Field employees, many of whom are third generation, know their voices are valued at the top. As Jeff put it, “We value their intellectual input as much as their physical input.”

Respect for employees of all levels translates to executing high-quality projects for each of its clients. The Lucks are confident in their skills and as the family generations progress through the company, they foresee successful, timely projects that they can take pride in together.