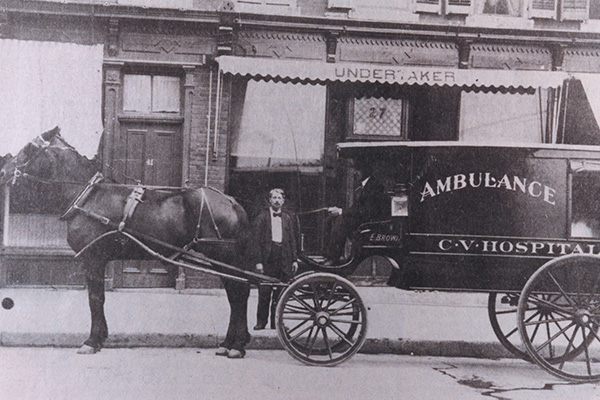 Brown Funeral Home, the oldest continually operating business in Clinton County, was started by Eugene Brown in 1892. At the time Brown was a Customs Officer who traveled daily from Plattsburgh to Montreal by train. Believing there was a need for funeral services in his hometown he began his study of undertaking and embalming in Montreal. When his training was complete, Brown opened for business on River Street – now City Hall Place — in downtown Plattsburgh. At the time he was the only embalmer north of Albany. When a fire destroyed his first location, Brown moved around the corner to Bridge Street and started over. In 1915, after a second fire, he purchased the former Presbyterian parsonage on Broad Street where the business remains today.

As the business grew, Brown was joined by his two sons, Eugene Jr. and Leo. In 1931, Harold Webb joined the funeral home staff. Webb, who was well known as a city Councilman at that time, was also Brown’s son-in-law.

In 1964 the Brown family sold the funeral home to two of its long-time employees, Norman Jabaut and Nicholas Pope. Jabaut had begun his career at Brown’s shortly after returning from World War II. He became a licensed funeral director and served as president of the company until his retirement in 1989. Pope’s first job at the funeral home was as a general laborer. He eventually becoming a licensed funeral director and followed Jabaut as president, serving until 1995.

Continuing the tradition of family succession, Jeffrey Jabaut followed in his father’s footsteps, becoming a licensed funeral director and later president, serving until his retirement in 2009.

Overlapping the Jabauts’ tenure, Warren Bennett began his career at Brown’s in 1980. Today he is president of the company, working with his two sons, Ryan and Michael, as well as Stephen Lapointe. All four men are licensed funeral directors and certified cre – matory operators.

Over the past 15 years, Brown Funeral Home has expanded its services. In 2008, the Bennett family opened Adirondack Memorials and Granite Works next door to the funeral home. The sister company offers monuments and memorials, as well as burial and cremation vaults. Five years later the Bennetts expanded services further by opening Mountain View Crematory. The expansion added efficiency and confidence to the funeral process. “We hated leaving somebody to a third party,” Michael Bennett commented. “Families now have the complete peace of mind knowing that their loved one never leaves our care.”

In 2019, the Bennetts further expanded their services when they opened Adirondack Pet Cremation Service.

In addition to its Plattsburgh location Brown’s also operates community funeral homes in Altona and in Cadyville.