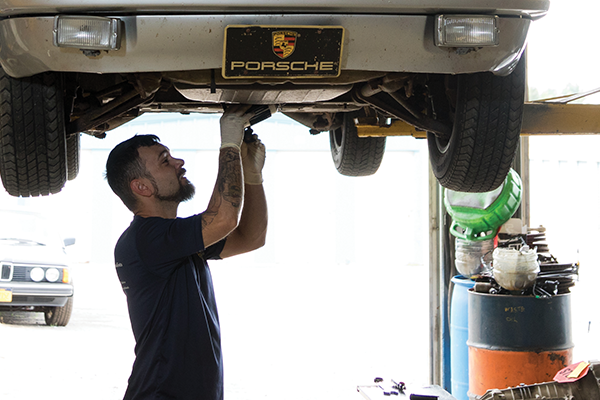 Tom Vagi’s father, a mechanical engineer, rarely took any of the family’s vehicles to a shop. He did his own repairs in their two car garage and taught his children how to fix cars in the process. “Ever since I was a little kid, I wanted to own my own shop,” Vagi, now president and Service Manager of European Autohaus which specializes in European cars, explained.

Vagi started the business when he was 26. He said he figured if it didn’t work out, he wanted to go out of business and be able to try something else by the time he was 30. Things have worked out pretty well and the shop, on the Carbide Road just off the Military Turnpike in Plattsburgh, is busy. On a recent Thursday afternoon, the two-bay shop with four lifts was filled with cars. Vagi explained that Audi, BMW and Mercedes-Benz vehicles are the most common cars that come in, but Volkswagens are frequent clients too. The Autohaus also has a sales component, although there are usually only a handful of cars on the lot. Often customers tell Vagi what they are looking for and he will track it down for them.

Vagi grew up in Plattsburgh and graduated from SUNY Plattsburgh with a degree in International Business and a minor in German. He thought we would either end up in the car business or on Wall Street. The car business won out when he was hired at a Mercedes-Benz dealership in Connecticut. He returned to the North Country to work for an Audi dealer in Vermont and, after gaining experience and training, his childhood dream was finally realized when he opened European Autohaus in 2002.

Vagi is a certified ASE Master Technician – which means that he is certified in eight specific areas of automotive repair. The Autohaus team includes three others – Vice President, Service Advisor and part owner Kent Becker as well as technicians Jeff Pugh and Dylan Latour. “We’re all car enthusiasts,” Vagi emphasized. “We solve a lot of complex problems. A number of our customers are referred to us from other shops when a higher level of expertise is warranted. Finding the answer is always our favorite part. We like the challenge of it,” he said.

The Autohaus sees a lot of classic European cars, especially in the summer time and usually there is one large-scale car project each winter. The group also does full mechanical restorations. There aren’t too many places in the area that do their kind of specialized work. Vagi explained that the business prides itself on its honesty and clarity with customers who truly appreciate that. “We know we’re not the cheapest and we don’t care. Customer service and the quality of our repairs are what matters most to us,” Vagi said.