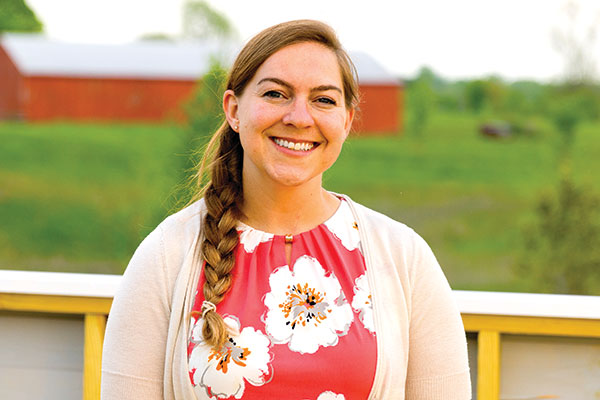 Meg is a councilor and deputy supervisor in the Town of Plattsburgh, elected for the first time in 2014. She currently serves on the finance, audit, water/wastewater, youth services and recreation, buildings and grounds, and ambulance and community service committees. Now in her second year, Meg is especially proud of her role in helping to secure a grant through New York State Energy Research & Development, which named the Town of Plattsburgh as a lead organization in its NY-Sun initiative. The Solarize Adirondack Coast campaign will work with local installers to bring affordable solar energy to homes and businesses throughout Clinton County and northern Essex County. “I am thrilled to be a leader in a program that promotes a sustainable and resilient energy future while preserving our exceptional natural resources in the North Country,” Meg said.
When she ran for the Town Council Meg had two goals. “I wanted to support renewable energy programs and help foster opportunities for young professionals in the area. We’ve made strides in both of these areas, but there’s still so much to be done.” She noted that learn- ing about the town’s infrastructure and having a voice in the town’s capital plan has been the most exciting part of her job thus far. But wait, I’m getting ahead of the story. Let’s go back to the beginning.

Meg LeFevre grew up in Morrisonville, attended St. Alexander’s School in Morrisonville and then Seton Catholic. During her high school years she was active in sports and had a lot of friends, but while her classmates were making plans for college Meg had other ideas. College life just didn’t interest her, so after graduation Meg took on not one job but two. She was working hard and having fun, but then in January of 2001 her world took an abrupt turn. While she was skiing at Titus Mountain in Malone, Meg took a terrible fall. She landed on her head, broke her neck, and was instantly paralyzed from her armpits down. Intensive care, delicate surgery and seemingly endless rehabilitation became her new way of life. She was told she would never walk again. She couldn’t bathe, dress, or feed herself. She was totally dependent on others.

As she looked back on that time LeFevre emphasized, “I didn’t want to be a burden on my family. I knew I needed to learn how to do things for myself. “During the next year she worked to regain her strength and independence. Her goal was to master all the things she needed to be self-sufficient and avoid having to live life in a wheelchair. Gradually she overcame her limitations. In physical therapy she tried a walker and then forearm crutches. It took a long time, but ultimately she became proficient with the crutches. Determined to be independent she moved out of her parents’ home and into an apartment. Even though help was available if she needed it, with amazing resolve she learned to manage on her own.

As her hard work paid off and her health improved Meg began to think about a new future, one that included college after all. In 2006 she moved to Albany where she enrolled in Hudson Valley Community College’s engineering and architecture program. With several of her family members in the building trades, Meg had a lifelong love of construction design and real estate development. She soon learned, however, that she had a natural knack for writing and communication. After two semesters at HVCC, Meg moved back to the North Country and completed her Associate’s degree at Clinton Community College. She went on to earn her Bachelor’s degree from SUNY Plattsburgh in English/ Writing Arts in 2011. As an undergraduate Meg wrote articles for a SUNY publication and won the Hassler Endowment Scholarship while she worked part-time in the Plattsburgh Town Clerk’s office. After graduation she moved to the Clinton County Legislative office as an audit clerk. Meg jokes that she got her wires crossed, working once again with numbers as an auditor instead of an editor. But she made the most of her two years as an auditor, taking advantage of the opportunity to establish several strong professional relationships and learn about the everyday ins and outs of government. “It was an invaluable experience,” she said.

At the same time she began freelance writing for local publications, eventually becoming the editorial coordinator for Strictly Business magazine in 2013. “It was my dream job,” she observed. “I remember telling Betsy Vicencio that I’d pay her to let me do the work. It was a most exciting time in my life. I still reflect on that time with wonder. I got to sit down for face-to-face meetings with some of the most influential business leaders and public officials in the North Country. I counted every day on that job as a priceless learning experience.”

In early 2014 when a position on the Town of Plattsburgh Board opened, Meg was asked to run. Her grandfather, Art LeFevre, had served as Supervisor for 28 years, and you might say politics is in her blood. She ran and won by an impressive margin, but if you think that is the end of this story about Meg LeFevre you would be wrong.

Meg finds time to contribute to her community in a variety of ways. During the 2015-16 school year she taught sixth grade English Language Arts at Seton Catholic. Describing the experience she said, “Returning to the
Seton Catholic family, this time as an educator, has been incredibly fulfilling. The kids are so insightful and we had a great year.”

In the fall of 2015 Meg co-chaired the inaugural Women’s Leadership Summit for the SUNY Plattsburgh Career Development Center. The event, held at the Valcour Educational Center and sponsored by The Development Corp, Woodman Life, and several other local businesses, featured an international speaker. Fifty professional women from across the region attended as well as students from the university.

Meg also serves on the Events Committee for the Adirondack Young Professionals which allows her to focus on one of the goals she set for herself when she ran for office. “The group has had a great couple of years building the organization and creating a strong network for young professionals in the North Country.”

And if all that is not enough to keep her busy, last November Meg took on a leadership role in Mike Derrick’s campaign for Congress in the 21st district. “Mike’s career as an Army colonel, combat commander and professor at West Point has been one of brilliant discipline — I’ve been intimidated by his accomplishments from the start, but he’s the most thoughtful, patient man I think I‘ve ever met, and working for him has been an extreme honor. Aside from gaining insight into how politics operates at a congressional level, I’ve gotten a glimpse into how policy is formed at a federal level and how it affects us locally.”

Meg said working on the Derrick campaign, teaching at Seton, and fulfilling her commitments to the Town of Plattsburgh has been a great balancing act—and a great challenge. But she maintains it’s all a privilege. “The more I learn about the North Country, the more committed I become to working to build a strong, engaged community here. We live in an exceptionally special place.”

Meg takes her responsibilities to the Town of Plattsburgh and her constituents seriously. “I truly care about this town. I’m excited about the development coming in, but we must be careful to maintain a balance so we don’t lose some of the things that make this place special.”