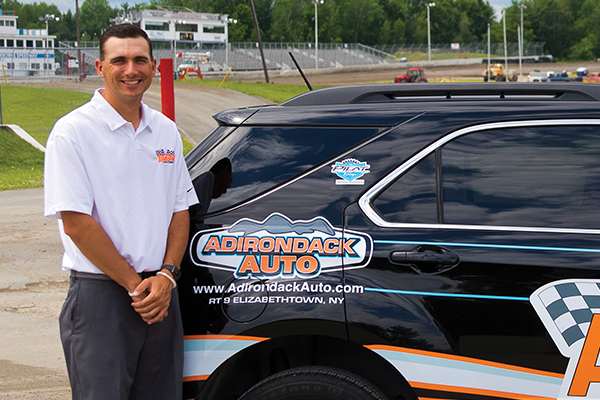 Robby Knowles was four months old the first time he spent a Saturday evening at Airborne Speedway. While he and his mother enjoyed the view from the VIP booth, his father and his uncle were (likely) working as announcers and giving track fans an entertaining evening of racing. “That was my first exposure to the race track which opened in 1954 and it’s been my Saturday night home ever since,” Knowles emphasized.

Today, Knowles leads the charge for Airborne, working as the track’s promoter. “This is my first season in the position,” he said. His father, Rick Knowles, passed away in the winter of 2012. At the start of the spring season that year, Knowles decided to follow his father’s footsteps and became one of the announcers at the track. His uncle, Rob, still works as the lead announcer, a role he’s enjoyed for over 20 years. “There’s certainly a family aspect to it, no doubt,” he explained. “That goes for a lot of the racers and our staff as well.”

Prior to his current role at Airborne, Knowles worked as its Media Director, which involved a collection of responsibilities. “I was doing anything from announcing to radio spots. At the end of last season, the opportunity to purchase — or take over the lease — from the land owners, Steve Fuller and Jamie Atkins — presented itself. I created a new LLC, Plattsburgh Airborne Speedway. Previously it was Airborne Park Speedway.”

Over time, the track transitioned from asphalt to dirt, back and forth, several times. For the 2017 season the track returned to the dirt surface. Knowles explained, “Dirt surface tracks are more popular with the racing community and they can be less expensive. You don’t go through tires as often as you do on the asphalt. Overall, the positives of a dirt track far outweigh those of an asphalt track.” According to Knowles, most drivers who compete at Airborne Speedway view racing as both a passion and a hobby. “Nobody that’s racing here is in it to make money. They’re doing it because it’s something they enjoy,” Knowles offered. Monies are paid out at the end of the night based on performance. Airborne Speedway has six different divisions, each with its own pay – outs for top finishers. “Our top division is the Egglefield Ford 358 Dirt Car Modified Division,” said Knowles.

Airborne Speedway successfully attracts drivers of all ages. “We have a driver from Ballston Spa who is only 11 years old. He picked up a victory in our Sportsman Division a couple weeks back,” Knowles said. “That division is the second highest division at the track. We also have a driver in his mid-70’s who races regularly. While we have quite an age range, the majority of drivers are between age 25–45.”

Although there are many local drivers who race on a regular basis, Airborne Speedway brings in drivers from all over the Northeast. “The competitor who regularly travels the farthest is from Theresa, New York, which is near Watertown,” said Knowles. Drivers and their teams also travel from the provinces of Quebec and Ontario, as well as the New York Capital Region.

The next closest race track in the North Country is the Mohawk International Raceway on the Akwesasne Reservation. There is also Albany-Saratoga Speedway, Cornwall Motorspeedway, and a few tracks east of Montreal. Knowles explained that all of the race tracks work together to collectively share racers, maintain rules and support one another through their common affiliation with a sanctioning body called DIRTcar. “That association means all rules packages are the same and it allows us to share drivers,” said Knowles. “We’ll see some of the drivers who race on Friday here to race on Saturday.”

Prepping for a Saturday night of racing entertainment takes a full week’s worth of effort. Each week starts on a Sunday with Knowles confirming results and completing items from the previous evening’s festivities.

Monday through Friday is a combination of several preparatory actions to ensure Saturday night’s race goes off without a hitch. For Knowles, it’s an investment of 40 to 50 hours each week, not including weekends, organizing and promoting upcoming races, and working with sponsors. “We have a track prep team that works the heavy machinery, which takes place throughout the week. Everything depends on the weather and what we’ve got coming up,” he said.

“Racing usually gets done around 10 o’clock,” Knowles continued. “In the earlier months of the season, racing begins at 6 p.m., but moves to 7 p.m. during the summer months.”

The track’s staff of approximately 75 is aided by volunteers who come out each Saturday night to support the operation in their own unique way. They do track prep, staff concessions, scoring and announcing, help with pit stops, and perform security. “There’s an element of fun involved. If it wasn’t for that, we wouldn’t have the support of all the great people we have,” said Knowles. “We appreciate all of the staff members but the ones that come here and volunteer their time go above and beyond.”

Looking ahead Knowles’ goal is to build a sense of positivity, fun and enjoyment for more people in the region, as well as increase the number of racers participating. “Our staff has done an outstanding job. In general, the team we’ve put together to make things go in 2019 has really knocked it out of the park,” he said. “The support we have received so far has been overwhelming.”

Looking for an evening of fun and excitement? Why not visit Airborne Speedway next Saturday night?