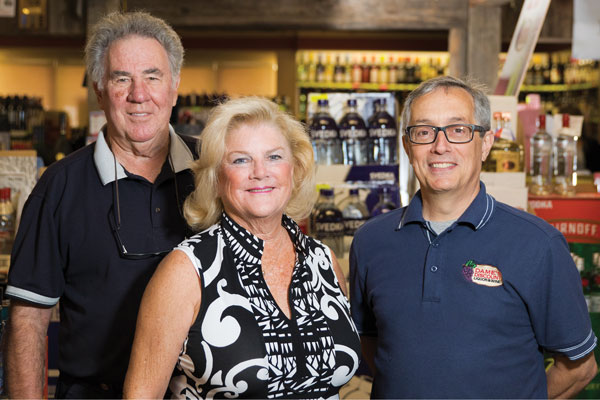 “Have you had the 15-year-old Barbancourt?” Matt Whalen asked his customer. “Fifteen years? I don’t have that one!” the man exclaimed. The man and his wife, both from Haiti, were on their way back home to Montreal from a June weekend
in Lake George. They stopped at Dame’s Discount Liquor & Wine to browse the selection and compare prices, conversing with one another in French while Whalen expertly described the item they were so excited about – Rhum Barbancourt, one of the best rums in the world, and one of Haiti’s most famous exports, produced and bottled by one of the country’s oldest companies. “It’s aged in oak barrels. Not available in Canada,” Whalen continued.

Across the floor, Christina Holland, the store’s resident French-speaker, was bagging another kind of rum—a dark Bacardi—which the customer, Ashley Clark, needed for a Bananas Foster recipe. Ashley’s husband, Ben of Sacred Roots Maple in West Chazy, sent her on the errand, and a friend suggested Dame’s. “It’s my first time here. I didn’t really know what I needed, but they’ve been very helpful,” she commented. Holland Google-ed Bananas Foster recipes, learned a dark rum would be best, and showed Ashley several suggestions.

The employees at Dame’s Discount Liquor & Wine in Plattsburgh don’t just sell liquor and wine, they are masters of customer service, bending over backward and enjoying every minute, to help customers find what they’re looking for. And sometimes suggesting a bottle the customer didn’t know she was looking for!

The store’s prime location, on the corner of Lowe’s plaza, is easy in and out, and it offers a back entrance just a few steps from the Price Chopper parking lot. Having a back door, or two entrances, is rare, and mostly illegal in liquor stores in New York State, but Dame’s has been at the Route 3 location so long its backdoor access was grandfathered in. It’s a sweet provision, considering about 80 percent of its business comes in the backdoor.

Kathy Dame and her late husband, Rod, opened the business in 1972. Tucked between the Red Lyon Tavern and Pearl Vision in the former Ames Plaza, the store had sparsely stocked shelves, with just two or three bottles of certain brands as inventory. Dame recalled their modest start. “Rod’s brother Gary came in as a silent partner and we opened up with just $4,000.”

Friends and local liquor and wine salesmen, Bob Belcher and John Nephew, helped Kathy and Rod stock the shelves for the store’s opening day, something Belcher said would never fly today. “Looking back,” Belcher said, “It’s really been fruitful, that two people could start a business like that and be successful. Rod was a bright man; he could see a lot of things in the future and what to do to help his family along.”

Clad in the casual but sharp employee uniform of a navy blue polo shirt embroidered with the company logo, Belcher discounted himself as an actual staff member, but he’s been a friend to the store every step of the way. His 50 years of experience in the alcoholic beverage industry has been invaluable to Dame’s and a major factor in the store’s continued success.

“Bob’s been a friend of ours since 1972, so he knows a lot about the business. More than I thought he knew!” Dame said with a great laugh. They each lost their spouses to cancer a number of years ago and have now been partners, in liquor and wine sales and love, for the last 17 years.

It was my first time meeting Kathy Dame, and though it was a brief encounter, she conveyed such a genuine happiness throughout our talk that I couldn’t help but comment. “You look happy,” I said. “I am very happy,” she confirmed. “Knock on wood. I found love twice in my life. And here at the business I’m extremely pleased with our help. They’re a godsend.”

She went on to refer to the store’s ten employees as family. As far as retail store employees go, “the help” at Dame’s Discount Liquor & Wine really is an impressive crew. General Manager Bud Randa came on board in 2005… just to work a couple days a week. After spending 26 years in the “crazy, static” restaurant business, he settled in well at Dame’s, appreciating the relative stability of retail. He had a good working knowledge of the strict New York State liquor laws and his cheerful demeanor was a natural fit to fill the position of general manager in 2006.

By all accounts, Randa’s approach to business seems well balanced and practical. “We knew it wasn’t going to stay good forever,” he commented in response to the once high Canadian dollar. “So we did things to reach out to local patrons to get a larger share of that market.” With Randa and Belcher’s guidance, Dame invested in a high-quality point of sale system that tracks customer purchases for a valuable loyalty program. If you’re over 60 years of age, you get 10% off every purchase, likewise for North Country Chamber of Commerce members. On top of that (for the under 60 crowd) purchase points are added up for an occasional $5 off. As Randa put it, “You’re going to buy it anyway, so you might as well get $5 off every now and then.” I’d say the program’s 7,000 members agree.

Randa’s assistant manager, Ashley Grosskopf, is a veteran liquor store employee, having worked for another store in town before joining the Dame family six years ago. Whalen is the customer service manager, a role that suits this ex-banker to a T. When I asked about a nice red zinfandel I recently enjoyed at Latitude 44 (the only detail I remembered was that it began with an A), Holland again went to Google, and within seconds had my preferred wine and its region of origin jotted down on a slip of paper.

Whalen guided me toward the zinfandels in the front corner of the store and proceeded to give me an informative lesson on wines produced in Mendocino County California. I tend to judge a bottle by its cover and/or name, so I was immediately sold on the Gnarly Head red. “Red zinfandel is more potent than white, usually 15-16 percent alcohol as opposed to 13 percent,” Grosskopf chimed in. (No wonder I liked it so much.) “It’s also good with Thanksgiving dinner,” she added.

In the back corner by the rear entrance, customers can find all the New York State wines, including local favorites by Hid-In-Pines Vineyard in Morrisonville, Vesco Ridge Vineyards in West Chazy, and Stonehouse Vineyard in Mooers. Upstairs is an upscale wine gallery for those who look for more than a pretty label and are willing to spend more than $15 on a bottle.

I, apparently, haven’t caught up to the average wine consumer, who Dame and Randa said is very knowledgeable about the product. “It’s not like they come in to get Ripple or MD 20/20. (A poor man’s drink.) They come in today with a list and they want to know the year and how many points it received on Wine Spectator.”

Lucky for Dame’s Discount Liquor & Wine, Randa and his exceptional team have it all covered. “The consumer today is well educated about price and aware of the product,” he noted. “And they’re also the kind of people who are loyal customers. Maybe we don’t have exactly what they want, but if we treat them well and listen to what they have to say, they’ll become loyal customers. And that’s a great feeling for a manager.”