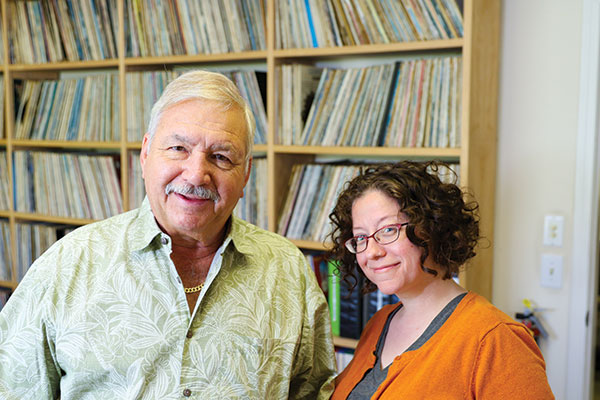 It’s hard to hear the name Bill Santa and not mentally add “Pontiac” at the end. Bill Santa Pontiac was a hometown brand that was so brilliantly marketed back in the day that it has stuck decades after the business shifted into park for good. They don’t even make Pontiacs anymore. The old car dealership, with the biggest sign on Route 3, once thrived on the prime city lot where a Walgreens now stands, next door to where a new Burger King is going up. It’s also the former home of WIRY radio—a true hometown brand and local institution—now under ownership and general management of Bill Santa himself.

For 20 years Santa rented the backyard from WIRY for $100 a month with never an increase. In 1995, when then owner Don Pelkey put the lot up for sale, Santa feared the new owners would build a fence and raise his rent. “Where the heck am I going to put all my cars?” he wondered. He struck a deal with his friend Pelkey, who was really more like family, to purchase not just the lot, but the radio station as well. “I told him, ‘Don, I don’t want to be a radio station owner.’ And he said, ‘Bill, it’s sales just like the car business. You’ll be able to do that.’” Santa looks back on that transaction as the best thing he’s ever done.

For many years Santa split his time between the neighboring businesses with picture windows in each office that allowed him to watch over the whole compound. Connecting phone lines let him conduct business from either end. Although the WIRY station was old and rundown, he called it his happy place. “Whenever the car business would get bad or I’d get upset about something, I’d walk over to my happy place. It was different and it was fun. I enjoyed it.” These days Santa splits his time between Florida and the new WIRY station on Route 9 south of Plattsburgh, making the long trip several times a year, sometimes monthly, driving his Tesla and enjoying WIRY on live stream all the way.

The Area’s First
You might be surprised to learn that WIRY was the first radio station in the local market to stream on the Internet. Despite its traditional feel and comfortable hometown sound, WIRY is a very modern station, said Amanda Dagley, current station manager. She and Santa credit engineer Roy Edmonds and on-air personality Reid Knapp for keeping the station’s technology up-to-date while maintaining the programming listeners love. “Everything that’s old is new again. We’ve gone back to the format we used when I first got here, and we‘ve gone back to playing 45s,” Santa said. If you hear a song from the 80s on WIRY, it is being played on 60-year-old turntables. “They still work and they’re wonderful thanks to our fantastic engineers,” said Santa.

Dagley, recently promoted to station manager, has worked for the station in many capacities for the last 17 years. Her on-air banter, song intros and even crime reports are delivered with a cheery smile. It’s a trick of the trade she learned from Bob Pooler, outgoing station manager now in semi-retirement who is working on his 44th year with the station. From the Air Base closure to the ice storm of ’98, Pooler has had a front row seat to every major community event in Clinton County for nearly half a century. Friends joke that he “came out with the tower.”

Pooler wakes up at 2 a.m. every day to prepare for his “morning drive” show, which fills the 5 a.m. – 9 a.m. slot. To most people, those hours are beyond comprehension, but Pooler does it with pleasure. “I really enjoy doing what I do, talking to the people, entertaining and providing a community service. It’s what we have always done since 1950 when we went on the air,” he claimed. (I’m still stuck on the 2 a.m. wake up call.)

A Community Service
You may not know Pooler and Dagley by sight, but once a listener hears him or her speak, or in Dagley’s case, laugh, the DJs’ cover is usually blown. It’s a would-be curse of the job that is taken more as a blessing; they view their work as much about community service as it is entertainment.

Aside from regular newscasts and an upbeat mix of old and new tunes, WIRY still broadcasts the North Country staples we all grew up with—marching around the table on our birthdays, glowing from having heard our name on the radio and hoping to win a free cake from Rambach’s, losing a dog or cat and having the heroes at Hometown Radio’s lost and found bring it home safely, listening to local high school football games announced from the press booth on crisp fall nights under the lights at Melissa Penfield Park. Add to that newer programs like “What’s for Lunch?” and “Monday with the Mayor” and regular mainstays like Yankees baseball, New York Giants football and Cardinal hockey games. It all makes WIRY 1340 the most popular and well rounded AM radio station around.

FM On The Air
And last year, after decades of work, hundreds of thousands of dollars invested and miles of red tape navigated, WIRY put an FM station on the air. It’s still a work in progress, with tweaks needed here and there with antennas and transmitters, but listeners can tune into 100.7 FM for their favorite WIRY programming. It’s a proud achievement for the whole crew, especially for Pooler. “It’s a lot of fun to tinker with. That’s one reason why I hung in there because I wanted to help with the transformation of it,” he said.

The FM station simulcasts with the AM for all but sports programming. As WIRY’s on-air DJs practice and perfect the technical skills associated with changing the board back and forth between live programs, the station will tailor FM programming to reach a new generation of listeners, giving advertisers a new channel to promote their products and market their messages.

WIRY as King
With a great deal of pride and satisfaction in his voice, Santa reflected on the “old days” of radio. “If you look back 30 years, WIRY was number one. WIRY was king in sound and everything else. And FM radio was really not much. I remember George Bissell, who owned WEAV radio and bought B100 (which is now 99.9 The Buzz), sitting at my desk at the car dealership saying, ‘I just got this new FM thing and we want to put different music on.’ I remember people saying it’s never going to work.” To prove the popularity of AM over FM in those days, Santa said he paid between $7 and $8 per spot for ads on WIRY AM. Bissell sold him ads on WEAV FM for 50 cents per spot. Santa grew his business and his hometown brand by loading up both stations with ads. It’s a simple business choice that brought him success. “Plattsburgh has done a lot of good things for me that I will never forget. There are a lot of good people here,” he said.

It pleases Santa and his crew at WIRY to be able to continue to offer local businesses a proven and affordable channel to advertise their own brands. “It’s unbelievable because it works,” Santa beamed. “People who advertise their small businesses will call us and say, ‘I can’t believe the response.’ They see an immediate return on investment. It’s tremendous.”