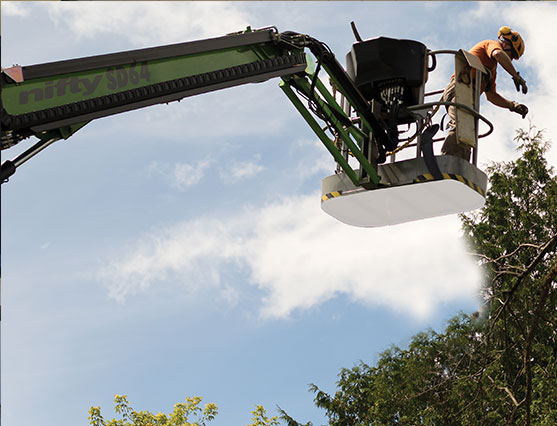 e’s in the air. He’s on the ground. He’s everywhere. Superman? No, it’s John Wheeler, owner of Commercial Site Services, Inc. I’m not sure if he’s faster than a speeding bullet, but he’s darn fast and a self-proclaimed workaholic. Wheeler can do just about anything your site and buildings require, including electrical and plumbing repairs, janitorial work, sidewalks, lawn care, snow removal, excavation, lot clearing, drainage work, remediation, and roofing. Shall I go on?

If you have trees to be limbed or removed, he does that, too. That business is called High Guys Tree Service. Wheeler loves to be busy out of doors at all times of the year. He is licensed and certified and does work in a 50 mile radius of Plattsburgh. He thrives on climbing trees and insists he is good at it and has the moxie it takes to do the job right.

The trees are chipped on site and transferred to his place on the Town Line Road in Cadyville. The chips are stacked for a year or more and then transformed into much sought-after organic mulch which is tested and certified and can be colored to suit the buyer’s taste. You can find the product around commercial buildings such as NBT Bank in Plattsburgh and on playgrounds at Peru Central School.

As High Guys expands, Wheeler plans to begin a bagging operation. In addition to producing, delivering and installing his prepared wood mulch, he will then be able to bag it for sale commercially. He explained that any business could then have its own logo printed on the bags of mulch for sale at their stores.

Making compost is another chapter in his dream that he will pursue in a similar fashion. Also, with large stockpiles of sand and salt/sand mixtures at his disposal, he envisions bagging those products for sale to hardware stores.

Ambitious ideas? Of course, but you have to meet John Wheeler to understand that he is not a man to simply stand idly by and let nature takes its course. He is constantly planning for the future and the only grass growing under his feet is that which he will be mowing for customers.

For his snow plowing business, Wheeler owns dump trucks, front end loaders, an excavator—everything needed for the kind of work he does. He stockpiles the salt and sand mixtures at his storage and supply center on Arizona Avenue on the former Plattsburgh Air Force Base along with his tools and equipment, big and small. Last year he plowed the parking lots at the Plattsburgh International Airport. Wheeler explained that some businesses, such as car dealerships, use their own pickup trucks with plows to keep their lots tidy, but hire him to haul away the large snow piles periodically during the winter season.

Does he have a staff of thousands? Not at all. It is a family affair. Wheeler and his wife Lee Ann are the principals. She does the bookkeeping while son, Ryan, who is in college working on a degree in Health and Wellness Management, works part time in the tree business. A qualified and fully licensed big equipment operator rounds out the regular staff. Wheeler has connection with many other contractors who can be called in to do work for his Commercial Site Services business.

When did it all begin? Wheeler did management work for Imperial Wallcoverings before it closed and also worked for Bombardier. He and a friend started Triangle Electric in 1990. He sold out to his partner five years later and in the summer of 2003, Commercial Site Services was born.

Busy? Yes, but believe it or not, Wheeler would like to be even busier. He has a frenetic personality and thrives on hard work, using his vast experience at many tasks. He is a jack of all trades and master of most. Commercial Site Services and High Guys Tree Service define what service is all about.