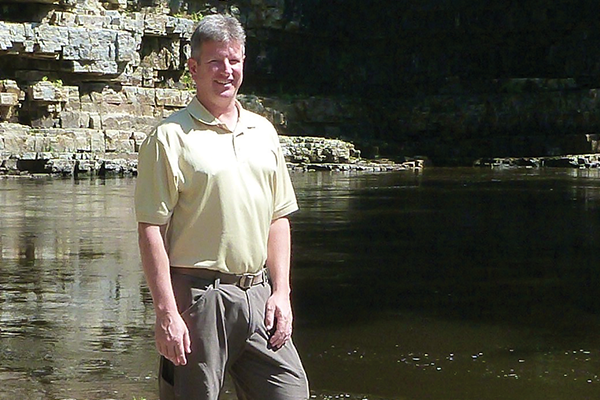 Take a trip south of Plattsburgh on Route 9 and you will drive past Ausable Chasm. Although the Chasm is likely familiar to you, what you might not know is how deep its history runs and what the future holds for this natural attraction.

The Chasm’s sandstone gorge was formed more than five hundred million years ago during the Ice Age while glaciers were melting and moving. It was carved out of Potsdam sandstone* by the rush of the Ausable River on its mile or so decent into Lake Champlain. Some of that sandstone dates back to the Cambrian period** and is more than 500 feet thick.

The Chasm gained national attention in 1870 and may well be the largest, oldest national attraction in the United States. That’s impressive when you realize that its discovery predates the inventions of the telephone, the light bulb and the phonograph! While the Chasm’s past is well documented, General Manager Tim Bresett and his crew are committed to looking ahead to its future.

Growing up south of the Chasm, along the river in Keeseville, Bresett enjoyed the Adirondacks. During his college years he managed restaurants and became a 46er several times over. Looking for a change from the rigors of restaurant management Bresett decided to attend the SUNY-ESF Ranger School in Wanakena, New York to pursue a career in the outdoors. After graduation he accepted a seasonal office manager position at the Chasm under then General Manager Patricia Stone. He stayed only one season before accepting a regional management position with Rural Cellular Corporation. That job lasted for a few years until Stone called one day to ask if he would consider taking over her job. That was 2002 and since then Bresett has worked tirelessly to make Ausable Chasm more than an attraction but rather a destination and it’s working.

The year Bresett took the reins, the Chasm saw just under 40,000 visitors. Last year it hosted upwards of 100,000 guests. That’s over 150% growth. Bresett is proud of what has been accomplished and rightly so but is quick to give credit to his core management team. Caleb Nappi, a retired U.S. Army veteran is the Chasm’s Adventure Program Director / Human Resources Manager; Shayne McCarty, Grounds / Campground Manager; Jonathan Plessis-Belair, Rafting Operations Manager; and Roxy Williams, the Office Manager who has been at the Chasm for 35 years. “I couldn’t do it without them. My people are incredible,” he emphasized.

To promote the Chasm Bresett believes in word of mouth and a good brochure. “You have to have a responsive website but more often than not people respond to a brochure whether it’s a tool for a concierge or picked up at a Chamber of Commerce, rest area or grocery store. Ausable Chasm prints tons of brochures every year— literally five tons — all printed on FSA certified sustainable stock. “If you find somewhere we DON’T have our brochures racked, let me know and I’ll get them there,” he emphasized. The results of the marketing efforts have made Ausable Chasm a highlight for international tour companies.

In 1996 the Chasm took a one-two punch from Mother Nature which brought it to its knees. What North Country residents refer to as a “January thaw” was particularly intense that year. The temperature rose 50 degrees in just 12 hours. Snow and ice melt plunged into the Chasm. The raging floodwaters took out trees that had been established for decades. Steel bridges pulled out of their footings, to say nothing of trailers that were swept away from a campground up stream. Rebuilding began, only to have heavy autumn rains that year cause flooding so severe the area was declared a federal disaster site. All the rebuilding floated away, leaving a half million-dollar tab in its wake.

After the damage Chasm management decided not to replicate what Mother Nature had destroyed but rather to rebuild in a way that allowed guests a better view of the picturesque falls. Today guests who want to hit the trails and take great photographs will find there are footpaths from one to five miles long. For those who want to be a bit more adventurous, the Chasm offers the Adventure Trail via ferrata***, one of only six in the country. Visitors can take part in a tour of the Upper Chasm, crossing cable bridges and a cargo net climb navigating to table rock and floating down through the majestic crack in the earth. At the conclusion of the float tour they can either hike back to the welcome center or take a complementary trolley.

The trails and river float tours have been entirely updated, and there are new of experiences as well. The Chasm now offers lantern tours that guide guests to table rock for a marshmallow roast. The guides offer an incredible wealth of information and the enthusiasm they have for the area means the tours sell out for most of the summer season. Rappelling and rock-climbing experiences are offered as well as mountain biking and disk golf. All of the new opportunities are part of an effort to brand the attraction as a destination, even in winter. “Winters are pretty lean,” Bresett admitted, “but we are open. People can enjoy winter hiking and ice climbing.” Visitor growth would indicate the new opportunities are paying off.

According to Bresett “The growth we are experiencing is sustainable because we’ve grown from the inside out and because of the crew we’ve developed.” In answer to a question about retirement he smiled and said, “Sure, I think about it. I also think we’re coming into our busiest time of year and then next year will be our 150th birthday. I think about a lot of stuff.”

How Much Geology & History Do You Know?

*Potsdam Sandstone is a type of sedimentary rock of the mid-to-late Cambrian age found in northern New York, northern Vermont, Quebec, and Ontario. Ausable Chasm has an exposed section of Potsdam Sandstone which, according to scientists, includes a rare, mid-Cambrian Scyphomedusae jellyfish fossil. **Cambrian Period is thought to have begun about 540 million years ago and ended about 485 million years ago. It marks an important point in the history of life on earth, the period when most of the major groups of animals first appeared in fossil records. It is sometimes called the Cambrian Explosion, because of the relatively short time over which this diversity of forms appeared. ***Via Ferrata is Italian for “Iron Road”. In the 19th century, they were used to access paths too difficult to cross independently. It was popularized during World War I when the Italians living in the mountain range of Dolomoti were trying to help troops move through the tough alpine terrain. Fast forward to today and it has become a popular way for inexperienced climbers to undertake challenges previously reserved for those with more skill and experience. It relies on a steel cable attached to the rock face and other supports along the trail (rungs, pegs, carved steps and bridges) enabling the trail to be enjoyed by those willing to embark on an adventure.