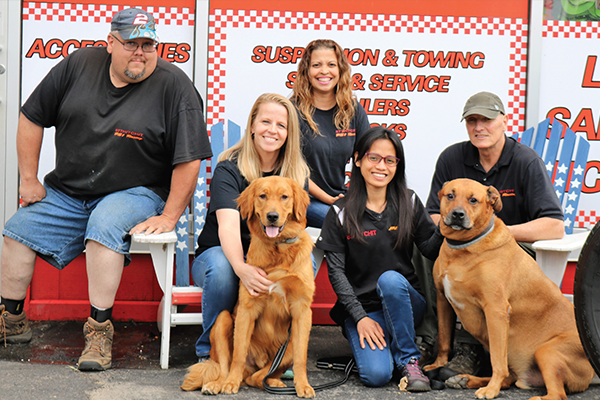 When you ask Kevin Broderick how long he has been in business, you had better pull up a stool because it’s not a short story. It can’t be, because it goes back almost three quarters of a century. “It all started with my dad, Maurice,” Broderick began. “He was honorably discharged from the Navy during WWII after he suffered a significant hearing loss. When he came back home to Plattsburgh, he operated a service station. He saw potential there, so he bought the Post Garage on South Peru Street in 1945.”

As we walked through the property which today is located on both sides of South Peru Street where it intersects with U.S. Avenue, Broderick pointed out the original overhead door that was big enough to allow a horse to pull a carriage through. He explained that originally carriages would be repaired in the bay while horses were walked to a stall to wait and have a drink of water. “There was still hay in the stalls when Dad took it over,” Broderick recalled. “Over the years he made the garage doors big enough for heavy equipment, raised the roof and put in lifts.”

Maurice Broderick liked to keep busy and so he added another business, founding Broderick Motors — a car and truck dealership. He represented Willys Jeep for a time, then Hudson autos and finally he sold GMCs until his retirement in the mid-1990s.

The Broderick family may have been big in the automotive industry but it was also heavily invested in the community. That passion was what drove Maurice Broderick to found Airborne Speedway in 1953 as well as a number of other businesses. Kevin was raised to value the community and to work hard, and he emulates those values in his life today. “My parents woke up every morning and went to work. Dad was the entrepreneur and my mother, Madeline, worked in the office and did the books. I grew up watching that,” he explained. Now Broderick is adding to the family legacy. As a young man, Kevin Broderick left the area to work for the railroad in Virginia. He stayed for almost ten years but when it was time for him to settle down, he returned to Plattsburgh. “My parents’ businesses were very busy and I volunteered to help out,” he reminisced. At that time the demand for heavy equipment and maintenance was driving the growth of the family business. “We had to go to Albany or Montreal for the parts we needed so that we could finish the job for the customers. We realized we could get a lot more done if we were able to stock parts. That’s what we did and Plattsburgh Spring was born.”,

When you talk to Broderick it’s hard to tell what he is most proud of — his family legacy or the team that is helping bringing that legacy into the future. A half dozen employees support the business and all of them take great pride in their customer service. With the exception of mechanic James Goble and Broderick, the people who work the floor at Plattsburgh Spring are women. Dana Howe and Melanie Frechette have been with the company for almost 20 years. “These girls know everything I know and more,” Broderick enthused. In an industry that doesn’t have many women, let alone women in a consulting capacity, customers may not be used to women advising them on things like vehicle suspensions or their tow hitch needs. Sometimes, customers insist on talking to Broderick, which is fine. He wants them to feel confident about their purchases but to address the issue he put a sign behind the counter reading, “Do you want to talk to the man in charge or the woman who knows what’s going on?”

Interaction with the Plattsburgh Spring team feels like dealing with a family, and that’s how they identify. With a chuckle Howe shared, “We fight sometimes. I don’t always agree with him.” Broderick chimed in with a smile and a wink, “I don’t like to be wrong, I guess I just don’t have much experience with it.” In addition to Frechette, Howe and Goble, the team includes Kevin’s wife, Rhea, and several quality canine companions.

Ongoing education is important to Broderick for himself and his team. “I’m proud of the business we do here,” he stated. “My people could sell you anything but when you buy from us, we make sure you’re getting what you need. We could sell you a hitch and it will work but we might just be able to give you some advice about a product that will work even better for you and at a good price.”

From a building that was used to fix hobbled carriages more than 100 years ago, along with a second location across the street, Plattsburgh Spring offers services that range from electrical accessories for private and emergency vehicles to suspensions for both heavy and light duty vehicles, to custom bolts and trailer hitches, and everything in between. They even do warranty work for major auto dealers throughout the Northeast. The company’s solid reputation, based on automotive experience, integrity and commitment to customer service has been earned over decades. Plattsburgh Spring looks back on a strong past and ahead to a bright future.