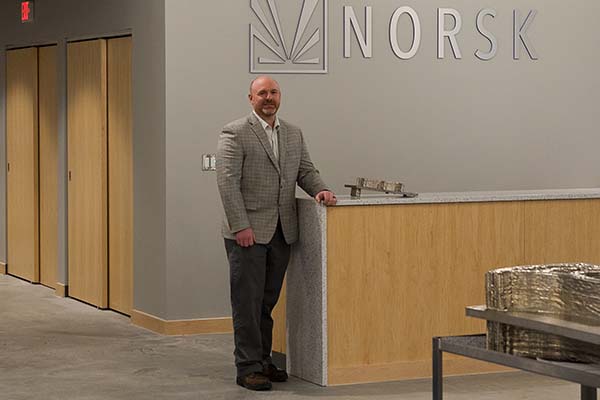 “We’ve adapted as much Norwegian culture into this building design as possible,” said Steve Eaton, Vice President of Operations, as he ushered me past the American, Norwegian, and New York state flags and into the cool, neutral lobby of the new Norsk Titanium building at 44 Industrial Boulevard off Route 3 in the Town of Plattsburgh. “It feels a little minimalistic, but clean and open,” he said as he gestured around the inviting space flooded with natural light.

EYP, an architectural firm based in Albany, designed the facility, and contractor Whiting-Turner built it. Ground was broken in 2018, and construction was finished in December 2019.

From its initial manufacturing operations at 44 Martina Circle, where Norsk “hit the ground running” since startup in 2016, Eaton and his colleagues waited a long time to move into their new, modern facility. “We got the keys and eagerly started to move in,” he recounted, “then COVID happened. We were delayed six months, but we were able to continue manufacturing at the Martina Circle plant, and we developed a hybrid work schedule for our administrative, accounting and IT staff.”

In terms of usage, the new building is divided into three main sections: manufacturing, administration and shipping. Taking up the majority of the space, 60,000 square feet, the manufacturing section has 31 Merke IV® machines with 19 currently installed and running on a clean concrete floor. Already servicing contracts for Boeing and Novabus, Norsk is pursuing other customers in the aerospace, defense, oil and gas, and industrial manufacturing industries.

Administrative staff works in 10,000 square feet of open-concept, collaborative groupings equipped with ergonomically designed office furniture. They are provided with sit/stand chairs and standup desks to alleviate physical problems associated with sitting at a desk for long periods. When the need for a private phone call, quiet work or a one-on-one meeting arises, there are soundproofed breakout offices with names like Fusion, Touch, Plasma, and Forge that can be scheduled on the company calendar. The carpeted flooring keeps noise to a minimum.

In an innovative design decision, the company cafeteria is enclosed in glass walls and sits between the administrative and manufacturing sections. Operators and administrators can see each other and foster stronger working relationships. Unlike manufacturing processes of the past, the Norsk RPD® process is clean, safe and quiet. Other than argon, a colorless, odorless gas that is totally harmless to other substances, there is no waste water, smoke or other residue. The argon is contained in tanks outside the building and can be recycled. The plant is also equipped with a ventilation system that can exchange the entire volume of air in the manufacturing space in less than a minute.

Walking through the modern facility, gleaming silver titanium pipes and tubes neatly traverse the ceilings. The walls are painted “Norsk Blue” a serious dark navy infused with indigo. The aesthetic could be described as state-of-the-art manufacturing with a dash of steampunk, Norwegian style.

With a background in the aerospace and defense industries, Eaton joined Norsk in 2016, soon after its arrival in Plattsburgh. Calling the Martina Circle space “a blessing” during the pandemic, Eaton and his team were able to keep operations running while slowly moving machines and staff to the new facility. Now that the new location is operational, Norsk is keeping the facility on Martina Circle open and running—giving them 150,000 square feet of total work space.

Working in the new facility are a mix of production, machine and manufacturing engineers, operators, IT experts, quality control personnel, accounting/finance professionals, and administrative staff.

Delighted to have been part of the process since the beginning, Eaton detailed the benefits of the new facility. “We already have the machines on site, and have space to grow,” he said. “With supply chain capacity being a real problem these days, we can keep up with demand without significant capital investment. A machine can be fully installed and operational in three months.”

Many of the design and management decisions made at Norsk Titanium in Plattsburgh reflect the values of Norwegian business culture. (Interesting fact: Norsk Titanium’s Plattsburgh employees are sent to visit the home office in Hønefoss, Norway. Eaton has been there over a dozen times.)

A significant factor that influenced the design of the new building is the Norwegian concept of flat management hierarchies. From European Business, an e-paper, February 2022:

“Management hierarchies in Norway are flat. This can be seen particularly in job equality between men and women. It is enshrined in law that 40% of management positions must be filled by women. Decisions are not made by the person at the top of the management pyramid alone. They consult with colleagues and seek the opinion of their employees. Bosses are happy to accept suggestions for improvement. The overall mood of most Norwegian companies is one of friendly collaboration.”

“Team building, collaboration, and reliance on each other are key tenets of our management style,” confirmed Eaton. “We offer our employees memberships at Planet Fitness, and host picnics and parties for their families. Our benefits and wellness programs, and attention to family, are Norwegian derived. We promote a work-life balance.”

Eager to establish a presence in the greater North Country community, Norsk Titanium is a fixture at job fairs. They conduct regular tours of the plant for students at SUNY Plattsburgh, Clinton Community College, Clarkson University, CV-TEC, and area high schools. In addition Norsk maintains a connection to College for Every Student/Brilliant Pathways (CFES). In 2021, the company invested in STEM training at Plattsburgh’s YMCA. They donated a laser printer to The Strand, sponsored science fairs and robotics competitions and contributed to the 4th of July and Battle of Plattsburgh celebrations.

“We are a New York State supported business,” said Eaton. “We try to be open to the community as much as possible. We are also keen to keep hiring. Our piece of the grant is to produce jobs.”

Now firmly established in the North Country business community, and finally ensconced in their lustrous new building, Norsk Titanium looks forward to the next five years and beyond.