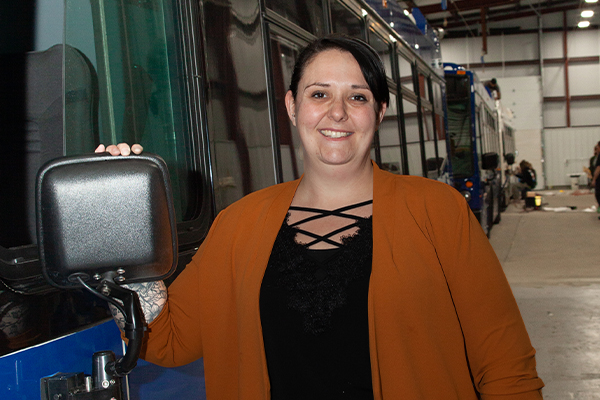 After buses are assembled at the Nova Bus plant on the Banker Road in the Town of Plattsburgh, they are driven a few miles away to Seifert Transit Graphics’ installation headquarters. There they are transformed into custom vehicles for their final destination in places like New York City and Baltimore.

When I conducted our SB interview at Seifert’s Getman Road facility located off the Military Turnpike west of Plattsburgh. I was joined by Alicia Bradt, the division manager. Max Seifert, OEM Account Manager joined our conversation via Zoom from his Rochester, New York office.

Seifert, along with his brother Emmett and his sister Lillian Kehoe are the third-generation in the family business that was started in Utica by their grandfather, John, in the 1970s. The business has evolved from the hand-painted signs that were John’s specialty. When Max’s dad, Jack, came into the business, he quickly realized he did not have the same knack for hand-lettering his father did. That was when his wife Karen – who now serves as the company’s president – suggested they invest in equipment to do digital printing and vinyl cutting.

At the time, John Seifert had a contract to do hand lettering for Orion Bus Industries in Utica. It was that relationship that launched the company’s transit arm. Jack and Karen contracted with Orion to do the graphics on their buses while at the same time continuing to produce banners, signs, truck wraps, and truck lettering. “We were a typical sign graphics manufacturer in those days,” Seifert explained.

By the time manufacturing of Orion buses slowed in the early 2000s, graphics for the bus company made up about 75% of Seifert’s graphics business. “That’s when we changed gears and started focusing on just one market — the public transit industry,” Seifert offered.

Nova Buses
Seifert Transit Graphics created the Plattsburgh arm of the business in 2012 when it began working with Nova Bus. “We started on the production line with them for a New York City bus project,” Seifert recalled. “As the buses were being built, we were there installing the graphics.” When Nova began work on its newest New York City project that required a more complicated graphics package, Seifert began looking for an installation facility in the Plattsburgh area. They moved into their current location in 2018.

Nova Bus’s design and engineering teams work closely with the Seifert team to create the layouts. Seifert and his team then ready that design for production and come up with a layout that can be produced in its headquarters in Oriskany, New York and shipped to Plattsburgh for installation by Bradt’s team. “You can’t ship one big sheet for a 40-foot bus. We must dissect it and make it installable,” he observed.

“Each bus for each project needs to look the same,” Seifert emphasized. “We have to come up with documents for Alicia’s team to know the specific location for each piece of the graphics so that when all those buses are parked in a row, you can’t tell the difference between them,” he explained. “It is not an easy feat to make 500 buses look the same. There’s a lot of work in the background that happens to make everything work.” New York City buses are blue and yellow. Seifert joked that the installation team probably has nightmares about those colors after applying them to hundreds and hundreds of buses.

“Over time we’ve kept up with the pace at Nova and at the same time we’ve expanded our business to include more travel contracts,” Seifert said. “Within the last two years we have begun to work with Alstom (formerly Bombardier) in Plattsburgh, installing graphics on the company’s trains.” In addition to its Oriskany and Plattsburgh locations, Seifert has a team in Rochester, one in Greenville, South Carolina; and a small team in California. The business, which started with fewer than a handful of employees, now has more than 50 – 18 of whom are in Plattsburgh. “The growth we’ve had over the past five to six years has been just amazing,” Seifert said.

Building the Right Team
As a child, Seifert spent his summers with his parents and his grandfather learning the ropes of the business. “I was always tinkering with things and learning the programs,” he recalled. He went on to study graphic design at RIT in Rochester.

After graduation, Seifert spent five years working for other companies and acknowledges that experience helped him become a better leader. He said he is better able to relate to and appreciate his employees. It was his brother who encouraged him to return to the family business where he has worked his way to upper-level management over the past nine years.

Bradt started as an installer at Seifert eight years ago. “I had just left the nest and graduated from college with a degree in clinical mental health counseling,” she recalled. “This was not supposed to be a forever thing, but I fell in love with my job and Max has helped me move into the position I’m in.”

Seifert explained that most of the installation team had never worked with the material before being hired. “It takes a special type of person to work here. We have deadlines to meet every day so it requires someone who is good under pressure,” Bradt explained.

A tunnel that was created within the installation facility is where employee training occurs. “You test into being employed here,” Bradt said. “You don’t just come through the door and slap a sticker on a bus.” The training tunnel has parts that are the exact measurements of the buses that the team will work on. “It takes months and months to get to where my installers are today. They are some of the most talented people in the industry,” she emphasized.

The training program also helps to keep employees engaged and learning new things during the less busy times of the year. “We’re always trying to learn new and better ways to install faster while maintaining quality,” Seifert said. He added that the training tunnel is also used to test different installation techniques and new materials.

Materials and Process
Graphics are printed on materials produced by 3M, the industry leader. The standard material is very forgiving and, “It has some pretty cool properties,” Seifert explained while he demonstrated how, once the backing is removed, it will slide across the table and not stick until pressure is applied. It also has egress technology so trapped air can be pressed out.

Also used is a reflective material made from glass particles that glow at night. That material, however, is not as forgiving. “It has to be right on the money when you put it on,” Bradt said.

“We prime with a special adhesive. We install, then we post-heat to ensure the product is in each nook and crevice that it needs to be,” Bradt explained. “Each of her installers has a quadrant of the bus they typically work on. They disassemble the parts necessary to install the graphics correctly and then put them back together again. My job is to make sure that the end product is perfect and that we have show-quality buses when they leave our facility.” Once the graphics are installed, the buses are brought to Nova Bus’s Customer Presentation Building to be inspected by the client.

Seifert Transit Graphics offers a seven-year warranty on its materials and installation. “When needed we go out and repair and train people to repair their buses,” Bradt said. “If we do our job right, we expect our graphics to look as good seven years later as they did when they went out the door,” Seifert concluded.