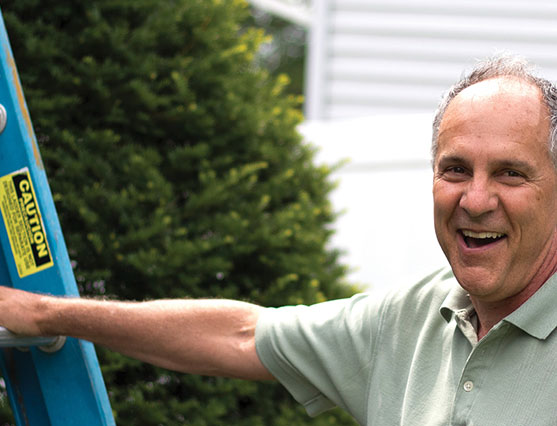 There is no doubt that Ed Woltner has a passion for energy efficiency. The only question is, did his business, Summit Contracting, fuel his passion or was it the other way around? Either way, listening to Woltner talk about energy loss in any type of structure is like watching a symphony performed by the composer—a melodic blend of science, data, technology, and innovation presented with passion, exuberance and hope for the future.

What Woltner forgot about energy usage is more than most of us ever cared to know, yet the colorful tools of his trade make his explanation of even the simplest concept engaging. “The blower door (that red thing filling up the open doorway) is the greatest tool for home energy audits,” said Woltner. “We can create negative pressure in the whole house to see where air is leaking in.”

With an infrared camera, Woltner can see inside the walls to detect breaches in the insulation, settling of old fibers or gaps in the fiberglass. “A one inch gap in your fiberglass insulation in just one bay between the studs in the wall can mean a huge devaluation,” explained Woltner. He was referring to R-value, which is how insulation is measured relative to the amount of thermal resistance it provides.

To demonstrate the infrared camera, Woltner holds his hand on the wall for approximately three seconds. When he focuses the camera on the spot where his hand was, the residual heat is detected in the shape of his hand print. This sensitivity makes the camera useful for identifying structures and gaps inside the walls without cutting into them.

Knowing where studs, wires, pipes, and insulation run through the walls helps diagnose heat loss and the best way to reduce it. But even without all the expensive tools, Woltner can detect issues in heat exchange and ventilation deficiencies by just doing a walk-through. “I’ve been around construction for so long that I can read the signs in a building,” Woltner admitted. “I know what to look for, like excessive condensation on windows, high moisture in basement, shadows of roof rafters melting through light snow cover, prominent drywall joints…they all tell you what is going on with the air exchange and heat loss happening in the building.”

Woltner began learning about what was inside of walls in the 1970s when he did a lot of demolition for salvage. The oil embargo of that decade brought energy conservation to everyone’s mind for the first time in a generation. After working for an engineering firm in various phases of construction, Woltner went out on his own in 1997 and built several houses; energy efficiency was always on his mind.

“Back then, we didn’t have any of the tools or diagnostic equipment to really measure energy efficient houses,” stated Woltner. Frustrated with the lack of attention toward energy efficiency in building standards, and cognizant of the deepening downturn in the construction industry, Woltner turned his attention to existing buildings.

“Current building codes are beginning to incorporate energy efficiency standards, but there are no guidelines for existing houses,” Woltner pointed out. The market is helping to regulate that because people want to save money, the cost of energy is continually increasing and homeowners realize more can be done to reduce their bills.”

Since 2009, Summit Contracting has been performing home energy audits in the North Country through NYSERDA (New York State Energy Research and Development Agency). The energy audits are offered at a reduced cost to residential customers, and NYSERDA offers several funding options for projects that would increase the home’s energy efficiency. Woltner and his crew collect data from the house, plug it into analytic software and generate a report detailing the energy deficiencies of the structure, potential upgrades and payback margins.

“We’re auditing both the energy efficiency and safety of a home,” explained Woltner, “and we never know what we’ll find. In one house, we found a second attic that the owner never knew about which was fully open to the outside. We find a gas leak in one out of every six houses we test.”

Woltner identifies energy efficiency upgrade projects that will pay for themselves in energy savings in a short period of time. “Just because the boiler is old doesn’t mean you need to replace it. If it’s running efficiently,” said Woltner, “your money is better spent in other areas. We also focus on water usage in homes and the hot water system. The average person wastes about 10 gallons of water each day waiting for it to get hot. By increasing the efficiency of the water heater, we can save you time, water and money.”

Heat transfer is the easiest problem to solve, according to Woltner, “although a house can be too tight, and that’s not good, either. That’s why we test the house first.” Exterior walls can easily be insulated from the outside without disturbing the interior at all. A piece of siding is removed so small holes can be drilled into the wall cavity. Insulation fibers are pumped in, the holes are filled and the siding is replaced.

Woltner also points out that old windows don’t necessarily need to be replaced. “By adding storms to old windows instead of replacing them, you can go from R-1 to R-3 at half the cost,” he explained, referring to the insulating value.

Saving money and saving energy are almost synonymous for most of us, which is probably why Summit Contracting has such a wide range of customers. No matter their income level, homeowners are trying to spend less money on energy. In addition, increasing the energy efficiency makes a house more comfortable, improving the view by eliminating condensation on windows, equalizing the first and second floor temperatures, and saving time and other resources.

“Every home, old or new, needs an energy audit. Measure usage, reduce and generate will save energy, save money and help the planet,” exclaimed Woltner with a satisfied grin.