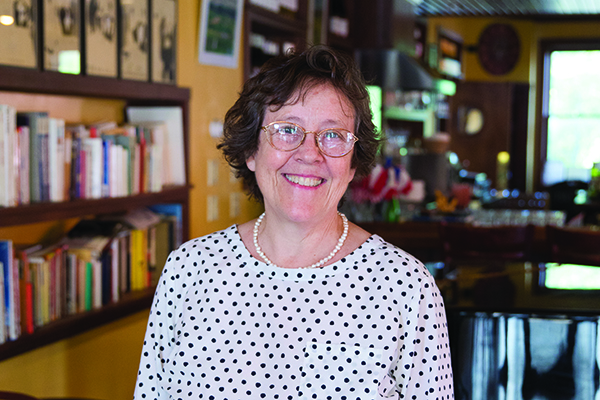 On a sunny afternoon in late August, the long side porch of The Left Bank Café in Saranac Lake, is reminiscent of the most charming cafés in France. Bistro chairs and tables overlook the sparkling Saranac River, while red geraniums hang overhead. This gem of a French bistro has a suitably charming tale, one that involves an American entrepreneur, two cities, and a woman with an enduring passion for food.

Jack Weissberg could have been a romantic character out of a period novel. As a young enlisted man, he was stationed with the U.S. Air Force in France during WWII. He came back to the United States post war to “take the cure” in Saranac Lake, which had become well known for its sanatoriums, or “cure cottages,” some founded years earlier by Dr. Edward Livingston Trudeau. Weissberg fell head over heels for the beauty and charm of the Adirondacks. He returned to France and ran a successful American surplus business, dabbled in antiques, and raised a family in the tiny village of Entrains-sur-Nohain. In the mid-60s, then-president Charles de Gaulle entered a period of strained relations with the United States, prompting Weissberg, his second wife Jane, and Jack’s son Kenneth to head back to the States—to the Adirondacks and the equally tiny village of Saranac Lake.

In 1971, Jack and Jane—who had owned a chain of bakeries in her native Scotland—saw potential in one of Broadway’s oldest buildings, which once had housed a notions shop in the early 1900s. The Weissbergs bought the building and opened a bakery. Jane was soon turning out as many as 500 loaves of bread a day. For Jack’s son Kenneth, Saranac Lake in the 1970s was a sweet place to come of age. “There were hotels, a movie theater; the Water Hole had rock and roll bands weekly and there were other spots for dancing,” recalled Weissberg.

The bakery flourished for many years, but later, as the nation and subsequently Saranac Lake became affected by the recession, it closed and Jack and Jane Weissberg retired. That time solidified Kenneth’s love for his American home, and his respect for the history of the building his family owned. Although he returned to Entrains, he and his wife Noella returned often to visit Saranac Lake.

The Weissbergs saw a kinship between Entrains, the city they called home in France, and their adopted city of Saranac Lake. They cultivated a relationship between the two and that relation culminated in a momentous event in October 1989.

That year, a charter was established and Entrains, in the department (similar to a province or county) of Nievre in central France, was “twinned” with the American city of Saranac Lake.

As France celebrated the anniversary of its independence, the Weissberg family, having forged a connection on both sides of the Atlantic, watched as Entrains’ deputy mayor Jean Louis Allen and
Saranac Lake’s mayor Bill Madden III exchanged keys to each other’s municipalities. Visits were organized for those on the twinning committees from the two regions, an exchange program was formed, and “strong bonds of friendship developed between the families.”

In 2004, Anne Sterling, then an adjunct professor at Paul Smith’s College and a lifelong culinarian, acted as a translator and guide to students on a trip to France. That trip to the Burgundy Region included a visit to the sister city of Entrains and the Maison Des Adirondacks, a stone building in the village which had become a training ground for aspiring chefs studying culinary arts at Paul Smith’s. “Maison Des Adirondacks” is spelled out on the exterior of the stone structure in homage to the rustic Adirondack style and to accentuate the connection between Entrains and its sister city, Saranac Lake. During that trip, Sterling met Kenneth and Noella Weissberg, and a friendship—based on mutual respect for each other’s native homes and a love of food and wine—was born.

The Weissbergs returned often to their adopted home of Saranac Lake. Space in the building on Broadway was leased to various businesses and life went on. Anne Sterling had always wanted her own business, and had looked at storefronts in the village as possible spaces for a one-woman creperie.

Sterling remembered a cryptic conversation with Noella Weissberg. “She said, ‘Just wait a couple of years and your dreams will all come true,’” recalled Sterling. Around the same time, a course of study that was too good to pass up appeared on Sterling’s radar. “It was the course I had wanted to take all my life,” she recalled. Thirty students from all over the world met for an online program offered by the University of Adelaide in Australia: a Master’s of Gastronomy Degree from Le Cordon Bleu. She completed the course in 2010.

Meanwhile, the photography shop in the space where Jack and Jane Weissberg’s bakery had once operated closed its doors. The younger Weissbergs knew they had to take over the space. They hired Sterling to consult on a menu and recruit Paul Smith’s students to work at the café that seemed destined to bring a little bit of France to their beloved town. And so, the Left Bank Café was born. It was to be a simple operation, one that Anne could oversee while continuing her full-time teaching job at Paul Smith’s.

The Left Bank Café was a hit from day one. Black and white subway tiles evoking the Paris metro, green leather banquettes under warm tongue-and-groove wooden ceilings, and vintage Air France posters welcomed diners to the relaxed French café. The owners soon realized they would need to expand the menu to include heartier fare, obtain the requisite liquor license (because wine was a must), and offer live jazz from the gleaming grand piano. Bit by bit they have apportioned more of the building’s main floor, evolving from a gas stove that just recently heaved its final breath, to a “real” kitchen with a “real” chef—turning The Left Bank Café into a “real” restaurant, according to Sterling.

“We have grown from one storefront into another, consulting experts at each phase,” said Sterling. “It’s been fun!” The adjacent storefront is home to the Left Bank Patisserie, which serves French macarons (the Key Lime is an American twist), baguettes, lemon-scented madeleines, and rich molasses cookies. Sterling’s husband, John Alsina, supports the cause using his mechanical skills on everything from piano repair to plumbing. On any given day, French conversation can be overheard, not just among the culinary interns in the kitchen, who are here being mentored by Sterling on summer exchange programs in conjunction with the Maison, but also from customers who have found their way to the charming French hospitality the restaurant has to offer.

As the restaurant evolved, so has the menu. “I had an old-fashioned idea of what the menu should be; authenticity means a lot,” said Sterling “But what is authentic?” Was it the nostalgic cuisine of Julia Child and the French restaurants that had sparked her early love of gastronomie? Or was it the cuisine—both haute and humble—that is ever evolving in Paris today?

“French cuisine is known for being innovative. So if you’re not innovative, you’re not being French!” explained Sterling. With input from its French owners and a very talented chef, the café’s menu is indeed innovative. “Noella loves deep flavors,” said Sterling. “She suggested the Poulet Basquaise as the first dish for the menu back in 2011 and made the first batch herself. With its light, zesty combination of smoked paprika and tarragon, it has been on the menu every summer. The Escargots with Pernod Cream is an appetizer that our chef Tom Ruff made when he was at the Interlaken in Lake Placid. The anise flavored liqueur and snails combine two quintessential French ingredients.” Sterling explained that because France borders other countries, those neighbors have influenced a region’s cuisine.” The “hexagon” borders Spain’s Basque region to the southeast, and Italy to the southwest, where the Salade Nicoise of Provence is a signature dish. Choucroute has its roots in the Alsace region, which borders Germany,” explained Sterling. “Each fall we organize a ‘Tour de France’—a series of regional suppers that are paired with wines of the regions, like Fondue from Savoie, which borders Switzerland, served with a Cabernet Franc.”

“Our team has made good decisions along the way,” said Sterling. She is now the full-time manager and part owner with the Weissbergs, who live primarily in France but visit often. She communicates with Kenneth two to three times per week, making decisions on the couple’s behalf. “I am a steward of their intent and values. Decisions are made with their concept in mind at all times,” explained Sterling. “We know the locals and the summer people take part in Art Walk and support the carousel because art is important to them. It’s fun being part of the community, part of the town.”

The partners’ mutual respect is evident. “I have never met anyone with the level of professionalism and dedication to food that Anne has,” said Kenneth Weissberg. For a woman with a culinary resume four pages long, the Left Bank Café is a dream come true. Of her patrons, Sterling said, “The Weissbergs have a love for this place. I’m proud to be a part of this.”