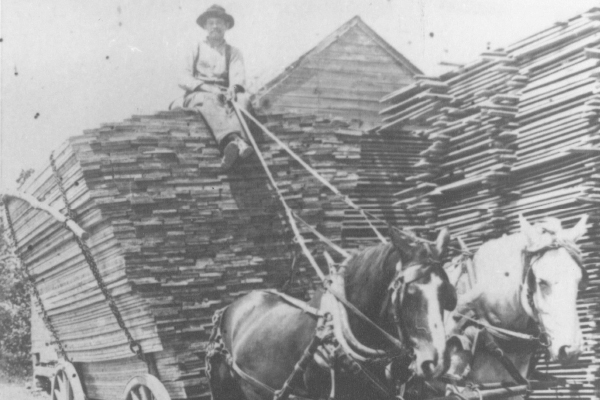 It was a windless wintry afternoon in December, just after a cold snap followed by a few inches of light snowfall. Driving Route 19, also known as the Haselton Road, my Subaru and I meandered along the West Branch of the AuSable River, crossed the Black and Pettigrew Brooks, and passed quiet farmhouses, quaint bridges and a lovingly maintained school building labeled “Haselton School District 1836-1945”. Trying, unsuccessfully, not to be distracted by such beauty and solitude, I was pulled out my reverie by a large colorful sign pointing me toward Haselton Lumber. Veering right into the entranceway flanked by matching stone portals, I steered up the long driveway toward a constellation of buildings that comprise modern-day Haselton Lumber in Wilmington, New York.

Founded in 1901 by Dan Haselton, Haselton Lumber has survived, adjusted and thrived through two World Wars, the tumultuous 1920s, the Great Depression, the terms of 22 U.S. Presidents, various recessions, and a myriad of technological advancements. To put things in perspective, 122 years ago there was no electricity to run Haselton’s sawmill. He used a 10-horsepower Westinghouse steam engine operated by water power or a steam boiler, plus horse power on a treadmill. The original mill burned in 1904, but undaunted, Dan bought a second mill from J. & J. Rogers Company of AuSable Forks (a local paper manufacturer in business from 1902-1971). That second mill is still on the Haselton premises.

In 1953 the company incorporated and later that year, it purchased 1,034 acres from J. J. Rogers. Haseltons was booming with a variety of wood products, wood paneling and hardwood flooring.The sawmill was producing six-million board feet of lumber per year.

“I’m a lumber jockey from Wilmington New York,” said Sam Haselton, current president, and the fourth-generation Haselton to run the company. With over 40 years of experience behind him, Sam is still passionate about the wood business. “I like the industry, and the people. My customers and employees are who I focus on. I can’t do it myself.”

THE STRENGTH OF MULTI-GENERATIONAL BUSINESSES
Like his father, grandfather, and great-grandfather before him, Sam Haselton has been involved with the business from childhood—giving him (and them) a level of experience, knowledge and commitment few outsiders can match. Although Sam, and his father, both left Wilmington as young adults and developed skills in other industries, both came back when they got the call from their fathers.

“As a teenager, I was a tour guide in Lake Placid, then went out West and was on my way to a radio career. (Sam has a clear, robust, rich, and resonant voice). I had been there five years when I got a telephone call from my father to come back and help with the business. He had gotten a similar message—by telegram, as there were no telephones then—from his father to come back from Kansas where he and his wife had settled, and where he had a job as an accountant,” shared Sam.

When asked for the secret behind his success, Sam answered, “There’s nothing like hard work. You need to be present —the first person to come in and the last to leave. No one else will balance your checkbook.” He also shared a laminated piece of paper, on which his grandfather had written the company motto for his father. It read, “A greedy man loses in the end.”

Like many businesses, the COVID-19 pandemic has affected the workforce at Haselton Lumber. Currently employing 17 people (administrative staff, truck drivers, yard workers, and milling operators), Sam, by his own admission, does all the ordering, most of the billing, and routes the trucks. He is currently looking to expand his sales staff. “I appreciate vision. Ninety percent of sales is listening and helping people solve problems. I tell my staff that it is the customer who pays you, not me, and I focus on the customers.”

EVOLVING BUSINESS MODEL
Haselton Lumber’s impressive and well-organized web site includes a timeline of major events in its 122 years in business. It gives a glimpse into a constantly adapting business model, and includes some of the major contributions of various family members. Founder Dan Haselton began with custom wood cutting and milling, and over the decades, the next generations of Haseltons purchased large tracts of timber and did their own managed, selective cutting on what eventually became hundreds of acres. By the 1950s, Haselton Lumber’s sawmill was producing six-million board feet of lumber per year.

Twenty years later, in 1972, after Charles Haselton (Sam’s father) had studied, read about and inspected the lumber industry’s improved methods of milling and manufacturing, he determined it was more practical and economical to buy the finished product. That was when they stopped logging and sold most of their timber land (today they own just 105 acres). The emergence of the box stores like Home Depot, Lowe’s, as well as Curtis Lumber offered contractors and homeowners the most common building products at competitive prices, and that is true today. The unique and important niche that Haselton Lumber currently fills is custom milling. “The business has morphed back to where it started,” said Sam.

Doing approximately 85% of its business with licensed private contractors (but also accommodating homeowners and DIYers), Haselton keeps an inventory of white pine, poplar, clear cedar, knotty cedar, and Douglas fir in the form of cants, a sawn log with four flat slides. They get in up to 48 ft timbers. Except for white pine and poplar, cants are shipped from the West Coast. It is Luke Fournier, and his crew’s, job to turn these cants into whatever the customer wants: moldings,spindles, planks, paneling, timbers, and more, in any shape or design that fits their vision and architectural design. In addition, Haseltons has become one of the few remaining places where a DIYer with an old Victorian home can find pieces to match their existing décor. The showroom and web site can help someone realize their vision.

LUKE FOURNIER, OPERATIONS MANAGER
Enter Luke Fournier. Described by Sam as “vital to the operation”, Fournier started at Haselton as a truck driver in 1999. Originally a logger, and a native of Wilmington, Fournier has expertise with all kinds of wood, and can take trees from rough cut all the way to the finished end. He values the personal contact with people, and said he has a “curiosity of everything that’s possible.”

Taking me on a tour of the milling operation, Fournier showed me hundreds of custom-made knives organized in separate holders along the wall designed to mill wood into various shapes, (also called profiles). While his current collection can meet most any need or aesthetic desire, he can also make knives to shape. Knife sharpening is done there too. Along another wall are thousands of neatly stacked and organized samples labeled with machine settings and dates for customer perusal. As we walked through the shop, hanging on a hook is an old-fashioned “sample chain” (a rope laced with samples) kept there as a conversation piece. Drew, one of Fournier’s workers, who walked through joked, “We wear it as a necklace.”

The residue from the mill work (sawdust and wood shavings) is given to a local horse farm for bedding. Depending on the type of wood used, if the shavings are very soft, they’re given to a nearby cow barn for the calves to sleep in.

What is Fournier’s favorite part of the job? “When the customer puts up what we’ve made and falls in love with it,” he said. Living with his wife in a home he built entirely out of pine (where they raised three daughters, and are welcoming grandchildren), Fournier has a sawmill at home that he uses for his own projects. Proud of his self-sufficiency, the standing joke among his family is, “If Pop can’t fix it, we’re all screwed.”

WHAT’S NEXT?
Still passionate about the business, and with a great respect for what his ancestors built, Sam intends to continue the legacy. He knows it won’t be easy. According to Business Week, the average lifespan of a family-owned business is 24 years. About 40 percent of U.S. family-owned businesses turn into second-generation businesses, approximately 13 percent are passed down successfully to a third generation, and three percent to a fourth or beyond.

Standing under the portraits of his ancestors, and surrounded by memorabilia (like a wooden vice) collected over many decades, Sam Haselton is committed to keeping his North Country employees in well-paying, satisfying jobs, and his customers happy with his products. There is no reason to think he won’t.