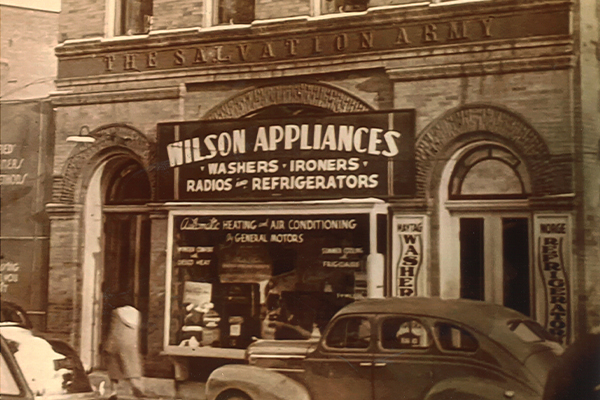 This is a year of celebration at Wilson’s Appliance. EV Wilson founded the business in 1921 as a door-to-door Maytag washing machine sales company. Its first storefront was located on Margaret Street (the current location of Sip restaurant). His commissioned salesmen would meet trains at Dock Street in Plattsburgh, unload gasoline-powered wringer washers from boxcars and load them onto the back of converted Model T Fords. They would then fan out across the North Country selling the machines off the backs of their trucks.

In 1940, when EV’s downtown storefront burned to the ground, he moved the business to 32 Broad Street, just west of what is now the company’s “Scratch & Dent” store. Over the years EV’s three sons, Michael, Jack and Ted, joined him in the business. When the youngest, Michael, took the reins from his brothers in the 1960’s he focused on the service aspect of the business. His steadfast attention to the needs of his customers and his expertise with appliances helped him carve a niche for Wilson’s Appliances.

Mike’s son, Nathan, embraced the family business at an early age. “I remember riding around with my Dad on services calls,” Nate told SB. “He taught me to repair washers and refrigerators. He was a tremendous teacher — patient and loving. He was great.”

Nate worked in the business through high school, helping with deliveries and services calls — anywhere he was needed. That continued during his four years at SUNY Plattsburgh where he majored in Business and Economics. In 1998 Mike Wilson passed away unexpectedly and Nate abruptly became company president and CEO.

After a century in business, Wilson’s Appliance serves the North Country from three locations: the Plattsburgh showroom on Route 3 west of the city, a showroom in Lake Placid and the aforementioned “Scratch and Dent” store just outside the downtown Plattsburgh area. During its years of operation, the Wilsons have also operated appliance stores in Rouses Point, Glens Falls and Elizabethtown. The months since the COVID pandemic began its spread across the country have been like no others, forcing Wilson’s to change some of the ways it does business. When appliances were deemed essential products, Nate and his team adjusted to safely respond to customers. After the initial COVID spike waned in the spring, people found themselves stuck in their homes, staring at their kitchens and appliances. Unable to travel or go out for dinner, many chose to improve their primary investment — their home.

Unfortunately, manufacturing and the supply chain had been seriously impacted. About half of all household appliances are manufactured overseas, and the machines that are made domestically are made in facilities that were not COVID compliant. Normal manufacturing operations, where assemblers work elbow to elbow, were directed to operate six feet apart. The measure and other safety precautions were needed for health reasons but they crippled production at the time when demand was spiking.

“There was no end in sight to the wait times we were running into,” Nate explained. “We told customers we could not guess how long it might take to get their product and they were mostly understanding. Right now, the wait for many appliances — from order to fulfillment — is over six months. To maintain a supply, we systematically place orders.”

Crediting the hard work of his team — many of whom have been with the family company for decades— Nate emphasized, “Our people really know their stuff, in a way that is simply unparalleled in our area. They embody our legacy of the responsible, dependable service our customers have come to rely on. They build our customers’ loyalty.”

Nate described how Wilson’s team member greet customers, asking them not only what type of appliance they are looking for but what type of expectations they have for that appliance. “Do they do the laundry for a football team? Are they first time home owners? Are they looking to outfit a rental property? All of those details are important when pairing someone with an appliance that meets their needs. “We keep that information on file for 20 years,” Nate offered, “so that in the event of a service call years later, we can maximize the efficiency of our response.”

Over the past five years Wilson’s Appliance has forged new business opportunities by expanding its import of European appliances, not only to support the North Country’s needs but also to provide appliances to other dealers and distribution centers across the U.S. and Canada.

When we discussed the future for Wilson’s Appliance, Nate offered, “I believe we can continue on the same trajectory. The retail piece of our business is strong. We can go head-to-head on price and are head and shoulders above the big box stores with regard to customer service and responsiveness. “

To coincide with its 100-year anniversary, Wilson’s is rebranding with a fresh new logo. Additionally, the company has provided plans to double its warehouse capacity and expand the showroom at its Route 3, Plattsburgh location. “Growth is good,” said Wilson, “If you’re not growing, then you’re going the other way.”