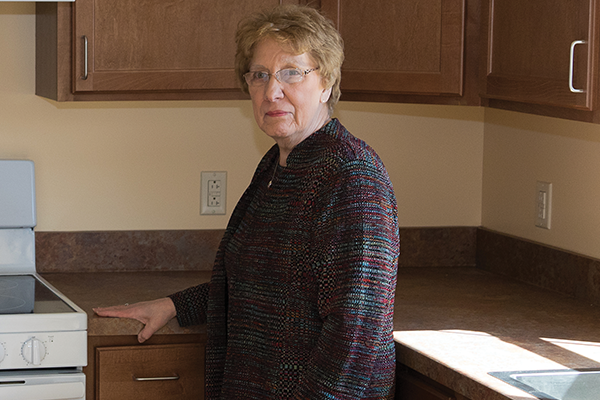 The local chapter of The ARC of New York, Advocacy and Resource Center (ARC), is celebrating a full house that was a long time coming. Connecticut Court, an innovated housing project located on the former Plattsburgh Air Force New Base took nearly two years from the time it received the green light from the town of Plattsburgh until residents began moving in in November of 2018.

“It was waaay back,” Theresa Garrow, ARC’s executive director explained, “when we began planning for this project.” For financing ARC worked with Buffalo-based Affordable Housing Unlimited (AHU) which has part- nered with the Joint Council for Economic Opportunity on projects on the Wallace Hill Extension in the town of Plattsburgh and the Catherine Gardens project in the city of Plattsburgh

“For some time, we’d had clients who wanted to live on their own,” Garrow said. “This project gives them that opportunity and we couldn’t be happier or more proud of them and of the project.”

Connecticut Court has a mandate that 20-25 percent of its residents be people with developmental disabilities. The balance of the residents are individuals or families who met income qualification. “The mix of differently abled residents allows for an integration that is beneficial to everyone,” Garrow emphasized. “Our residents are all people who can live independently with minimal support. This is a proud step forward for ARC and the project helps us as an organization and as a community to comply with the Olmstead Act, a decision of the U.S. Supreme Court that held that unjustified segregation of persons with disabilities constitutes discrimination in violation of the Americans with Disabilities Act.”

Connecticut Court is a stone’s throw away from the ARC administration offices on New York Road on a street named Peaceful Way. “The project went up in phases,” Garrow explained. “Our final count is forty apartments — 20 single bedroom units, 10 two bedroom units and 10 three bedroom units. They are all filled and we have a waiting list!”

The ARC was involved in all aspects of the project from development through completion and remains responsible for its maintenance and operation. Belmont Property Management has been hired to service the project and the goal is to have some of the work done by ARC clients.

Amenities include a community room and coin-operated laundry on site. Each unit has a parking spot — much like any other condo development — but residents don’t need a car to live there. Connecticut Court is within walking distance of Skyway Plaza where there are retail shops, a pharmacy and a grocery store. Discussions are ongoing with Clinton County Public Transit and the hope is the area will soon be included in the South Connector bus route to allow residents more independent mobility. The Peru Central School District will provide bus transportation for students. Now that spring is here, a sense of neighborhood is developing as residents visit the playground and look forward to having a community garden on site.

Now that Connecticut Court is complete SB asked ARC director Theresa Garrow about the experience. She responded enthusiastically. “It’s good for ARC, it’s good for the town and city, it’s a good use of the land. It’s good for everyone, most of all the residents.”