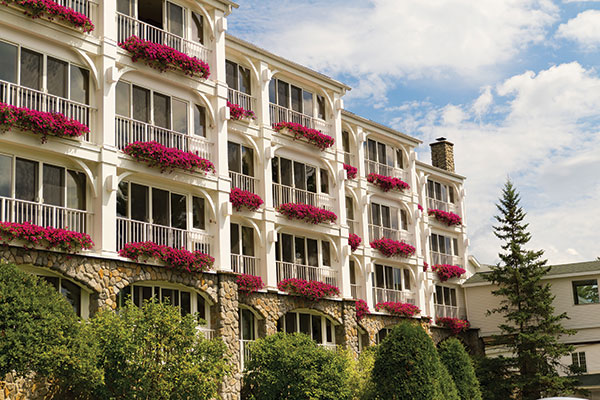 The Mirror Lake Inn is only about 50 miles from Plattsburgh, but visiting the resort that overlooks its namesake on Mirror Lake Drive in Lake Placid feels like a whole different world. The ether of the AAA Four Diamond Inn and all of its extravagant glory transports you to a place far from home. From the richly appointed wood paneled lobby to the luxury rooms and suites, multiple award-winning restaurants and indulgent spa, it is a quick getaway many Plattsburgh residents take advantage of… and if you haven’t yet, you should!

Relax Hard
The world-renowned salon and spa is a frequent destination for locals seeking a day, or even just an hour or two, of relaxation. Of the 24,000 guests who passed through the salon and spa in 2015, an estimated 50 percent were local clientele with the other 50 percent guests at the Inn or other Lake Placid hotels, said Spa Manager Annie Arnold. Having studied Recreation and Leisure Studies in college, Arnold literally has a degree in the art of relaxation. With dozens of treatments to choose from, including several that are exclusive to the resort (Adirondack Maple Sugar Scrub, anyone?), it is the pleasure of Arnold and her staff to help you find your happy place.

Topping list after list of national rankings in publications like Condé Nast Traveler and Adirondack Life, the spa offers a “relax hard” response for those looking to recover from the typical American appetite for extreme hard work and play. Where massage and other bodywork services were once seen as extravagant and overly indulgent practices, Arnold and spa supervisor, Patricia Donald, are happy to see the link between relaxation techniques and overall health become less of a trend and more an interest in long term wellness. Together, the young women oversee 20 employees in the spa and salon — practicing aestheticians and salon employees are all certified.

The spa first opened in 1990 with just one room and one massage therapist. It has since expanded to seven treatment rooms in addition to lavish men’s and women’s sanctuaries complete with steam rooms and whirlpools. “Once you get a taste for taking time out for yourself, (especially women) it makes you better to everyone else in your life,” said Arnold. And men seeking treatment is on the rise as well, noted Donald. “Half the time the men will hang out in the spa area longer than their wives.”

The Secret
If there is a secret to the resort’s success, it is deeply embedded in the history of the Mirror Lake Inn—its reputation for service, cleanliness and professional staff. Owners Ed and Lisa Weibrecht have operated the resort since 1976 and continue to uphold the same high-quality hospitality the Inn was founded on in 1926. Sandy Caligiore, an independent contractor who does PR for the Inn insisted that he is the last cog in the wheel that keeps the Inn relevant and at the top of the industry. He said, “The property is unlike anything you’ve seen in the luxury category. It’s not cookie cutter. It has a lot going for it and it all adds up, but it starts with what the staff presents.”

Caligiore, Arnold and Donald all point to the Weibrecht family’s leadership and active involvement in the everyday operations at the Inn as the number one reason for its continued success. “Ed and Lisa are very involved,” said Arnold. “Their communication with the managers as well as every employee that works here is extensive. Anytime we have a question we can go to them, which is unique.”
“There is no absentee ownership here,” Caligiore confirmed. “Ed and Lisa are here every day. You can set your watch by when they’re coming and that’s important for employees.” In turn, the Weibrechts treat each of their 120-150 employees (it varies by season) “with dignity and respect and require them to have fun at work,” noted Ed. Great wages, benefits and exciting bonus programs keep employees motivated.

Olympic Spirit
“The Olympic connection here is literally alive,” said Caligiore, referring to Andrew Weibrecht, the fourth of Ed and Lisa’s five children. Andrew is a World Cup alpine ski racer and two-time Olympian who has loaned his name and his fame to the Inn’s brand. His silver and bronze medals from the 2010 and 2014 winter games hang proudly in the lobby where front desk receptionists encourage guests to pose for photos. “It’s always a big deal for adults and especially the kids to see the medals and meet him. And now the three of them (Andrew, wife Denja, daughter Adalina) are all included in our website and collateral material. Yes, we are about the Olympics, but we are also about family,” noted Ed. If you have breakfast at the resort’s award- winning The View restaurant Andrew might even stop by to pour your coffee.

No doubt, part of the magic of Lake Placid is the Olympic community. In the summer, athletes dot roadways on bikes or roller skis and swim laps in Mirror Lake. In winter, ski slopes, luge tracks and hockey rinks are full. For professional athletes, all of these high- intensity activities require proper rest and relaxation to recover. “It’s full circle,” noted Arnold, whose regular clients seek services in the spa to keep them in peak health and get them back out on the slopes.

For Caligiore, who is retired from a longtime career as communications director at ORDA and currently services USA Luge, Empire State Winter Games and Lake Placid Lacrosse in addition to his work at Mirror Lake Inn, he understands the Olympic connection better than most and is always sure to step back and appreciate just what its spirit brings to this resort town.

All the Accolades
As far as marketing the exceptional and world renown product that is the Mirror Lake Inn, Caligiore keeps an eye on the organic social media outreach of the spa and restaurants, and managers work together to create a cross promotional buzz under one Mirror Lake Inn umbrella. Donald participates in many wedding expos and other marketing events, including the International Esthetics, Cosmetics & Spa Conference in Las Vegas last year. They also offer a spa club membership for local clientele, and send out monthly emails offering discounts on salon products. Most of all, the business relies on word of mouth and third party endorsements to generate publicity and maintain the well-deserved hype. “You can’t underestimate the third party endorsement; it carries a lot of weight, and that’s really valuable,” said Caligiore.

You can find Mirror Lake Inn listed on TripAdvisor’s Excellence Hall of Fame, and it’s been listed as the number one property in the Adirondacks for several years. The Inn consistently outranks other high-class lodgings across the country on TripAdvisor, the world’s largest travel website with over 60 million members and more than 225 million reviews. Other impressive accolades include:

• Travel + Leisure’s Best Hotels in the United States (by region)
• The I Love New York Travel Bucket List, including a visit to Lake
Placid and a stay at the Mirror Lake Inn
• Condé Nast Traveler’s Most Beautiful Towns in America, including the Mirror Lake Inn as a top resort in the Adirondacks
•Wine Spectator’s Dining Guide Award for Excellence for the past seventeen years

The Mirror Lake Inn Resort and Spa has been AAA Four Diamond rated for the past 32 consecutive years, while The View Restaurant has held that honor for the last nine years. It remains the only Four Diamond dining option in the Northern Adirondacks.

The delivery of all these accolades might fall on Caligiore and his public relations relationships, but he insists, “None of this would happen if it wasn’t for what people like Patti and Annie do, and what the restaurant does, and what house- keeping does. Essentially they turn over to me a product that’s easy to sell, and it’s reliable. When you’re selling the level of service that we sell, and the level of cleanliness that we offer, it makes the job a lot easier. People are willing to listen because they know the reputation of the Inn and that reputation was at a very high level before I ever stepped into this position.”

Connecting Plattsburgh
Looking to the future, Caligiore said he is excited about the evolution of the Plattsburgh International Airport. He recognizes its benefit to the region as a whole. “It’s bringing people in from anywhere and everywhere and they’re literally an hour away. It’s going to help us, not only as the Mirror Lake Inn, but Lake Placid in general.” He anticipates a boom in the next five to ten years and praised Garry Douglas, former chairman of the Clinton County Legislator, Jim Langley and Mayor, Jim Calnon for the work they are doing in Plattsburgh. “It definitely impacts us here in Lake Placid. It will help the whole of the Olympic presentation here.” Plattsburgh and Lake Placid, he said, are like an extended family that goes in both directions.