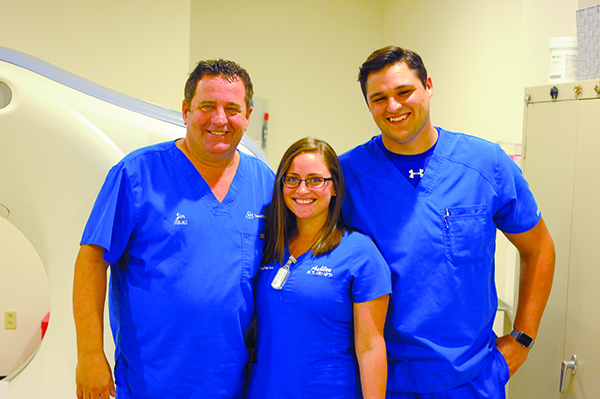 If you had told Jim Morgan Jr. years ago that he’d be operating a medical imaging facility in Plattsburgh and employing his dad, he’d have suggested a reality check or maybe a psychiatric consult.

The junior Morgan was born and raised in the North Country while his dad, Jim Sr., was working at CVPH Medical Center. The younger Morgan is candid about the U.S. Army giving him the challenge and direction he needed when he finished high school; the Army also gave him a trade. He trained as a medical technician and when his military service concluded, he went to work at a hospital in Rochester, NY, and that’s where the whole idea for his business took off.

Morgan’s skill set was an excellent fit for radiology, but it was his entrepreneurial spirit that created After Hours Imaging (AHI). He saw a need for diagnostic services outside the regular 9-to-5 schedule that would allow people an opportunity to get their lab work done on a work-friendly schedule. He realized that not only could he save patients time, but he could also save them money.

Today, Morgan couldn’t be happier. The Plattsburgh office is his fourth AHI location. AHI’s flagship location is in Rochester. “The market there was intense and gave us a great foundation to enter the Plattsburgh market,” he explained.

Morgan used to “moonlight,” offering a mobile ultrasound service to area doctors, and several of them recommended he open an office in the Plattsburgh area. After a little ground work, the Plattsburgh facility has proven to be a great idea. Morgan’s practice is so patient-friendly he is even able to accommodate walk-ins in a timely fashion. “If someone has taken time off work for a medical appointment, that’s a big deal. If they need to take another day off for a diagnostic, that can be a big ask,” he said. “AHI means they might not need to take another day off to get the treatment they need.”

The advantage of a boutique shop like AHI is that it doesn’t have the overhead of a hospital. The rates for everything from ultrasound, vascular, echocardiogram, x-ray, and DEXA diagnostics are negotiated between hospitals and insurance companies. Hospitals have to take significant overhead into account when coming to terms with those rates. These are considerations AHI doesn’t have to reckon with.

Morgan was emphatic when pointing out that he and his team of echocardiogram, ultrasound, and x-ray technicians are not looking to replace the hospital. “Our community needs a hospital. I love CVPH. It fed me and put clothes on my back when I was a kid. I’m not looking to devalue our community hospital. We need a hospital and we need it here!” However, what he and his colleagues offer is options for patients.

AHI promotes transparency that complies with and even exceeds parameters outlined by state legislation. In 2015, the State of New York moved to improve patient education and consumer protection with the New York State Emergency Medical Services and Surprise Bill, also known as New York State Public Health Law §24. The law states that patients can’t be told where to go to get a service or a test done. It also states that rates must be transparent.

“In an age where the technology and costs of healthcare are more complicated than ever, many people have become so trusting of—and even dependent on—providers and yielded their rights as consumers,” Morgan observed. “They believe you get what you pay for,” and spare no expense for quality—especially when it comes to their health.

That belief has encouraged AHI to educate the community in order to eliminate some misconceptions about the costs of diagnostic tests. Morgan admitted the transparency offered with AHI’s service can prompt a bit of trepidation from patients, who aren’t entirely sure if AHI is identical to the same service offered elsewhere when the rates are so disparate. “I use the exact same machines, technicians, and sometimes even radiologists,” said Morgan. “It’s as similar as it can get—without the same cost. Patients need to know that they are consumers with choices.” Morgan recognizes healthcare trends. “More and more people are subscribing to health insurance plans with high deductibles and they need a way to keep costs down. We can help.”

AHI has agreements with radiologists from all over the country. The images they generate are available to the referring healthcare provider online with a final report in under an hour. Physicians can even request the images be read by the radiologist of their choice. Equipment at After Hours Imaging meets all required certification standards. They meet and surpass every Independent Diagnostic Testing Facility standard, offer all same-day services and keep the waiting room small because they don’t plan on patients spending a lot of time there.

Kerry Conroy manages the Plattsburgh practice and got her hustle working at McSweeney’s for over a decade while earning a baccalaureate degree in nutrition. She has built the practice the same way she started her career—with quick and thorough service that goes above and beyond to insure the satisfaction of every customer at After Hours Imaging.

In an effort to spread their educational message, AHI makes community fairs and expos a priority. They offer free carotid and aortic screenings as a means of stroke prevention because, as Conroy pointed out, “sometimes the first symptom is the stroke.” Morgan prides himself on continuing to earn the North Country’s trust and having a staff with the same values. As it has grown its business and its Plattsburgh location at High Peaks Commons for over three years, After Hours Imaging seems to have the formula for picture- perfect success.