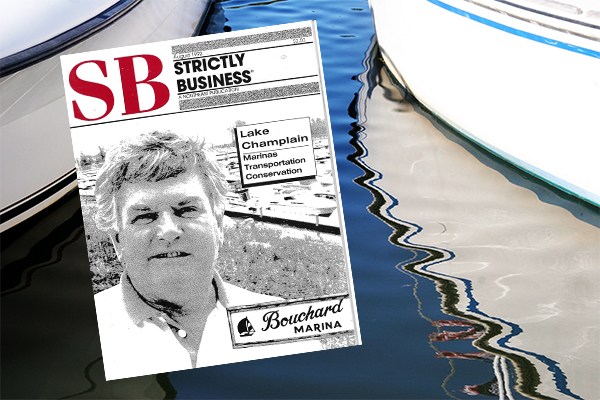 In the mid-1980s Gilles Bouchard was both reviled and admired in the North Country. Born in Quebec, he came to the U.S. at age 19 and found work in construction. After several years working for others, he created his own company – Bouchard Construction – and built a reputation throughout the area for his metal span buildings.

Needing office and storage space, Bouchard bought an old farm off the Calkins Road north of Plattsburgh. The property had no water or sewer system which made it unsuitable for subdivision. In addition, three acres was classified as wetlands.

What to do with the area he could not use?? His first idea was to clear the land along the lake shore to make room for three or four boat slips. Working alone, and using only a small piece of equipment, his progress was slow, but it wasn’t long before the neighbors became concerned. Calls to the Department of Environmental Conservation (DEC) brought Bouchard a ticket for digging in a waterway. He paid the fine, but the experience caused him to think bigger.

In 1985 he decided to explore the idea of a marina and conducted a survey at the Montreal Boat Show. He was enthusiastic when he saw the results and soon thereafter began the permitting process to build an inland marina.

The Lake Champlain Committee and most of his neighbors opposed him, but he was determined to meet every requirement and follow every rule and regulation. He eventually earned the approval of the DEC, the Army Corps of Engineers, the Soil Conservation Department, and the Adirondack Park Agency. He received his permit in the summer of 1987.

With permit in hand, Bouchard was ready to dig. He met with large contractors and heavy equipment operators in the area and bought every piece of equipment they recommended. However, despite all their advice, he soon learned digging in the lake was a more difficult process than he anticipated. Most problematic was the stipulation that no discoloration be released during the excavation process.
To prevent that from happening he wedged the entire work area with 25,000 sandbags, but even that was not always enough.

In addition, weather was a chronic problem. In the spring it was too wet to dig. In the summer it rained so he couldn’t walk, let alone drive trucks and equipment in the area. In the fall there was more rain and, in the winter, if it wasn’t ten degrees above zero, digging was impossible.

Two-thirds of the way through the project, Bouchard stopped. It was too wet and he was too discouraged to go on. He had been working – much of the time by himself — for more than two years, but there was still much left to do. It was then he reached out to a company in Albany to finish the job, but their price came in at three times what he had estimated for the entire job. There was no way he could afford to hand the project off to them. By that time almost no one in the North Country thought Bouchard had a chance to succeed, but help arrived when three area businessmen stepped in to partner with him. The finish line was in sight. Bouchard was re-energized and work was completed in 1990. In the spring of the following year the marina began to accept boats.

In the ensuing years the marina changed names – from Bouchard Marina to Marina Champlain and now to Treadwell Bay Marina & Resort. Along the way ownership changed as well. The marina is currently owned and operated by the Titherington family.

It has been nearly 40 years since Gilles Bouchard set out to create his marina. It was not an easy job. He came close to failure more than once, but today the marina – the largest and the only inland marina on the west shore of Lake Champlain — stands as a testament to his dogged determination and is a mecca for Canadian boaters.