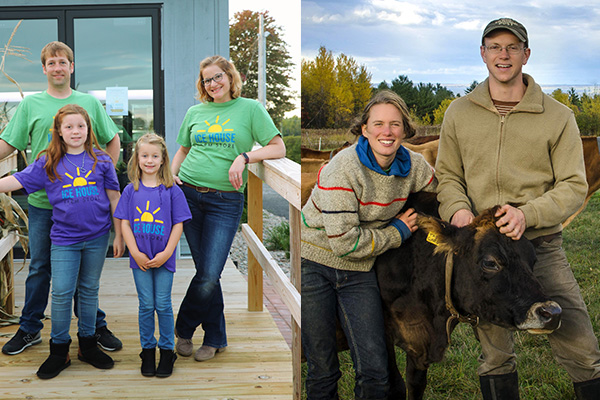 There has been a lot of talk about resilience and innovation in the last couple of years. As we cautiously round the corner from pandemic to endemic we are getting out a little more.

During difficult times, some businesses were able to transition to a virtual model a little more easily than others and some had to engineer efficiency models and learn how to grow with a leaner team. But what about agriculture and what about the family farm? There are a few universal truths about farmers, among them is an impeccable work ethic and tremendous resilience. There is a strength in the consistency of wheedling a living from the earth and farmers — especially family farmers — have never been insulated from the inconsistencies of Mother Nature.

BACK TO THEIR ROOTS

Rachel Dutil grew up in the North Country. “My Dad raised heifers at my grandmother’s farm,” she recalled. “He went over her house before work each morning. Then he would pick us up from the school bus and my sibling and I would go over for afternoon chores.”

Rachel’s husband, Rob Guay, was the third generation born on a working dairy farm in Mooers. When Rob finished high school, he was eager to leave the area, declaring, “I’m not going to milk anything ever again!” Both pursued formal education away from the North Country, but returned for a variety of reasons, among them quality of life.

Dutil is now the Marketing Director at the Miner Institute in Chazy and Guay operates an appraisal business that specializes in agricultural properties. But both continue to feel the lure of the land. According to Guay, “There is a lot of satisfaction that comes from turning the earth into something we can use. That’s why we farm.”

Dutil was driven to serve the community and liked the idea of sharing their offerings at a farm store. When Rob’s parents sold their cows in 2010, they kept the land and the farm house. In 2019 Rob and Rachel purchased the property. Today they are raising beef cows, chickens and pet goats.

In the early 1900s, the Guay property was used to harvest ice from the Great Chazy River which is how they came to name it the Ice House Farm. Unfortunately, early in their first spring on the farm, the barn roof succumbed to weather and the weight of the snow. It was a total loss. Thankfully, no one was hurt and Rachel and Rob spun it into an opportunity to grow the space for their future.

Rebuilding was never in doubt. They built with room for growth. They planned for storage, and spec’d out a commercial kitchen in addition to the farm store. Today, at the store, photos of the ice harvest, along with a few tools from that time hang on the wall. “We sell beef and eggs that we raise on our farm and maple syrup that my husband and brother-in-law produce,” Rachel explained. Nearly everything sold at the Ice House Farm Store is produced within 50 miles of Mooers.”

Beyond the variety of the goods offered, what might be most striking about the store is that it is unstaffed. Yes, you read that correctly. While someone from the farm is probably working around the property and they have video surveillance, the store is unstaffed. Customers are instructed on how to “check themselves out” using a tablet and point of purchase technology. The system is intuitive and supports the self-serve aspect of the store.

The idea of an unstaffed farm store is something that works for North Country Creamery (NCC) in Keeseville as well. The owners operate Clover Mead Farm Store and serve their customers with a model that includes a CSA (Community Supported Agriculture) option.

Ashlee Kleinhammer is the herdmaster at NCC. Originally from the West Coast, she wanted hands-on work in the outdoors and dreamt of operating her own dairy farm. Today, she and her partner, Steven Googin, are living their dream as first-generation farmers of a 115-acre property located on the Mace Chasm Road. The two are grateful to the Open Space Institute and the Klipper Family Fund for giving them a kick start at land acquisition.

Googin grew up in Cazenovia on a five acre homestead his parents established. “Honestly, I don’t know that I appreciated the work they did at the time as much as I do now,” he said.

Googin, who is in charge of the farm’s livestock has nearly tripled the herd in less than ten years. We spoke during calving season and while we don’t want to count our cows before they calve. NCC is excited about its growth this spring in both livestock and farm store offerings.

Ashlee and Steve have made growth a priority since they became owner/operators. Yogurt is something they initiated that has become very popular. They are also excited about some of the changes they’ve made in their cheese case. “We started with a couple of the cheese recipes that the previous owner had developed. The raw cheeses — the ones that have the natural rind — have been phased out,” Ashlee offered. “As much as we loved them, the reality is that they required lots of tending. After careful thought we made the decision to switch to pasteurized cheeses that we can vacuum seal during their aging process.” You will find Havarti, Pepper Jack, and a Dill Farmers Cheese among others at NCC.

There are certain constants with the modern-day family farm — the work ethic, value of community and resilience. But the operational innovation that these farms have been able to achieve in marrying farming and technology is as impressive as it is delicious.

Both Ice House Farm Stand and North Country Creamery work in conjunction with Hub on the Hill of Essex which supports and strengthen the area’s food system. They have a food distribution network that expands market access for farmers by offering delivery services.