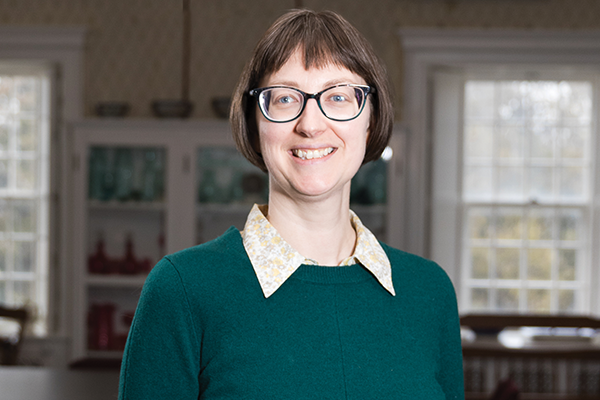 “This museum is a time capsule of what people in the early 20th century thought was worth preserving,” said Ellen Adams, director and curator of the Alice T. Miner Museum in Chazy. “Alice could have created a traditional museum—putting objects in glass cases—but she was in tune with what was happening in other museums at the time. The Metropolitan Museum of Art in New York City, for instance, opened its American period rooms in 1924. In addition, Colonial Williamsburg in Virginia, a living history museum, was also restored and re-created in the late 1920s. In keeping with this idea, Alice created vignettes of settings that people could enter into: a kitchen, dining room, parlors, and bedrooms so people could imagine what it was like to actually live in the past surrounded by everyday objects, art, furniture, and textiles.”

A Colonial Revival museum, The Alice contains approximately 4,000 objects as well as books and archives (letters, cards, documents). Funded with an endowment after Alice Miner’s death in 1950, The Alice has been welcoming visitors for nearly 100 years. “I am proud that we have been able to stay true to the vision of Alice Miner, but be up to date for modern audiences,” said Adams.

How the Museum Got Started

Alice Emma Trainer was born September 23, 1863 in Goderich, Ontario. Raised in a small town, she was orphaned by the time she was a teenager. When she was in her mid-20s, Alice moved to Chicago with her sisters to live near her three older brothers. It was there that Alice met her future husband, William Miner.

Alice and Will courted at the Chicago World’s Fair which ran from May- October 1893. Letters between them detail their many visits and the things they saw. Designed to celebrate scientific and technological progress, art and culture were also on display. It is not hard to imagine that what they saw inspired them both. They married in 1895 and settled in Chicago.

Upon the death of his uncle, William Miner inherited land in Chazy, and began building his model farm, Heart’s Delight. When Alice first moved to the country in 1903, she seemed to be at “loose ends.” As the story goes, her friend from Chicago, Emma Hodge, gave Alice a box of porcelain (china) and encouraged her to start collecting. Soon after- wards, Frank Gunsaulus, her minister from Chicago and a collector of medieval manuscripts, urged Alice to travel and collect as well. Embracing the idea, and with a vision of enhancing culture in a rural community, Alice started with ceramics and glassware, and displayed them in the base- ment of her guest house, Harmony Hall.

While influenced by the Colonial Revival Movement and by other collectors, Alice was a sophisticated collector in her own right. She embraced the decorative arts – ceramics, furniture, textiles, and glass. And her collecting did not stop with objects of everyday life. The Alice also holds smaller collections of beautiful objects and art such as Japanese woodblock prints and a priceless illuminated breviary created around 1475.

Over the years, Alice’s collection outgrew its lodging in Harmony Hall, and in 1916, William bought her the present-day building on Route 9 in the village of Chazy. He expanded it to almost double its size, fireproofed it, and installed a discreet heating system. Alice slowly brought her collection, and thought- fully arranged it into vignettes, or scenes, of everyday life throughout the building’s three floors. She placed the bulk of her ceramics and glass pieces on shelves in the ballroom on the top floor.

A native of Long Island, Ellen Adams, The Alice’s present Director and Curator, holds an M.A. and Ph.D. in U.S. History from the College of William and Mary. In between her undergraduate and Ph.D. work, she spent three years working at the Whitney Museum in New York City. Adams moved here from Saginaw, Michigan, where she had been teaching history at Saginaw State University, when her husband, Joshua Beatty, accepted a position as librarian at SUNY Plattsburgh.

“I’ve always been interested in history,” disclosed Adams. “My family included visits to historical sites in all our travels. As a child, my favorite books were always set in the past. The Little House on the Prairie series was a particular favorite. The most interesting time period to me is the end of the Civil War to the beginning of World War I (1865-1914). This was a time of interesting and rapid change. It is fascinating to see how people processed the way times were evolving. In fact, this era is the time Alice came of age, and started collecting.”

Once she arrived in Plattsburgh, Adams began volunteering at the Clinton County Historical Association, cataloguing collections and organizing the museum, until she accepted a position as assistant to then director and curator of The Alice, Amanda Palmer. Upon Palmer’s departure in July 2014, Adams enthusiastically assumed leadership.

Her favorite object? “A pair of white, elbow- length gloves imprinted with the image of the Marquis de Lafayette,” said Adams with obvious delight. “They were worn by a lady who attended a dance given in honor of Lafayette’s triumphant return to America in 1824. They’re like wearing a t-shirt of a favorite rock band, except they are gloves.” (Fifty years after the end of the Revolutionary War, the Marquis returned to spend a year traveling through America. Visiting all 24 states. He toured factories and farms, paid respects at the tombs of Revolutionary War heroes— his friends—and was feted in every city with speeches, balls, and banquets.)

Before he died in 1930, William Miner created an endowment to fund maintenance, staff salaries, and conservation for The Alice. In addition to Adams, the museum employs Leni Vradelis as Program Director, Becky Favreau, the housekeeper, and Steve Fessette, Facilities Manager. Rounding out the staff are five – six volunteers (docents) who give guided tours, do inventory and archiving, tend the gardens, and decorate.

While the endowment’s investment portfolio is managed by Elwood and Associates, an investment consulting firm in Chicago, a ten-member local board of directors meets regularly to dis- cuss what rooms should be renovated, what items need conservation (the preservation of artifacts, documents, and artwork in order to mitigate the inevitable decay caused by the effects of time and human use), and what capital projects need to be completed.

Kirk Beattie, Vice President, Administration and Finance for the Miner Institute, is a trustee and treasurer of the board. While Adams runs the day-to-day operations of The Alice, Beattie has general oversight of the museum’s current operating budget, assists in planning future projects and as treasurer, works with the museum’s investment managers to ensure there is sufficient cash available for capital expenditures. “Part of my job as treasurer is to manage the portfolio’s liquidity needs.

In the upcoming school budget vote in Chazy, Beattie hopes taxpayers will grant an easement off of the bus loop entrance to allow The Alice to establish off-street parking. “This easement will be of no cost to taxpayers and allows us to create a safer environment for our patrons.” He also hopes to plant more gardens and walkways and create an outdoor entertainment area giving people yet more reasons to visit the museum.

Throughout his 18 years on the job, Beattie is proud to continue the legacy of William and Alice Miner. “The impact they had on the Chazy community is enormous,” he stated. “It is an honor to carry on their cultural mission.”

The Alice T. Miner Museum is open from May to December with guided tours available. Look for special programs throughout the year, such as guest speakers, a weeklong summer camp for children, walking tours of Chazy, and craft workshops.