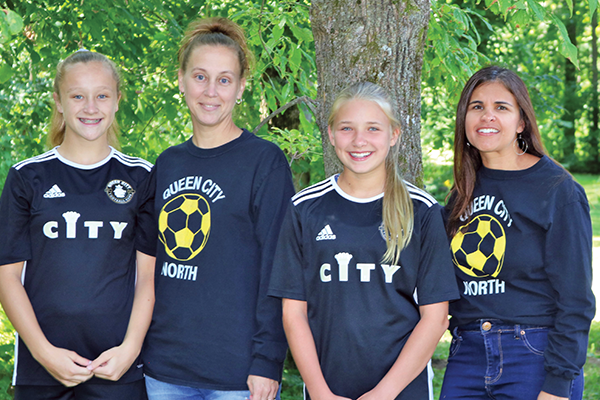 Imagine owning a business and forgetting to list that in your professional bio. This happened to at least half of the women featured in this article. Imagine being so successful that you fail to not only bullet point, bold, italicize, underline and all caps BUSINESS OWNER under your list of accomplishments, but you forget to list it all together.

And we’re not talking Tupperware parties on the side. We’re talking a lucrative real estate venture, a paving enterprise and a construction company. That $180,000 excavator moving earth at the farm down the road — she owns it.

But it’s not their heavy equipment or high-powered day jobs that brought these seven accomplished women together. They met through their tween daughters and the non-stop world of travel sports. With 17 kids between them (ages 3 to 18) and nearly 50 years of combined coaching, this group reached a new level of soccer mom in 2014 when Jennifer Parliament and Michele Derrigo-Barnes signed up their then seven and eight-year-old daughters for travel soccer.

Jennifer and Michele eventually connected with Melissa Rock- McCasland, Christina Ubl, Jenny Damiani, Brandy Ducatte, and Jess Miller. Now all seven of their 12-13-year-old daughters play on the U14 Queen City North travel soccer team. Queen City Football Club is based in Shelburne, VT, but the girls practice in Plattsburgh.

Gone are the days of sports lasting only one season. Soccer and basketball are nearly year-round. Six of the seven girls play on the same travel basketball team and five out of the seven play softball together as well. And their siblings play on their own teams. And their moms all have full-time jobs. And so do their dads. And there are only so many hours in the day, even if mom stays up all night organizing fundraisers for the school family organization or planning the soccer schedule for the entire year. So how do these super moms get it all done?

They lean on each other like family. “If she wasn’t here, I would lose my mind,” Michele said, pointing to Brandy, who is the parent representative for the soccer team. Brandy organizes all hotel accommodations for tournaments, helps with registrations and handles paperwork and payments. Michele is in her sixth year coaching this group of girls, leading them around the Northeast and even to Florida for tournaments. In February 2020, they will compete at Disney’s ESPN Wide World of Sports in Reunion, Florida.

“Obviously we came together over the common bond of soccer but it has evolved into such a friendship. It’s friends for life. These women have an incredible amount of loyalty,” Michele said. For these seven incredibly smart, strong women, that loyalty is intertwined with deep trust, reliability, and gratitude.

For women with careers that require them to take charge, this support system allows them to let go, knowing whatever needs to be taken care of will be. “People don’t realize that we hate being in charge all the time. Being with these women gives us a break,” noted Christina.

Jenny said, “We are pulled in a lot of different directions and we all need help sometimes.” Like the time her whole family, including 12-year-old Gracie got bumped off a flight to Orlando where a soccer tournament would start the next morning. Moms and friends on one side of airport security swiftly shuffled schedules and seats to make room for Gracie. Like a scene out of a heroic sports movie, moments before take off, Jenny rushed Gracie through security. “I was just like, ’Go Gracie!’ I sent my kid to Florida with them and didn’t bat an eye.”

Michele recalled the event, “I felt helpless because I was already in Florida. If it were not for Sue Faus giving up her seat, Gracie would have missed the first game. What a selfless act.”

And there was the time Michele had to bring Jennifer’s daughter, Payton, to the emergency room after a hard fall on the field during a soccer tournament in Essex Junction, VT. Jennifer was at a basketball tournament in Lake George with her son when she heard about the injury. She texted Michele her insurance information. “I knew she was fine with Michele; she insisted I stay in Lake George until we had some news. Fortunately, it was just a sprain. The doctor wrapped her up and Payton went on to score the tournament-winning goal the next day on a direct kick 25 yards out. I never once worried about her, she was in great hands,” Jennifer added. Jennifer did make it to the finals to watch that winning shot!

“As a single mom, I could not do it if it wasn’t for them. These are her other moms,” Melissa said, referring to her youngest daughter Grace. “Often times they take Grace and go because I am in another state with a different child.”

While their daughters get the benefit of having six “other moms” to care for them and watch over them (try getting away with something with seven moms watching) they also see their moms role modeling how to excel in male-dominated fields and be loyal and supportive to each other. And it’s rubbing off on the teenage girls.

Now playing modified and JV soccer for their school teams, some of the girls play for Saranac and some play for Beekmantown. In a recent game against each other the girls had to practice restraint to not hug one another on the field until the game was over. “These girls are very loving to each other and to us. Someone is constantly hugging me,” said Brandy. “They have such a strong bond that it is difficult for them to compete against each other,” Christina stated.

In a world where soft skills can be woefully lacking, this group of girls has already learned and begun to practice the arts of teamwork and conflict resolution, two things Michele said she deals with at work on a daily basis and have carried her throughout her career. “When you learn those skills at a young age and can apply them as you get older it helps you be successful.”

Off the field, the girls are responsible for managing their time between homework, practice, friends, and the volunteer work they do together. The choice to play sports is their own and they prove their interest and dedication by shooting goals for hours in the rain and fielding 100 grounders before bed during softball season.

Several of these moms are lifelong athletes themselves, some played collegiate sports, and they recognize the valuable lessons learned through those experiences and want to ensure their daughters benefit from the same.

“They are learning that, yes, you can do whatever you want, but you have to work for it. Not everything comes easily, but you have the potential to be great if you work for it,” said Jenny, recalling walking on to the SUNY Plattsburgh softball team and working her way into a starting position, not because she was the most athletic player on the team but because she was willing to outwork most of her peers.

Jess said her kids see her work all the time. “They know that if you want to be successful, it comes with a lot of hard work. I want my kids to appreciate work ethic but I also want them to look back on their childhoods with fond memories. That’s a balance I hope I am showing them.”

While it doesn’t appear that any of the girls want to follow in their mothers’ footsteps when it comes to careers (they’ve still got a few years to decide), Coach Michele and their six “other moms” encourage them to step up and take on leadership roles on the field and in school. They’re all smart overachievers who, as far as they know, live in a limitless world where they can be and do anything they want. Why wouldn’t they? With moms like theirs who, through their network of support, brilliantly balance kids and careers and give new meaning to the term “soccer mom.”