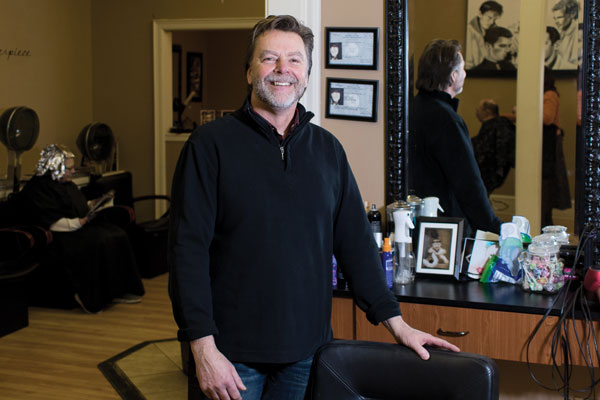 George Munson came to Plattsburgh fresh out of Austin’s Beauty School in Albany after being recruited by Regis Salon in the first Champlain Center mall (now the Lowe’s/Price Chopper Plaza). The year was 1975. Munson’s plan was to stay in Plattsburgh for a year or two, get some experience and then move on. Now, 41 years later, he’s still here.

When asked how he got into hair dressing, Munson explained that his older sister, who was a hair dresser, was an early influence. However, his decision was ultimately made by process of elimination. “At nineteen,” he said, “I was at a crossroads. I didn’t want to go to college.” Munson needed to pick a trade, and his choices where he lived in Schenectady were slim—hair dressing, barbering or welding. Munson didn’t want to go into welding, and barbering just wasn’t creative enough for him. “I picked hairdressing. But it was more of an ‘I have nothing to lose’ kind of thing.”

Munson worked for Regis for four years, then moved to another salon. In 1987, he opened his own salon—Visual Changes on South Catherine Street in Plattsburgh. Over nearly 30 years, Visual Changes has become a second home for Munson and his dynamic staff.

When asked about changes in the industry, Munson reflected, “When I started it was all roller sets and pin curls. You had to have an ashtray at your station for people who smoked. In my day, if you turned somebody’s hair green or purple or red or fuchsia, that was a bad thing.”

Munson is a man who has built a successful career in what is still essentially a female profession, but he fits right in. Sit in his chair for a few minutes and you’ll hear him talk sports with male clients and then shift to talk about her new baby with the hair dresser at the next chair. Outside of work, Munson pursues additional creative outlets. “I like to draw,” he explained, “and I’m in the Champlain Valley Woodcarvers Association.”

When Steven Bailey wasn’t sure he wanted to go to college, his parents suggested he try his hand at a trade. He took their advice and studied at the Phillips Hairstyling Institute in Syracuse. Soon after earning his license, Bailey visited Plattsburgh for a day with friends to shop at the mall. While Bailey waited for his friends, he started a conversation with a woman who was stocking shelves at the (then brand new) JCPenney hair salon. When he told her he had just finished school and acquired his license, she asked, “When do you want to start work?” With his father’s blessing, the seventeen-year-old Bailey moved to Plattsburgh. “And here I am,” he said, “30 years later.”

At first, Bailey worked for others, and then opened a small salon with a partner. After a few years, he was ready for something bigger, but his partner wanted to stay small. And so, in 2009, he opened the Steven Bailey Salon Spa on Upper Cornelia Street next to Starbucks. With the help of eight skilled, seasoned employees, the salon offers hairstyling, massages, manicures, pedicures, and other spa services. Bailey is satisfied with what he has created and doesn’t feel a need for expansion. “We’ve settled in,” he said. “I’m pretty content just the way it is”

“It’s a wonderful career,” Bailey continued. “A lot of the people that I’ve done I’ve had for 25 years. They’re like family. You chat with them every month. It’s fun.” But while he has seen many of the same clients for more than two decades, not everything has stayed the same. Changing style trends help keep things interesting. “Some stay pretty classic,” Bailey said of his clientele. “Some walk in and want pink hair. It’s kind of fun to watch.”

George Munson and Steven Bailey are both well established and well known in the North Country. Both agree that the relationships between stylists and their clients tend to become like those between family members. Munson, however, has a unique take on the phenomenon. “One of the greatest things that ever happened to me,” he explained, “was meeting my wife, Karen…when she came in as a client.”