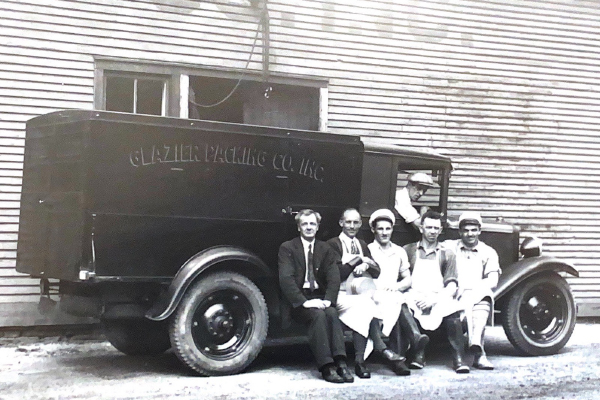 “What is a legacy? It’s planting seeds in a garden you never get to see.” —Lin-Manuel Miranda, playwright

The Glazier family’s success story began in a remote area of the Adirondacks in the early years of the twentieth century. It was then that Howard Glazier opened a small meat and grocery store in the hamlet of Owls Head and a seasonal store in Mountain View. His son, Albon, made deliveries by horse and buggy in the summer and worked in the store during the long winters.

By 1918 Albon was 30 years old and ready for bigger and better things. Malone was only ten miles away and that was where he found opportunity. He opened a small grocery store on Main Street and looked for ways to expand.

Intrigued by the meat business Albon hired Fritz Schwartz, a German sausage maker, and charged him with developing a specialty product. That product – known today as the Glazier Red Frankfurter — was a huge success. Soon the company was turning out not just franks but sausages, bologna, deli loafs, and bacon as well. In 1923 Albon incorporated the business as Glazier Packing Company. The future was bright.

Growth during the next generation was driven by Albon’s son, Everest, who managed the business through the 1950s and ’60s. When he retired in 1971 his sons, John and Howard, stepped forward, jump starting an expansion by purchasing competitor McCarthy, Deno and Coulty Meat Company of Malone.

Another purchase — Pahler Packing of Potsdam, a slaughter plant and meat distribution center — moved the company into a new facet of the business in 1991. The Glaziers operated the slaughter house for three years but then closed it to make the 40,000 square foot building available for the consolidation of the sausage operation from Malone.

In 1997 Glazier Packing joined the Pocahontas Food Group, increasing its product offerings and becoming a full food service distributor. With its manufacturing operation in Potsdam, its Food Service Distribution in Malone and 11 delivery trucks on the road, the company expanded its customer base to a 200-mile radius in New York and Vermont. To accommodate its growth, the Glaziers bought one of the former Tru-stitch manufacturing plants in Malone. The 30,000 square foot building sits on a three-acre parcel located across from the Malone Airport.

By the early 2000’s it was time for the next generation — the fifth — of Glaziers to take control. John’s son, Shawn, a graduate of Ithaca College, was working in the Midwest for Kraft Foods. A call from Dad came at just the right time and Shawn and his wife came home to Malone to start their family and take the company to the next level.

In quick succession Glazier purchased a beverage company, a milk/ dairy operation and a produce company and reached out, establishing relationships with meat suppliers throughout the United States.

To reach internet shoppers, the company developed an online store that offers its signature red frankfurters, specialty franks, pickled sausages and eggs, and bologna. Working with an authorized reseller/distributor in the Albany area, Glazier is able to ship anywhere in the United State including Alaska and Hawaii. Stories abound about North Country families who love Glazier products shipping them to loved ones near and far. They’ve even been sent to U.S. troops in places as far away as Vietnam and Afghanistan.

I recently interviewed both John and Shawn Glazier using Microsoft Teams. John joined from his winter home in Florida, Shawn from his office in Malone. The warmth and respect between the two men was immediately apparent. It was also clear that John is not just an absentee owner. He was quick to offer facts and figures to support the company’s growth.

When asked about his decision to join the family company, Shawn laughed. “This business is in my blood,” he said. “I was packing hot dogs here when I was 14 years old.”

To explain Glazier’s success, Shawn offered, “Diversity is our driving force and it has proven to be the key to all we have accomplished. We continue to look for new products and distributors to work with and ways to expand our food service operation.”

I asked about the impact of COVID. “While many businesses have been negatively impacted, we consider ourselves fortunate,” Shawn emphasized. “Our retail and manufacturing operations have done well. While restaurants have experienced problems, our food service accounts are doing strong To-Go business.” With vaccines on the horizon Shawn was optimistic. “I believe we will see restaurants able to fully reopen by mid-2021.”

Reflecting on the future, father and son projected the manufacturing division – which currently comprises 30 percent of the company — will double in the next five years. “We have a great product that is well received by our customers,” they observed. “We will meet that forecast.”

In closing, John reflected, “I am fortunate I had a son who was interested in the business. I am very proud of him and what he has accomplished.”

My last question involved succession. Will there be a sixth generation Glazier at the helm some day? It is too soon to know how Shawn’s 15-year-old daughter and a nineyear-old son’s career plans will evolve but he seemed hopeful. “My son insists he is going to run the company someday. I can only hope,” he concluded.