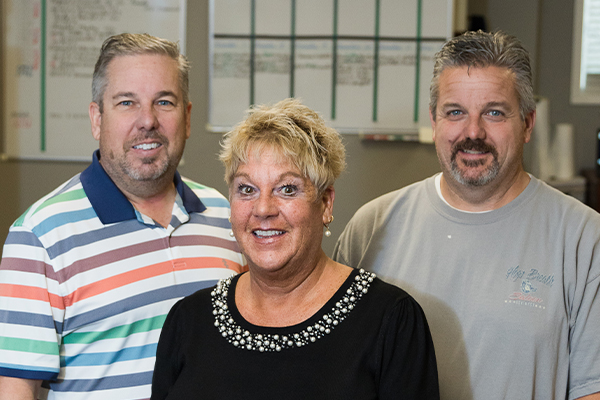 When President Jimmy Carter signed trucking deregulation into law in 1980, new opportunities opened for those who were ambitious, skilled and daring, allowing them to enter the previously closed and tightly controlled trucking business. Three years later, President Ronald Reagan was in office, the final episode of MAS*H aired (and with no VHS, DVD or TiVo, 125 million people tuned in) and Sally Ride became the first American woman to dock at the Space Shuttle Challenger. Locally, Richard Esposito, Sr. began Esposito & Sons Freightlines, a trucking business, in the driveway of home he shared with his wife and five children in Peru, New York.

Richard Sr. moved the business from his driveway to a number of locations. Finally, he purchased land at 6 Graham Street in the south end of Plattsburgh where he built the current constellation of buildings and invested in tractor trailers. Between 1986 and 1989, his management team grew to include three of his young adult children: John, Lisa, and Richard, Jr. Together, they built the trucking business by dedication to hard work, the establishment of traditional practices, an enlightened management philosophy, and a passion for trucking.

Since Richard Sr’s retirement in 1999, and his passing in 2005, the sibling trio has continued to run Esposito & Sons Freightlines using the same business practices and traditions established by their father. The result is they have become a fixture of the North Country business community and trucking industry, providing excellent service for 38 years — and are going strong.

By their own estimate, the business has a ratio of 70% trucking (and warehousing) and 30% maintenance. They are a Department of Transportation (DOT) registered motor carrier and a NYS Certified Inspection station. Facilities and services include:
• A 15,000 square foot warehouse for pickup and delivery
• A 5,000 square foot maintenance and repair facility staffed with expert mechanics
• The transportation of goods within a 500-mile radius of Plattsburgh, and all the way down the east coast to Florida
• Seven loading docks that are long and tall enough to accommodate large trucks
• The space to take in freight from other companies as part of a distribution chain

SIXTEEN TRUCKS AND TRACTORS
Currently employing 13 drivers and two mechanics, Esposito and & Sons Freightlines’ largest accounts are Mold-Rite Plastics and Diamond Comic Distributors, both in Plattsburgh. The company has been in business so long, and built such a reputation, it does not advertise, nor does it have a web site.

JOHN ESPOSITO, PRESIDENT AND CEO; DISPATCHER
“It’s a different industry, a different lifestyle,” shared John Esposito, president and CEO of Esposito & Sons, and dispatcher for long-haul routes. Joining the business in 1984, he described the challenge at the time as “finding their niche”. From his desk in front of a large, detailed whiteboard drawn in a grid — a crucial tool for a dispatcher — John is responsible for managing the schedules of multiple truck drivers, coordinating cost-effective and efficient loads, maintaining communication with drivers en route, and keeping abreast of weather conditions at all drivers’ locations. At the same time, he maintains contact with vendors and customers, and creates records of everything. It is, as he describes, “not a 9-5 job”.

When asked about the impact the COVID-19 pandemic had on his business, John gave a surprising answer. “It presented challenges, yes, but it did not slow us down. Our drivers still did their jobs. In fact, in a weird way it helped our business,” he said. “It increased the value of trucking, an industry most people took for granted. When the store shelves became empty, and the economy shut down, we were there for them.”

It was Esposito & Sons that stepped in when the North Country residents found that local grocery store chain, Price Chopper, lacked in basic food items and necessities. After an emergency call on March 15, 2020 from a Price Chopper executive placed from their Schenectady headquarters, two Esposito trucks were sent downstate, filled and driven north to restock food shelves. This continued for months until the immediate need abated.

According to John, there are still supply chain problems, but these relate to the lack of help at distribution centers — like shipyards and docks — and not local issues.

LISA LAFOUNTAIN, OFFICE MANAGER
Lisa joined her father and brother John at Esposito & Sons in 1986. “I had gotten married and moved away, but I used to visit on weekends,” she recounted. “But over time I was so impressed as they realize their goals and the business grew. After they added the new dock and office space, I joined as office manager.”

Keeping accurate, organized records is a significant facet of LaFountain’s job as is communication with clients. She also does the dispatching for local routes. Using an electric typewriter, a telephone, email, and fax, her methods are old-school, but effective, and have proven in the long-term.

How do the siblings create a professional work environment? “We respect each other’s responsibilities and decision making,” Lisa answered. “We all have our own job to do. If necessary, we can ‘share leadership’ and do each other’s jobs, but we only step in for emergencies, and try to do their job exactly as they would do it.”

RICHARD ESPOSITO, JR., VICE PRESIDENT; MAINTENANCE SUPERVISOR
“One of my favorite memories is working on the trucks with my dad,” recounted Richard, Jr., vice-president and Maintenance Supervisor. “I’m proud that we’ve been able to keep a family tradition going for this long.” Joining the business in 1989, Richard still enjoys working on trucks. “My dad instilled a respect for hard work. His favorite quote was ‘Don’t put off until tomorrow…’.”.

Agreeing with his brother about COVID-19’s impact on the average’s person’s view of the value of trucking, Richard is glad that consumers are starting to realize that nearly everything they touch is brought by a truck. “This industry doesn’t close,” he said. “We are on call 24/7.”

When asked about his management style, Richard cited the Golden Rule. He added, “No favoritism, and don’t ask anyone to do something I wouldn’t do.”

As an exhibit to his history with, and passion for trucks, as well as to celebrate tradition, Richard routinely refurbishes an out-of-service truck, parking it out in front of their facility—when he’s not driving it. “I name all of the trucks ‘Family Tradition’,” he explained. The one out there now is #4.”

CHALLENGING TIMES FOR TRUCKING
“In the U.S. right now, we’re 80,000 truckers short,” Richard explained. [This estimate is corroborated by the current supply chain strains (backlogs and delays) — resulting in empty shelves. Statistics supplied by North Country Chamber of Commerce President Garry Douglas indicated since 2017 the shortage of professional drivers has increased by 20%,
and, if current trends hold, by 2028, the national shortage of drivers could reach 160,000.]

Discussions are underway about streamlining the process to obtain the Commercial Driver License (CDL) required to operate large or heavy vehicles such as dump trucks, tractor trailers, buses, and stretch limos. In order to attract more candidates to the profession, some propose to offer state grants to help cover tuition costs for CDL courses which can add up to thousands of dollars. Work experience required to be licensed is currently six months or more, and it is difficult for any business to afford to pay someone to watch.

Over the nearly four decades Esposito & Sons Freightlines has been in business, DOT compliance requirements have been ever changing. Keeping up with new guidelines, and making sure all equipment and trucks are properly maintained and inspected has always been a daunting task.

ENERGY EFFICIENCY
While adhering to laws and regulations for safety and fairness is always paramount, Esposito & Sons has been, and continues to be, committed to energy efficiency. “We have cleaner trucks with cleaner emissions,” said Richard. “We also continue to use our waste-oil boiler to, not only eliminate waste, but heat the buildings. Radiant heat is used on the floors, and brighter lighting has been installed throughout the warehouse and maintenance facilities.”

IN CLOSING
As an integral part of the U.S. economy, but a challenging business, many trucking companies have come and gone while Esposito & Sons Freightlines continues, using established methods, a thoughtful infrastructure, a mature management style dedicated to reliability, and hard work to stay vital and profitable for going on four decades.

A BRIEF HISTORY OF TRUCKING DEREGULATION
In 1887, Congress created the Interstate Commerce Commission (ICC) to oversee the railroad industry. Over the decades, as motor vehicles proliferated and paved roads were constructed, truckers began to supplant railroads in transporting goods. After persistent lobbying by state regulators, the ICC itself, and the increasingly unprofitable railroads, in 1935 trucking was brought under the control of the ICC.

The Motor Carrier Act of 1935 required new truckers to seek a “certificate of public convenience and necessity” from the ICC. Truckers already operating at that time could automatically obtain certificates, but the ICC was restrictive in granting certificates to new trucking companies.

In addition, the law required truckers to file all rates—also called tariffs—with the ICC thirty days before they became effective. Anyone, including a competitor, was allowed to inspect the filed tariffs. If the proposed tariffs were protested by another carrier (such as a trucker, a regulated water carrier or a railroad), the ICC normally suspended the rates pending an investigation of their legality. In 1948 Congress authorized truckers to fix rates in concert with one another. Called the Reed- Bulwinkle Act, it exempted carriers from the antitrust laws.

The effect was to stifle competition from new carriers. To enter a particular market, truckers had to purchase the “rights” from an existing trucker. By the 1970s, the rights to carry certain goods on certain routes were selling for hundreds of thousands of dollars. Because the ICC disapproved of “trafficking” in rights, it was hostile to mergers and purchases and attempted to restrict authority as much as possible. In short, ICC regulation reduced competition and made trucking inefficient. Because routes and the goods that could transported over them were narrowly specified, truckers with authority to carry a product, such as tiles, from one city to another often lacked authority to haul anything else on the return trip.

After much research and debate, in 1980, President Jimmy Carter signed two landmark pieces of bipartisan legislation into law: the Motor Carrier Act (MCA) of 1980 and the Staggers Rail Act. The MCA removed federal entry controls in interstate trucking and made it easier for carriers to reduce rates — benefiting consumers, shippers and the trucking
industry itself. The Staggers Rail Act deregulated railroad rates for some traffic, and also allowed the ICC to deregulate rates for other traffic, permitted railroads and shippers to negotiate unregulated contract rates and established criteria for regulating rates. The legislation also made it easier for railroads to discontinue offering service on unprofitable
routes, and it ended “open routing,” which allowed shippers to force a railroad to carry freight between virtually any two points on its system.

After signing the bill, Carter said he hoped the new law would thwart “excessive and inflationary government restrictions and red tape.” He stated that the goal was to reduce the price of goods and increase inefficiency by forcing truckers to compete, and to make it possible for new trucking companies and truckers to enter the business.