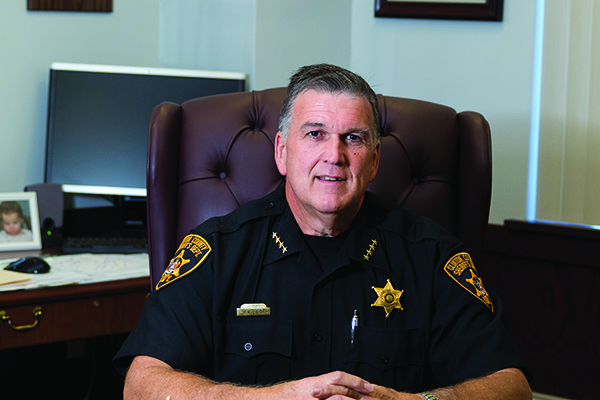 Compassion. A sense of humor. Attention to detail. Ethical and professional responsibility. Creativity. Self-reflection. Verbal and nonverbal skills. Critical thinking. Teamwork. A thorough knowledge of the law. These are the qualities of our area law enforcement officers.

Their jobs are challenging and ever changing. They must rely on their experience, intuition, and judgment in the face of rising criticism and calls for more transparency. The addition of technology makes the job more efficient, yet more complicated. Computers are everywhere, including in patrol cars, and use of surveillance video can make solving a crime easier. However, since everyone now carries a cell phone that can take photographs and record video, officers are aware that they are being observed closely. Getting out in the community and talking with people is crucial in forging bonds of trust.

This month, I spoke to three leaders of our area’s law enforcement. Their combined years of experience comprise many decades. They share a profound commitment to our community, have a firm hand on the pulse of today’s challenges, and are on duty 24/7.

“Every day, I have the honor and privilege to serve in this position,” said Sheriff David Favro. “Having the respect and support of people gives me the drive and energy to make a difference.”

A 1979 graduate of Mount Assumption Institute, Favro earned a degree in criminal justice from Clinton Community College, and had begun studying accounting at SUNY Plattsburgh when he had an opportunity to apply for the Plattsburgh City Police Department. Passing the exam, he began as a patrol officer in 1982. After six years in the department, he was promoted to detective, a career he enjoyed until 2002. During his tenure, Favro was responsible for starting the Drug Abuse Resistance Education (DARE) program in Plattsburgh (in 1989), which involves every fifth-grade class in Clinton County, and the Police Athletic League (PAL) which now engages nearly 1,000 youth. Favro is the only elected law enforcement official in the county. He was first elected in 2002. He has since been elected four times and plans to run for re-election in November 2018.

“Campaigning is how you treat people. I go to every parade. I get to meet people, and see what is going on throughout the county. It is nice to get out to these events,” said Favro.

Asked about his daily routine, Favro shared that the most exciting thing about his job is that there is no routine. “I begin my day very early with a visit to the Clinton County Jail to feel the climate, review the reports, and meet with the first-line command staff. Then I meet with the patrol chief, look at my messages, and respond to whatever is going on.”

When he took over the jail, it had 97 beds. After an extensive renovation in 2007, it expanded to 300 beds, and can now house up to 270 inmates (to comply with the 90 percent corrections standards classification).

The drug problem is a particular challenge of late.

“I’m a big advocate of finding out what’s causing it,” said Favro. “We’re not going to be able to arrest our way to success. Addictive substances restructure a person’s brain, leading them to make unfortunate choices that sometimes land them in jail. I was invited as a guest speaker to the recent Lights of Hope event sponsored by the Addict’s Mom group at CVPH. Instead of going in uniform, I decided to go in plain clothes, and mingle with the crowd. I learned so much from them!” he exclaimed. “One particular thing I learned is that the system can make those who are addicted to drugs feel worthless. That made me resolve to focus on trying to change the attitudes and behaviors of our law enforcement personnel toward drug users. I am putting more resources toward counseling, treatment, and most especially, follow-up. Sometimes people in recovery don’t have anyone to help them maintain their sobriety. We need to do a better job with this,” he said.

“My biggest challenge is keeping the campus safe,” said Chief Jerry Lottie of SUNY Plattsburgh University Police. “Although this may seem obvious, in light of recent events on college campuses across the country, the challenges of keeping a campus safe are more apparent and demanding than ever. Issues such as free speech versus campus safety, keeping violence off campus, and responding to major incidents are major concerns. College campuses seem to be at the center of many of these issues,” he said.

Lottie grew up in the Canton area, and earned an A.S. degree in Criminal Justice from SUNY Canton. He began his career at St. Lawrence University as a security officer, gaining five years of experience, then spent 15 years as a public safety officer at SUNY Canton, where he climbed the ranks to lieutenant. In 2000, Lottie accepted a position as an investigator in the campus police force at SUNY Plattsburgh, earned the rank of assistant chief, and was promoted to chief in 2015. He continued his formal education along the way by earning a B.A. degree in Police Management from Empire State College and pursued graduate work in administration and leadership at SUNY Plattsburgh.

“Once I started working at St. Lawrence University, I discovered I really liked working in a college environment,” said Lottie. “Campus police are part of the learning environment, and I enjoy working with college-age people. These are individuals working to better themselves; they made the choice to be here, and are looking to stay. They have something to gain by following the rules,” he explained.

In 1999, the 29 SUNY campuses changed their Campus Public Safety departments to University Police. Officers gained an increase in police powers, and university police officers were required have a minimum of 64 college credits (some of which may be waived for military service).

“The majority of my officers and command staff have Bachelor’s degrees and many have Master’s degrees,” said Lottie. “As a result, our University Police Department better reflects the community we serve. We also put a strong emphasis on training. All off our officers receive extensive training beyond the basic Police Academy. Some of the most contemporary training our department members have completed recently includes Fair and Impartial Policing and de-escalation training. These represent nationally recognized best practices for police,” he explained.

Lottie oversees 18 sworn officers and four dispatchers, as well as individuals in the Parking Office, Emergency Management, and the Campus Lock Shop.

His proudest moment came last spring when the University Police were given the Ally Award by the Black Onyx group at SUNY Plattsburgh for “being a voice for the underrepresented.” In addition, the RADIUS group, another campus organization, also recognized them for their “support for inclusion and celebrations of diversity.”

“The biggest satisfaction of this job is any time we can solve a crime—recover a victim’s property or give them personal closure,” said Chief Ken Parkinson, a 24-year veteran of the Plattsburgh City Police Department. Appointed as chief in March 2017 after the retirement of Chief Desmond Racicot, Parkinson graduated from AuSable Valley Central School, and earned a degree in Data Processing from Clinton Community College. Upon graduation, he worked in construction for five years, and then decided to take the entrance exam for the police force. “I wanted a job where I could help people and be part of the change,” said Parkinson. “I would like to continue to do this as long as I feel I am making a difference. It is gratifying to have the support of the city and its people.”

After working as a patrol officer for 10 years, Parkinson was promoted to sergeant, a position he held for 13 years, and later to lieutenant. As chief, he supervises 46 sworn officers and seven civilians. He credits Heather Silver, assistant to the chief, with helping to smooth his transition.

His day is fast paced, and never routine. He begins with emails and messages and responds to whatever comes up. His day, however, doesn’t end at 5 p.m. “I try to be proactive and am never too far from the phone. If a problem arises, I’d like to address things right away,” said Parkinson.

Inheriting a tight budget, Parkinson has been juggling resources. He hopes to hire more officers through the Community Oriented Policing Services (COPS) program, a component of the U.S. Department of Justice that aims to build trust and mutual respect between police and communities. When police and communities collaborate, they can more effectively address crime challenges and underlying issues, and change negative behavioral patterns. COPS offers information and grants to state, local, territorial, and tribal law enforcement agencies across the United States.

Parkinson has started a local city Narcotics Unit to address the growing opioid epidemic. His other goals are to develop officers as future leaders, recruit qualified candidates, and be more involved in the community. “I encourage my officers to get out and make personal connections. Walk around and engage with the public,” said Parkinson.

Along with other area law enforcement professionals, Parkinson shares a concern about public perception of those whose job it is to keep our community safe. His advice to the public? “Treat police like we’re human beings. We’re not infallible, but we’re trying to make the world a better place.”