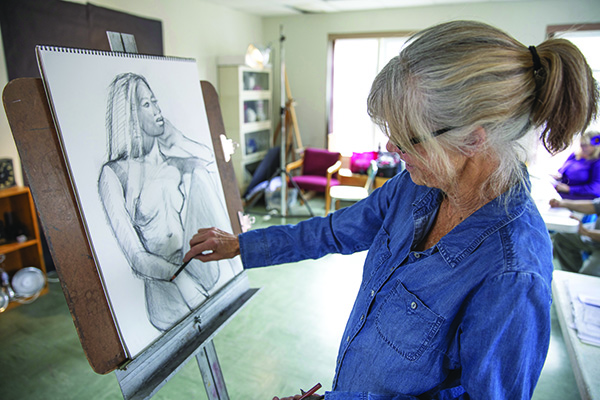 Under the leadership of Executive Director Joshua Kretser, the mission of unit- ing the arts with our community and visitors to the Adirondack Coast is in full swing. Arts and cultural events, presented by the Strand Center for the Arts (SCA), are bringing people to downtown Plattsburgh. With a 15,000-square foot arts center and a nearly 1,000 seat fully restored performing arts theatre, the SCA attracts residents and visitors to comedy shows, theatrical performances, dance exhibitions, film festivals and screenings, cultural exhibitions, music concerts, community events, arts classes, and gallery exhibitions. Prior to and/or following theatre performances and events and classes, visitors patronize downtown shops and restaurants. In addition, the SCA continues to collaborate with community partners Fledging Crow Farm and the Wagar Brothers Band to create a new initiative, Downtown Rising. Taking place from 9:00 am – 2:00 pm every Saturday in June, July and August, Downtown Rising unites community members and visitors to hear live music on the front lawn, purchase fresh produce from local and regional farmers and meet artisans selling their goods.

Artistic Programming Director Mallory Valk is currently developing the Fall/Winter 2017-2018 class schedule with artist instructors. “Together, we work to create comprehensive arts education programming to serve our community as well as link education with entertainment,” she said.

The Strand Center Clay Studio is one of the largest studios of its kind in the northeast. It offers weekly classes to teach children and adults the art of working with clay, exploring working on the wheel, hand building techniques as well as sculpture. Members can also enjoy Mud and Merlot classes where adult members enjoy a glass of wine while creatively getting their hands dirty. Open studio membership hours are available at least five days each week for experienced potters who may not have the necessary infrastructure at home, but have the fundamental skills needed to work in the studio without instruction.

With a $495,000 DRI grant, construction will begin on the Strand Center Innovation Studio (SCIS). This space will be engineered as a dance studio, but its possible uses to the community extend beyond. The grant will not only fund the construction of the SCIS, it will also include financing for state-of-the-art computers outfitted with creative design software, flexible workstations, sewing machines, smart board and other teleconferencing technologies, and seating for performances and recitals. The space will comply with modern ADA (Americans with Disabilities Act) guidelines making the SCIS accessible and inclusive for everyone living in and visiting the Plattsburgh community. Once completed, the SCIS will be a flexible space with all of its equipment on wheels to make it easier to convert to different uses on any given day.

When it opens in July 2017, instructors in the Strand Center Framing Studio will be teaching framing skills including mat cutting, frame joining, and creating frames from found items. For those who may not want to learn how to frame paintings and photographs them- selves, framing technicians will take care of everything at prices comparable to the big arts and crafts box stores.

According to Kretser, “The DRI grant award will be used to purchase necessary stage lighting and sound equipment to reinforce the state-of-the-art technology which was installed in the fall of 2015. In addition, a portion of the grant award will be used to reinforce theatre marketing efforts to promote our first full season of Strand Center Presents performances and events for 2017-2018. In addition, through a $100,000 loan, obtained through the Clinton County Tobacco Settlement fund, the SCA will be able to pay the necessary deposits for this season’s shows. We plan to present at least two live performances each month with a number of film screenings and community rentals added to round out the schedule. We will continue to offer the broadest selection of programming, with something for everyone to enjoy. Having a full and complete season of program- ming will enable us to sell season subscriptions. We can then use these early revenues to begin booking the following season’s programming in advance. Lastly, we will look to add live simulcast performances where we will live stream music concerts, dance exhibitions, comedy shows, and other performances taking place in venues across the nation and across the world on the big screen in the theatre.”

Some Popular Performances to Date

Although theatregoers have filled the audience of the Strand Center Theatre for a number of performances and events held throughout the last year, the first sold-out performance was for Heart’s Delight: The Story of William H. Miner, a 90-minute documentary by Paul Frederick on the life and local contributions made by William H. Miner. The Second City comedy troop and Montreal Burlesque Productions packed the house as did the regional band Lucid with its farewell performance. Other notable performances included Mark Nizer’s 4D juggling performance and Nelson Illusions, which left families spell- bound. Adirondack Regional Theatre also presented their production of Mel Brook’s full-length musical, The Producers, to rave reviews.

Since many North Country residents have fond memories of the Strand Center Theatre when it was a movie house, the tradition of showing films in the space continues. Through grant awards, the SCA has been able to purchase and install state-of-the-art cinema equipment in the theatre including a movie screen that fills the stage opening, Dolby Surround Sound, and an HD digital movie house projector. “Thanks to Jonathan Ortloff, Alan Tetreault, David Cohen, and many dedicated volunteers, we have one of sixteen original complete Wurlitzer Theatre Pipe Organs left in the world. We plan to continue to host silent movie events complete with live theatre organ accompaniment by some of the world’s most renowned organists,” confirmed Kretser.

Moving into the Future

According to Development Director Karen Dispo De Boos, “2017 is a cornerstone for the growth of the SCA. The Downtown Revitalization Initiative funding is transformational for the entire organization. On a deeper level, the growth of this comprehensive arts and performing center will spur economic development and establish a space for our community to foster creativity and imagination.”

“We plan to continue to host silent movie events complete with live theatre organ accompaniment by some of the world’s most renowned organists,” confirmed Kretser.

“Navigating the waters of any non-profit organization can be a bit of a bumpy ride; however, we are fortunate to have the opportunity to collaborate with, and learn from, our amazing community partners including SUNY Plattsburgh, the City of Plattsburgh, the Beekmantown School District, and many others who work with us on initiatives which have, and will continue to produce, a positive and lasting impact on our region,” explained Kretser. “The SCA is always in need of funds to assist in fulfilling our mission of uniting the arts with our community. State and federal grant funding opportunities continue to decrease as our need to expand our services increases. Fortunately, the Strand Center Theatre has been completely restored; however, now our focus shifts to preserving the Strand Center for the Arts building.”

As a registered 501C3 non-profit organization, all business sponsorships, individual memberships, and donations to the SCA are tax deductible. Those wishing to support it, can donate on its website or by visiting the Strand Center for the Arts on Brinkerhoff Street.