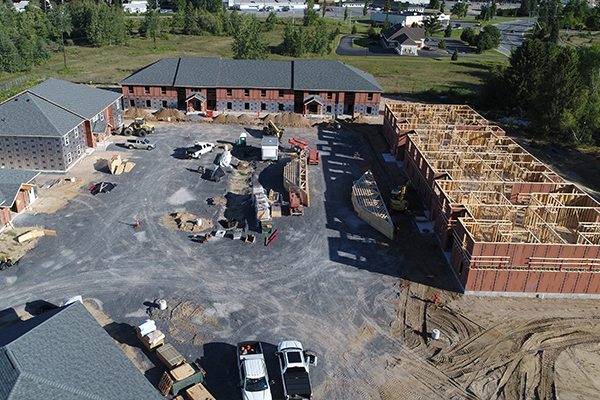 OVER FIVE YEARS IN THE MAKING, THE NEW AFFORDABLE HOUSING DEVELOPMENT called Atlas Heights on Montana Drive off of New York Road in Plattsburgh is set to open in July. This new complex will include three apartment buildings, a community building, a tenant storage area and a playground. Forty housing units — offering a mixture of one-, two- and three-bedroom apartments — will be managed by the Plattsburgh Housing Authority (PHA), helping to expand its ability to provide affordable housing for the community.

Grants PHA received allowed it to establish a non-profit affiliate called Plattsburgh Community Housing so that it could work outside of the city limits. Mark Hamilton, the executive director of PHA, considered the entire process a valuable learning experience, one that he can talk about all day.

Through various programs that distribute over 200 vouchers throughout the North Country to people in need, the PHA has watched as the affordable housing stock has slowly deteriorate each year. Many of the places people can afford are not maintained and there are burgeoning health and safety issues. Atlas Heights will not only add more affordable housing but it will be newly constructed, upgrading the stock while also expanding the market.

As the adage says, “Location, location, location” is what it’s all about and Atlas Heights is being built in an ideal location. “It is important that housing is located in an area where, if folks have transportation issues, they can still have access to everything,” Hamilton explained. Atlas is close to a grocery store, a bank, a pharmacy, and other retail establishments, along with daycare and schools.

Hamilton worked with county leaders to assure a bus route travels right by the complex, making it easy for future residents to move around the area. Many manufacturing and transportation companies are also located close by, providing job opportunities as well. With Champlain Valley NAMI and MHAB Life Skills’ campus located just down the road, residents will also be close to mental health and rehabilitation services.

Surprisingly, the project is ahead of schedule. Since it is affordable housing, construction was deemed essential during the pandemic shutdown. There were some minor setbacks due to shortages in the building materials supply chain but solutions were found so construction did not have to be delayed.

According to Hamilton, Bruce Levine and the 3D Development Group has been top notch. They have worked all over New York State and know enough about the inner workings of state funded projects to make overseeing this project less time consuming for him. He has been able to rely on their knowledge and expertise so that he could focus more on his work with PHA and its COVID-19 response.

To complete this project, PHA “packaged a number of funding sources together to make it feasible,” Hamilton explained. Tax credits through New York State Housing Finance Agency and the Housing Trust Fund provided part of the funding. PHA also received a NYSERDA grant based on the new construction meeting certain environmental standards, which include regulations on insulation and building materials. Those same standards allowed the project to apply for LEED certification through the USGBC, which will be awarded once the construction is completed. Recently PHA was awarded an Affordable Housing Program grant through the Federal Home Loan Bank of New York.

When the PHA planners learned there was no permanent housing available for survivors of domestic violence in our tri-county area, they knew they needed take action. It was a “light bulb moment for us,” Hamilton noted. “Our purpose is to meet housing needs that are not currently being met. Providing 14 units of permanent housing for domestic violence survivors is a ‘perfect marriage’ for our goals. We are happy we can bring something new to the table.” Atlas Heights will partner with STOP Domestic Now through Behavioral Health Services North (BHSN) to identify residents for the units.

BHSN received an Empire State Supportive Housing initiative (ESSHI) grant to provide funding for families to cover rent, security deposits, furniture, and moving costs, as well as a part-time case manager to work on site. Domestic violence and child abuse cases have increased during the pandemic, making it “a serendipitous time” for this housing initiative.

PHA will follow an affordable fair housing marketing plan that has been approved by New York State. Initially the agency will reach out to community organizations such as JCEO, North Country Center for Independence and the United Way of the Adirondacks to let them know housing will be available for their clients. Advertising will also be done in newspapers and other publications to spread the word. Applications will be accepted until the end of June when qualified applicants will be entered into a lottery pool to ensure equal access to the housing units.

To qualify, residents must have an income that is at 60% or lower than the median income of the area. According to the U.S. Department of Housing and Urban Development, that income for Clinton County in fiscal year 2019 was $68,300. Most residents will be working families — what the United Way of the Adirondacks calls Asset Limited, Income Constrained, Employed (ALICE). These are families that are one economic setback away from homelessness or unemployment — what used to be called the working poor. Rents will be set by the state, and will be at affordable rates rather than market rates.

Atlas Heights is the latest step in the redevelopment of the former Plattsburgh Air Force Base. Its opening, scheduled for July, will create a sense of community and will help to make the area more inviting not only for locals, but for those looking to make Plattsburgh their new home.