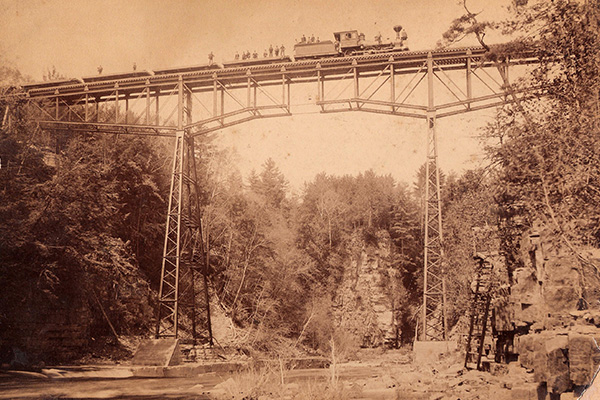 On a sparkling October day in 1765, William Gilliland, an Irish immigrant who had settled on the Bouquet River, set off in his flat-bottomed boat to explore northward along the west shore of Lake Champlain. Discovering the sandy, twisting mouth of a river, he followed it to still water below some rapids, and could see the lower end of a narrow gorge. “It is a most admirable sight, appearing on each side like a regular built wall…their height … is from 40 to 100 feet in different places,” he wrote later in his journal. “We saw about half a mile of it, and by its appearance where we stopped, it may continue many miles further.” One can imagine Gilliland paddling home to tell his neighbors, and the forays they planned to explore this wonder of geology amid the primeval forest.

More than a century later, after the end of the Civil War, a group of Philadelphia investors purchased the site now known as Ausable Chasm and created a tourist attraction. Ulysses S. Grant, credited with leading the Union Army to victory over the Confederate States, was president of the United States at the time. The telephone, phonograph, and light bulb had not yet been invented. The original copper-riveted blue jeans created and sold by Levi Strauss in San Francisco to gold seekers were three years in the future. Queen Victoria of England was halfway through her 64-year reign.

So many changes and yet, 150 years later the Chasm is still in business.

GETTING TO THE CHASM: THE EARLY DAYS
The first visitors arrived by horse and buggy or stagecoach and bought tickets from the octagon-shaped pagoda Visitor Center. The Chasm wasn’t easy to tour in those days and so in 1873, the investors cleared the Inner Sanctum Trail, and instituted a boat ride from Table Rock to the Chasm’s end. Photographs by Seneca Ray Stoddard (see sidebar) astounded the public and increased curiosity and visitors to the area.

Two decades later, the Peanut Railroad, a local initiative to link tourist and commercial interests to Vermont, New York City and Quebec used full-scale tracks and a cantilever bridge to span the Chasm. Meant for freight as well as passengers, the Peanut opened to great fanfare at sixteen trains daily for twenty-five cents per roundtrip. Visitors could travel by boat to Port Henry, and board the train to the Chasm. This method of travel continued until 1924, when the automobile era was ushered in. Today little else but the depot now remains.

FIRST A ROADSIDE ATTRACTION, THEN ITS OWN DESTINATION
With the improvement of paved roads and the proliferation of automobiles, the Chasm’s location on Route 9, the main road between New York City and Montreal, increased its popularity as a roadside attraction. The 1950s and ‘60s proved to be its heyday until Interstate I-87 opened in 1967. Since families no longer drove by the Chasm, management had to retool to make it a destination of its own.

To that end, rafting, tubing, rappelling, and more trails were added as well as a Lantern Tour and campgrounds. Hiking and the classic boat ride were still available.

THE CHASM TODAY: INTERVIEW WITH TIM BRESETT, GENERAL MANAGER
It is obvious that Bresett, GM since 2002, loves the Chasm and his job. Under his stewardship, the attraction has grown by 200%. He works with 20 year-round employees, including a historian, and 80-110 seasonal employees- -young adults who work the busy summer season as river and adventure guides, maintenance, front desk, retail, bus drivers, food service, and more.

What is your favorite activity at the Chasm?
“I’m a hiker so I have to say hiking the trails, but I really do enjoy all the activities. My favorite public offering is our Premium Package. Guests can explore the trails, conquer their fear of heights on the Adventure Trail via ferrata, and enjoy a raft float tour and/or tubing on the river. It is the creation that I am most proud of and a unique experience you can’t find anywhere else.

How did the COVID-19 pandemic interfere with plans for celebrating the Chasm’s 150th year?
While some activities, such as hiking, were still available for the summer season, all our plans for our 150th anniversary celebration had to be postponed. We are planning on celebrating it in 2021, starting with a media event before the summer season followed by several special presentations and offerings throughout the year. Banners and uniform buttons have already been obtained to help spread the word of this notable milestone.

What are some tips for running a tourist destination like Ausable Chasm?
Be enthusiastic. Above all, it is imperative that we have energy and enjoy what we do. A staff that enjoys their work environment will provide the best experiences. Also, it is crucial to know what our guests want and what their expectations are. Word of mouth is our #1 form of advertising, so we really need to make sure all guests leave here feeling amazed and that their time with us was well spent.

Biggest challenge? Biggest reward?
While COVID-19 has been difficult, the biggest challenge so far has been recovering from Tropical Storm Irene in 2010. We lost so much infrastructure (bridges, stairs, railings, etc.) that it was difficult to comprehend how we would ever get back. Even the river changed dramatically, altering our river tours to this day.

The biggest reward has not only been increasing the number of guests, but doing so where everyone has been amazed by the experience. I take great pride on providing exceptional experiences in a safe and fun manner. Most guest feedback has been off the charts positive and is a result of the hard work and passion the staff puts forth.

What is the secret to keeping a business of this longevity running?
Providing an exceptional experience so that when our guests return home, they tell everyone they know. If we do this the rest will fall into place nicely.