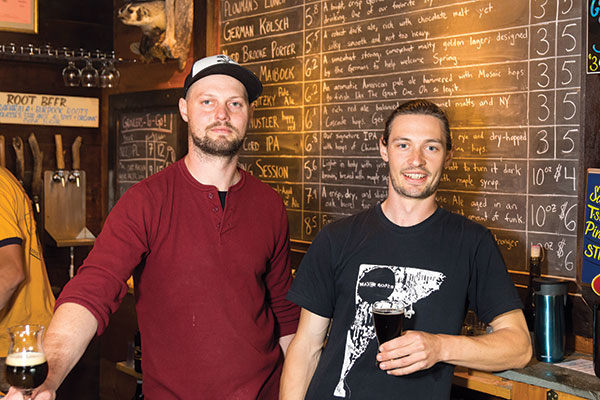 In September of 2014 Dan and Dylan Bager opened the Ausable Brewing Company on Mace Chasm Road near Keesville, NY. Their enterprise began with a decrepit barn, a small beer brewing rig, and a desire to make good beer in a socially and environmentally sustainable way. The popularity of their products and the relaxed, outdoorsy atmosphere of their brewery have attracted a loyal, growing following.

The brothers have been brewing beer for about 10 years. During that time, Dylan studied in the Master Brewers Program at the University of California at Davis. Dylan worked at Mammoth Brewing in California and Long Trail Brewing in Vermont before coming back to team up with Dan on their own brewery. “When Dylan returned, we started brewing together again. We’ve been using the same gear and develop- ing our recipes since then,” said Dan. “It’s a small setup but it’s state of the art. We’ve been using it for so long that our recipes and processes are really dialed in.”
The beer recipes use local ingredients whenever they’re available. The Badgers began growing hops onsite three years ago and they’ve increased hop production through a partnership with Mace Chasm Farm. New fruit trees have been planted to supply black currants, elderberries, cranberries, and cherries. They use these fruits in new beer recipes, root beers and barley wines, with innovative and classic styles.

The growing demand for their beers has outpaced their production capability. “We are so happy with the local turnout. The community has really accepted us,” said Dylan. “We have the best customers, but we can’t make enough beer.” This growing demand has prompted plans for a major expansion to the original barn and doubling the size of the brewing rig.

The 100-year-old timber-frame barn that currently houses the brewery and tasting room needed extensive overhauling before opening for business in 2014. The Badgers replaced the roof and rotted walls and beams, and installed new electrical wiring and plumbing. The new expansion will double the size of the barn with a newly constructed addition. A larger brewing rig with twice the capacity of their current hardware will fill the new space. “We need more beer for this place before we think about wholesaling to restaurants or bottling,” said Dylan. “We’re not in a rush to grow too quickly, but we need more space.”

Expanding at a measured pace has allowed for reinvestment in innovative brewing solutions. In 2015, the Badgers designed and installed a solar water heater on the outside of the barn. The sun heats the water in an array of pipes and tubes, and this heated water is used during the brewing process. The final temperatures are reached with care- fully controlled heating systems within the barn. Minimizing fuel use for water heating appealed to the Badgers economically and as a way to support environmental sustainability.

In 2014, cars often parked for a half mile or more along Mace Chasm Road, and Dan and Dylan realized that a parking area was needed. “We approached the town officials with our parking plan, and they were all for it,” explained Dylan. “They have been very supportive and told us to get the parking lot done when we can.” Now, a large gravel parking area keeps Mace Chasm Road clear of parallel-parked vehicles.

The outdoor venue at the brewery, undeniably one of its most appealing features, has evolved over the last few years. Two years ago, the Badgers erected a towering pavilion to replace the picnic tables and fire pits that once dotted the yard. While some outdoor seating and campfires are still available, the pavilion provides shelter during inclement weather, shade from the summer sun, and a rustic special-events venue. During the winter, canvas walls are unrolled, enclosing the structure and insulating the interior against the cold. Gas heaters and good cheer have kept patrons warm until late December, when the brewery closes until spring. A five-tap system in the pavilion is new this year.

Taco Thursdays remain a popular weekly special and a hit with customers. The Mace Chasm Farm taco truck continues serving up tacos made with locally grown meats and produce. Joining them this year on Fridays and Saturdays are Northern Feast Catering, specializing in sweet and savory crepes; and Dubb’s BBQ, offering homemade sauces, farm-fresh sides, and fall-off-the-bone chicken, pork, and beef. Ryan Weidenbach, the owner of Dubb’s, designed and helped construct the new pavilion.

On weekend evenings, families and friends populate the grounds around the brewery. Kids run in the fields and play homemade lawn games. String and fiddle bands take to the stage in the pavilion and churn out original and old favorite tunes. Tasty beers are sipped and local foods enjoyed. And, if you’re lucky, the deer and wild turkeys will make a sunset appearance along the wood line of the field across the road.