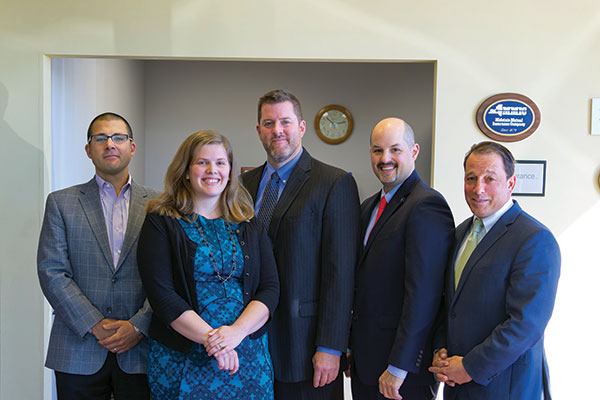 I think it’s fair to say that those who successfully manage wealth for a living also do a decent job of managing their own happiness. At least that’s my take after recently spending time with the folks
at Community Bank and Community Bank Wealth Management in Plattsburgh.

Steve McFadden just celebrated his first year with the Wealth Management office at 524 Route 3 in Plattsburgh. He made the leap after 15 years as a one-man show financial consultant and he couldn’t say enough positive things about his transition to the wealth management group. He said of the local team and Community Bank’s corporate leadership, “They just bent over backwards to make sure I had whatever I needed. And it had warmth and welcome to it, and ‘glad-to-have-you-here’ to it.”

There was astonishment in his voice as he contrasted the typical corporate dog-eat-dog world of financial consulting to his experience at Community Bank Wealth Management, where every new employee he meets is nicer and more accommodating than the last. “I’m wait- ing for the jerk to come around the corner. I just cannot believe I haven’t bumped into one yet,” he exclaimed. I asked if he was the jerk and he replied, “Geez, I hope not?!”

As regional sales coordinator, McFadden heads up a team of highly effective financial consultants and wealth-management client associates from Fort Covington to Plattsburgh, including the entire Adirondack region all the way south past Ticonderoga. Financial Consultant Tim Forman efficiently covers most of the remote branches distant from the City of Plattsburgh.

If you’re having a bad day, just stop in the office. Even if they don’t take care of your money, Financial Consultant Andy Lomanto and Client Associate Hannah Provost will be happy to see you. It will be 10 a.m., Lomanto will be on his third cup of coffee and he will offer you a piece of homemade pumpkin bread. Perfectly put together, Provost will greet you at the door like an old friend, hug you, and ask with genuine concern how you are.

This type of treatment isn’t isolated to the wealth management office. Friendliness is a pervasive quality across the board at Community Bank. At the brand new main branch down the road, referred to as the “Taj Mahal” by McFadden, James Snook manages a tight ship with a wide grin. I recently witnessed a frail, elderly woman question, “Am I at the right place?” as Snook held the door open for her. “Yes, ma’am,” he said. “Welcome to the bank!” I had visions of Daddy Warbucks as he gladly ushered half a dozen other customers through the doors.

With more than 700 banking customers going through those doors daily, it’s not surprising that Snook’s branch is the number one branch in the company. “It’s about the customers. It makes us happy to make them happy. Without those people walking through our doors, we wouldn’t be here,” acknowledged Snook. Describing the beautiful new lobby like a nice hotel, he recalled a prescient moment a few years prior when the bank acquired a number of branches in a Citizens Bank divestiture. The chief banking officer picked Snook out of the crowd and prophesied that he would one day be looking out on a turret over the Town of Plattsburgh. Noting the coincidental spires atop the new building, and, like McFadden, praising the Community Bank corporate leadership, Snook noted, “They meant what they said and they did it.”

McFadden recognizes Backus as a whale in the retail banking world and that Community Bank’s bread and butter is loans and deposits, not wealth management. But, he noted, “It’s my understanding that Wealth Management will grow exponentially in as good as the Wealth Management Team is at providing more and more value to the retail branches, commercial lenders, and our customers within the bank and throughout our communities. My practice has always been to make it easy for people to talk to me by conducting myself in a manner that reflects confidence, trust, and respect. This model is consistent throughout the entire organization.”

The Community Bank Wealth Management office will soon go through exterior renova- tions with spires and all to match Snook’s main branch down the road. It’s a deliberate plan and yet another investment Community Bank has made in Plattsburgh to keep pace with the significant growth the company has seen here over the last decade.

Community Bank’s footprint across upstate New York has ben making tracks in the rural
marketplace since 1886. This year marks 150 years for the company, which originally got its
start as St. Lawrence National Bank. Small local branches shine at tending to the needs of rural clients throughout New York and Pennsylvania, but Tryniski now sees Plattsburgh as a growing center of economic vitality that his company is well equipped to serve, especially with committed, experienced professionals like McFadden, Backus, and Snook on board.