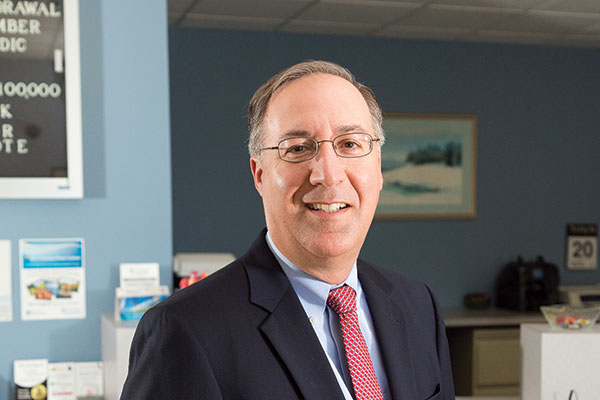 When you survey the banking landscape in and around Plattsburgh, it’s a competitive place, given its size and the population base it serves. Steven Cacchio, who came to the North Country just over a year ago to become president and CEO of 107-year-old Champlain National Bank, knows a little bit about competition and pace in the banking industry. He spent the majority of his career in the Syracuse market, starting as a bank regulator with the Syracuse office of the Comptroller of the Currency, which regulates and supervises national banks.

Cacchio graduated from the University of Hartford and then spent a few years with JP Morgan in New York City. Later he earned a M.S. in accounting from Syracuse University. After graduating, he spent six years as a bank examiner.

That work in banking regulation, he said, “helped me tremendously in my career. It’s a great learning experience. As regulator, you spend time in some of the smallest institutions, right up to the largest, so you’re able to get a first-hand look at all the different aspects of bank- ing, whether it’s credit, or asset-liability management, or overall management.”

Although he enjoyed the experience, Cacchio eventually moved “back” into banking, in part because of the travel that was involved at a time when he had two young sons. “I was going all over Western, Central and Northern New York depending on what the needs were.”

“I also really enjoyed the banking side,” he said. “I liked talking with bankers, seeing what was going on, and what their issues were.” Cacchio pointed out that while regulation is an important aspect of banking, it involves reviewing, versus actually developing or doing. “I liked the idea of driving business and customer interaction.”

After leaving the Comptroller of the Currency, he spent over 13 years at Alliance Bank in Syracuse, ultimately becoming Senior Vice President of all Retail Operations, until 2013, when Alliance was acquired by a larger regional bank. Although he stayed on for several months into the transition, Cacchio said it really got him looking at opportunities, and at what he would like to do. He became COO of the $800 million Savings Bank of Danbury, Connecticut, but when the opportunity to join Champlain National Bank came up two years later, Cacchio says he looked at the bank, met with the board, and it just felt right. “It really made sense for me to make this move. It’s a great organization, and I was fortunate to be selected for this role.”

Cacchio said it’s fair to say he is attracted to smaller organizations rather than larger regional banks, and in a competitive industry, smaller size can give an edge. One benefit is that Champlain National Bank doesn’t have to worry about quarterly investor calls. “When you’re part of an organization that’s publicly traded, it’s all about your stock price,” said Cacchio. “We [at Champlain National Bank] don’t have that shorter term vision; we can have a long-term strategy.”

The real advantage, he pointed out, comes from the bank’s place in the community. “I think what sets us apart, is that this—the North Country, Plattsburgh, the Adirondacks, the communities our branches are in—is really our only focus, versus the competition, for whom this is just a very small piece of their entire network. We’re here, we can be much more flexible, understand [our customers’] needs, and respond better. That’s really how we compete, and I think, successfully.”

For example, a visit to the bank’s website lets customers know that Champlain National Bank doesn’t believe in call centers. The bank wants its customers to call the closest branch, where the same person the customer sees when they walk into the branch is going to be the one who takes their phone calls. In contrast to someone at a call center who would be looking up a customer profile on a computer for the first time, bankers at the local branches know their customers and their accounts, which puts them in a better position to help. “They know who they’re talking to, and what their needs are,” said Cacchio, “versus going to a centralized call center that could be located anywhere.”

“Our commercial lenders are here,” said Cacchio, indicating the offices behind the teller line at the Champlain National Bank branch on the corner of Cornelia and Margaret Streets in downtown Plattsburgh. Similarly, the people who make decisions about the bank’s mortgages are located at the branch on Route 3. “The people doing the underwriting of our credits are here,” he said. “A lot of the time when you go to a larger bank, someone will take your application, but then it’s reviewed and a decision s made about it someplace else, where the person isn’t as familiar with the market. It helps being so focused on one area—we can be a little more flexible, more creative.”

“Our ownership structure and board—it makes a difference,” added Cacchio. “Our board is…all local business people who are committed to and concerned about [the community]. And that’s why they’re so very supportive of this organization. It helps us be who we are. I think that’s an important distinction in comparison to a bigger organization.”

For Champlain National Bank, the answer to “who we are” is a strong, independent community bank. “The way I define community banking is helping and supporting the individuals and organizations in the communities we interact with,” said Cacchio. “I think people underestimate what, overall, the American banking system does, but also what community banks do for the communities in which they serve. They really do promote economic growth and help people— sometimes it’s buying their first home, or the car they need to get back and forth from work.”

Cacchio pointed out that the bank also helps organizations grow. “At last year’s North Country Chamber of Commerce’s Annual Dinner, we even had a company thank us and our Senior Lender Lisa Roberts for what [we] did to help them get started,” Cacchio said. “That makes us all feel very good.”

Promoting local economic growth also plays a significant role in directing where the bank’s charitable dollars go. Because Champlain National Bank is based here, all of its contribution dollars stay here. This year the bank made contributions to organizations like the Chamber’s Plattsburgh International Airport Take Off Fund, to help position the airport to attract bigger carriers, and to two area hospitals—huge economic drivers for the region— that are undergoing expansion.

When Cacchio started last August, he was given a charge by Chairman of the Board Peter Paine Jr. to keep Champlain National a strong, independent bank. “They are (Paine and other members of the board) committed to this organization being here in the North Country another 107 years, and to really making a difference,” said Cacchio. “We have a long-term strategy.”

Part of that strategy for his first year was to bring to Champlain National Bank some of the ideas and technology that Cacchio knew worked well in banks like the Savings Bank of Danbury and Alliance. “Even though we are a smaller community bank, a lot of the services we offer allow us to compete with larger banks, such as mobile banking and mobile check deposit,” said Cacchio. “We’re a partner with the Allpoint ATM network, which allows our customers access to 55,000 ATMs to get cash.” The Allpoint network makes Champlain National’s ATM network twice that of the nation’s largest bank. And with the number of ATMs the network has in Canada, the bank’s customers have surcharge-free access to their money while they’re travelling north of the border. “It’s really been well-received by our customers because they’re not limited as to where they can get their cash,” said Cacchio. “You can bank anywhere. Or you can travel, relocate, and still maintain your bank accounts with us.”

Looking ahead, Cacchio said, “The bank is very strong when you look at all metrics, whether it’s capital, liquidity, asset quality. It’s been around 107 years. Do we have to change just to keep changing with the times, the industry? Absolutely. Are we always looking at what’s next, and what we need to do, and where there are opportunities? Yes. Are there certain markets that could be an opportunity for us? I think the answer to that is yes, whether it’s technology or the way we deliver our products and services, our branch network, our people.”

For Cacchio it comes back to one thing. “It’s creating that environment in which the individuals and organizations in those communities can thrive. That really is at the heart of community banking.”

BANKING ON HISTORY
Champlain National Bank’s history is very intertwined with industry in the North Country and getting businesses o the ground, and it informs how the bank operates today.

Banking was initially a secondary business for founder A.G. Paine. In 1885, he purchased a paper mill in Willsboro, but in 1923, when he realized that the workers who ran the mill needed a community bank, he established one for them. That first bank was there to support the mill and the people who worked there.

Willsboro produced a tremendous amount of paper in the 1920s and 1930s, drawing many to the Willsboro/Essex area. Eventually, the paper mill closed down, but the bank remained. Today, the original bank building has become the Willsboro Heritage Center Museum. The vault area in the building still exists, and visitors can see old Bank documents there, as well as at Champlain National Bank’s Willsboro and Westport branches, where old banking memorabilia and equipment are on display.

Among the documents Champlain National Bank retains are letters A.G. Paine wrote during the Great Depression and World Wars I and II. During those years, Paine made some decisions that were not necessarily pro table to him personally, but which kept the bank and the town a oat during difficult times. He invested his own money so that towns- people wouldn’t lose their capital and so that the bank could remain open. In his letters, Paine outlined how the investment wouldn’t profit him, but that he felt it was the right thing to do, because it kept that town going despite hard economic times.

“There’s a tremendous amount of history with the bank,” said Cacchio. “That still is a driving force for all we do. We re- main very focused on remaining a strong independent bank and being able to really support this community and that’s what we do day in and day out.”