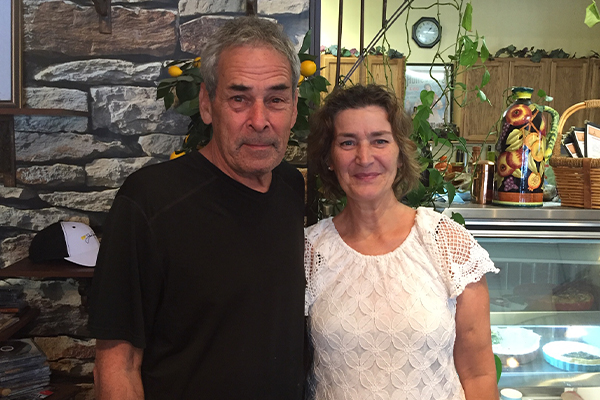 For the next stop on my lunch tour, I chose French cuisine. No chance for an outside dejeuner in Paris, but Quiche et Crepe in Boynton Square Plaza offered an interesting alternative.

Tucked away in the back corner of the small strip mall at the intersection of Beekman Street and Boynton Avenue in Plattsburgh, is the locally owned French style bistro operated by Roger and Evelyne Metzger. Roger grew up in Iowa and became a sales rep traveling across Europe. Evelyne was born and raised in Rouen in the northern part of France. They met, married and raised their family in her hometown for 16 years before deciding to resettle near Roger’s family. After several years in Iowa their desire to be closer to French culture brought them to Montreal and eventually to Plattsburgh.

During their time in France Evelyne taught school and Roger spent time in restaurants observing how their food was prepared and teaching himself to cook. Today he is a master chef who prides himself on his original recipes.

To experience the cuisine for ourselves, my friend Adele and I made a date for lunch at Quiche et Crepe. It was a lovely afternoon and we chose to sit outside on their small patio. Once we were settled, Evelyne offered the menu and took our drink orders. So many choices. How to decide? The soup that day was roasted red pepper. Interesting!

Next, we focused on the quiche selections and what a selection it was — Quiche Lorraine; bacon broccoli; asparagus mushroom; and spinach, tomato, garlic with feta. On Thursdays Roger makes his famous seafood quiche.

The savory crepe selections were intriguing. Adele chose the smoked salmon BLT crepe with dill sauce. I opted for the chicken salad crepe with avocado, pecans, cranberries, and spring mix. They were large and delicious. Other options we were eager to try – and will on our next visit to QetC — were the Seafood Crepes with scallops, shrimp and crab meat and the Ham, Broccoli and Mushroom crepes.

One popular item on the menu was a dish I did not think of as French – lasagna. When I questioned Roger, he pointed out that his lasagna is unique. “It is made with bechamel sauce rather than the traditional tomato-based sauce and people love it,” he said. It was clear he is proud of what he calls his “signature dish.” “I would be happy to participate in a lasagna cook off with any restaurant in the area. I know I’d win,” he commented.

And then it was time for dessert. Again, so many options. Sweet crepes filled with strawberries or bananas, chocolate mousse crepes, banana fudge walnut ice cream crepes, and a special crepe that is very popular in fall and winter – hot apple crepes topped with walnuts and maple syrup. Roger proudly recalled a visit from a Lake Placid restaurateur who sampled his crepes and deemed them “Excellent.”

In addition to the crepes, Evelyne offered a dessert tray featuring a flan made of poached pears and almonds in an almond liqueur. While Adele and I seldom have dessert at lunch, we had to try the flan. It was delicious! It will be my must-have dessert when I visit QetC again.

Roger and Evelyne joined us as we finished our deserts and I asked how they had survived the pandemic. “I got on the phone,” Roger said. “We have been in business long enough that we have a strong customer base. I would call them up, tell them what I was making each day and take their orders. Then I would put the food out front on a table and they would come pick it up. I guess that’s what people call curbside.”

I asked how business was now that the pandemic has abated. Evelyne was enthusiastic about their numbers. “Spring and summer in both 2021 and 2022 have been very strong and our catering engagements are growing,” she said. Full pans of Roger’s specialties are available for order and pick up. I hear his eggplant parm is terrific.

Quiche et Crepe is open Monday through Saturday for breakfast and lunch. No room here to tell you about their very French options to start your day, but rest assured they bear no resemblance to traditional American eggs and meat breakfasts.

To find the right words to describe our dining experience at Quiche et Crepe I again reached out to the internet to see what others thought. My favorite comment was “Five Stars All-Around!” I agree!