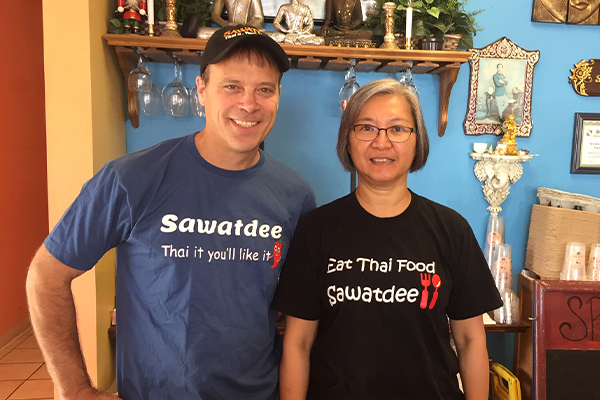 For a city of its size Plattsburgh has an impressive variety of small ethnic restaurants. Arnie’s and Mickey’s for Italian food, Aleka’s for Greek, The Pepper and Lomeli’s for Southwestern/Mexican, Quiche et Crepe for French, Yama Sushi and Koto for Japanese, Island Vybz for Jamaican, Hong Kong Jade and No. 1 for Chinese, Sawatdee for Thai, the newly opened Indian Grill, and so many more.

As summer faded and fall began to put its stamp on the North Country, I decided to celebrate the transition by having lunch with friends at restaurants they enjoy, but I have not experienced. You see, when it comes to ethnic food, I need help. I grew up in a meat and potatoes family and married a meat and potatoes man.

My first choice was Sawatdee Thai restaurant, located on Route 3 just west of the city. My friend, Natalie, had spent time in Thailand and participated in the Surin Project, which allowed her to experience life and locally prepared food in a small village west of Bangkok while she helped care for the community’s elephants. Who better to teach me about Thai food?

We were greeted by owner Will Gilbert who grew up in central Vermont. As an adult he relocated to San Francisco where he met the woman who would change his life. Nee Sangchaya emigrated from Thailand and attended college in the U.S. The two met, married and after two children came along, decided back east would be a better place to raise them.

The year was 2008 and, as it turned out, jobs in Vermont were hard to find. It was then that Nee’s experience working in Thai restaurants in the Bay Area paid off. When their plan to open a restaurant in Burlington proved too expensive, Nee set out to find an alternative. Plattsburgh fit the bill.

Gilbert described Sawatdee’s cuisine as Thai, modified for the American palate, which means it is less spicy than the dishes Natalie experienced while traveling in Asia.

We both agreed Tom Kha soup, made with coconut milk, lime juice, mushrooms, scallions, cilantro, and choice of meat or vegetables (I chose chicken) was a must.

A recent addition to Sawatdee’s menu that has proven to be very popular is BoBa tea, a unique blend of tea, milk, sugar, chewy tapioca pearls, and fruit flavors that is both refreshing and satisfying.

For the novice diner, Sawatdee offers a daily lunch special which includes an appetizer, soup or salad and an entrée – a great way to experience the many menu options.

As Natalie and I ate and talked, Gilbert joined us. I asked how the pandemic had impacted Sawatdee. “We were a small business and did not have the option to close, so we needed to get creative,” he explained. “Take out is what saved us. At first, we didn’t know how it would go, but as time passed business just exploded. We saw a near tripling of our business.”

Will Gilbert is a charming man who knows how to create an atmosphere that brings people back again and again. I certainly will be back. His wife, Nee’s creativity and Sawatdee’s food, overseen by head chef, Thana Jenkarn, has earned a well-deserved reputation in Plattsburgh. A recent online post exclaimed, “Sawatdee’s Thai Food, YES!!!” I agree.