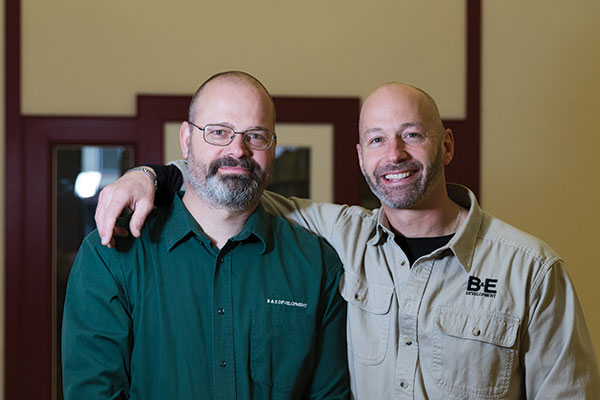 This old-time adage is of unknown origin, but there are still people and businesses that adhere to it, and B&E Development, LLC, would appear to be one of them. In operation since 2000, owners and brothers Bill and Eric Jost have been steadily growing their construction business by employing good old fashioned customer service methods, where the customer is king or queen, as it were, and attention to detail begins from the minute they pick up the phone and extends to the final cleanup at a job site.

The Sum of the Parts

The brothers grew up in the small farming community of Burke, NY, where they were no strangers to hard work. They took separate, divergent paths after high school. Bill attended Vermont Technical College where he received an Associate’s degree in Architecture and an Associate’s degree in Civil Engineering. He headed off to California to make his fortune, and within a year was hired to manage a company on the island of Guam. His business management skills were put into practice and fine tuned after he and a partner bought the company. After seeing a need for storage solutions for warehousing on an island so tiny it must import the majority of its goods, the partners started a second business, which grew to include kitchen cabinet sales and renovations.

Meanwhile, Eric studied at North Country Community College and SUNY Canton, only to decide that working in construction was his forte. While his brother honed his business acumen on Guam, Eric spent 10 years gaining valuable hands-on work experience, developing skills and gaining qualifications in all aspects of the construction industry, four of which included working on Guam alongside his brother. In 2000, Bill and Eric returned to upstate New York and bought their first investment property in Saranac. They teamed up, combining Bill’s business management skills and Eric’s considerable construction expertise to create B & E Development, LLC.

Rolling with the Changes

The early years of B & E Development might have looked like a blueprint for the HGTV series Property Brothers. During early to mid-2000 Eric and Bill were ahead of their time successfully flipping upwards of 40 houses: i.e. buying a property, making renovations or capital improvements that increase the value, and then selling it, subcontracting out some of the labor. They soon learned that the difference between flipping houses and contracting to do construction projects is a big one. In the former you are speculating on getting paid; in the latter, you will always get paid. The tightening housing market reinforced this distinction and the brothers broadened their focus to take on more residential and commercial construction and renovation projects. This proved to be the best move they could have made.

Since 2008, the brothers have increased their business tenfold. Having completed projects that range from bathroom renovations to building homes from the ground up, they have served over 400 customers in Clinton and parts of Essex County, reaching as far as Lake Placid, Saranac Lake, Keene, and Jay to Port Kent, Keeseville and Plattsburgh. Their customer list is as diverse as the projects they have completed, from private homes to Planet Fitness.

“Professional service sets us apart,” said Bill, who is the full-time administrator for the business. “To really get a project right, you have to be dialed in at a very high level,” he added. That process includes being totally clear up front about the customer’s tastes, and if that requires a walk through Lowe’s to physically see colors, styles and materials in person, so be it. “It is my job to take my conversations with the customer and put them onto paper to convey to the foremen what the customer wants as clearly as possible. It takes the burden off the customer and they can then watch the process unfold and enjoy it with a high level of trust.”

This communication, both before and during a project helps ensure that everyone is on the same page. It is not just for the customer’s benefit but also for the team working on the project.
Eric acts as a work force manager, and with anywhere from two to six projects underway simultaneously, that means a lot of coordination. “The right guys have to be in the right place, everybody working to their strength,” he explained. This may require rotating tradespeople from one project to another.

In addition, Eric coordinates materials, tools and equipment. It is his job to make sure employees on site have what they need, when and where they need it. “Our foremen start and stay on a job for continuity. They are personable and professional, ” said Jost. Since their foremen are the face of the company on the job and the liaison to the customer, they have come to trust that all the moving parts including labor, materials and tools are in place, allowing them to bring a project to a successful outcome.

But the brothers are not simply about getting to the other side of a project without incident. After reading the book Raving Fans: A Revolutionary Approach to Customer Service by Ken Blanchard and Sheldon Bowles, Bill’s goal was to bring to the business techniques to really learn what a customer wants and put systems in place to accomplish that goal. “The goal is to create “raving fans,” not just loyal customers. We want their experience with us to be so great, they can’t help but talk about it,” he explained. And they do. On Facebook and in testimonials on their website, customers sing B&E’s praises, highlighting everything from their honesty and integrity to their high level of craftsmanship.

“Finding business is not our biggest challenge,” explained Bill. This would seem to be an enviable position to be in, and they are fortunate to retain their highly skilled, widely diverse tradespeople through the North Country winter with continued work, even if it is just shoveling snow off a roof or other routine maintenance or cleaning. “I always say to them, ‘I didn’t always promise it would be fun, I just said you’d have work,’” he said. Like most construction businesses in our area, their employment needs to shrink and swell with the seasons, finding a motivated, qualified workforce as the season ramps up is a hurdle. “We want to hire someone who wants to be here,” explained Bill. He calls his core group of employees “viciously loyal.” “They are on time, breaks and lunch are scheduled, they clean up a site at the end of every day.” If a new hire isn’t pulling their weight, the staff lets them know. When conducting an interview, he wants potential employees to put themselves in the customer’s shoes, asking, “What would you want your experience to be?”

B&E has successfully developed employees who started out as laborers by allowing them to accompany one of the seasoned professionals on the staff to learn more specific skills. Those employees have grown because they wanted to learn and have the requisite team-player mentality. Unfortunately, the company has lost a few employees to union jobs in the region. “We want to take care of our employees, compensate them fairly and keep them working,” said Bill. Operating as a small business, however, they are limited by the market and it is difficult to compete with union wages and benefits.

Growing the business exponentially has proven to be the company’s biggest challenge. “It is hard to make the organizational leap to taking on more projects simultaneously,” said Bill. The level of organization required to coordinate all the moving parts for additional projects while maintaining their integrity is just not something they are comfortable compromising. Bill wants to keep gently pushing the envelope, while Eric is comfortable with their current position, but their core values are the same. “We believe in honesty, integrity and hard work,” said Eric. The brothers provide balance for each other in many other areas. “We are polar opposites,” said Jost. “We’re family so we have some colossal fights, but we always make up at the end of the day. We are just trying to do the right thing, it’s not hard. At the end of the day, it’s all construction.”