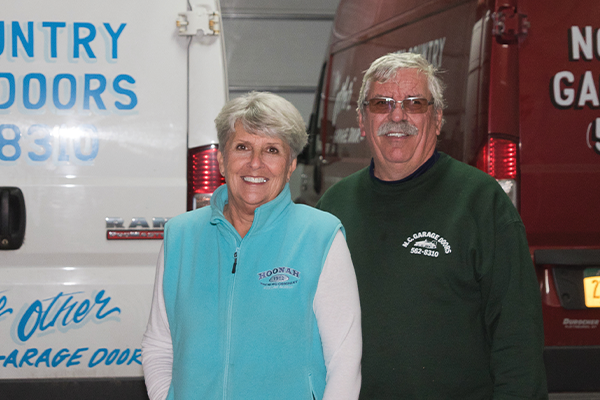 You don’t really notice them, but they’re everywhere.

Like many common items, if you have one, you give it no thought unless it malfunctions or wears out. While not the architectural focal point of any building, garage doors perform a necessary task. Some are stylish and modern looking, while others are just plain and functional.

Some are wooden, others metal, insulated or not, with or without windows. Although they’re familiar and mostly forgettable, one local family saw a potential business in them over 25 years ago.

The story of the LaBarrs began in a bowling alley in Champlain, New York. That’s where Joe met Colette. Joe, an Air Force brat originally from Keeseville in his early 20’s, was tending bar. Colette was born in Plattsburgh but raised just over the border in Lacolle, Quebec. She would occasionally go to the bowling alley, since, in her day, Lacolle was “dead.” One night a fire destroyed the bowling alley and Joe was out of a job. A fellow bartender who worked at Overhead Door in Plattsburgh by day suggested he apply for a job there. Joe was hired and worked for the company for nine years.

It was a good job with health coverage and a new work van every two years but Joe had three daughters at the time and was looking to the future. In 1991 he left Overhead and started his own business. Wisely, he left on good terms and was even told that if his new business didn’t work out, he would always have a job. In turn, Joe never bad-mouthed Overhead nor did he poach any of its customers. Colette quit her job at a local grocery store to take care of the office end of things, and her brother lent them start-up money.

Business was good from the beginning. Joe worked out of their house, and within two months hired his first employee. He had hoped to install two or three doors a week, as well as perform repairs, but…”We outgrew the house in five months,” he said. After renting a few warehouse spaces, he vowed: “We’re not moving again because there are lots of little parts.” Those included nuts, bolts, springs, cables, a myriad of fittings and more. Keeping those small parts turned out to be a smart decision.

In 1999, Joe noticed a suitable building for rent on the Military Turnpike. It had been a feed and grain store and fit the bill. In 2001, the owner offered to sell the building and 89 acres of farmland to the LaBarrs. Within four years they made two significant additions to the building, including loading docks, storage and a large workshop.

Until the past few years, the business was seasonal. Summers were the slowest but the LaBarrs kept their staff busy raising hay in the fields they owned. Business always picked up in the fall, mostly because construction projects were nearing completion. Garage doors are among the last items installed in a new building to keep them from getting damaged during construction. Another factor is that the arrival of cold weather triggers a reminder to those who procrastinated in getting their doors installed.

North Country Garage Door does almost no advertising. Word of mouth is how they attract customers. At first, the business was all residential until former Plattsburgh Mayor John Ianelli took a chance on them. After his term as mayor, Ianelli had a business auctioning off cars seized at the border and wanted doors for his building in Champlain. North Country installed five and that helped them break into commercial work. Although some contractors are required to use a brand name company, others like the Della Auto Group use North Country exclusively as does Bombardier and contractors like Murnane and Luck Brothers. At the moment, they have 50 installations lined up.

North Country Garage Doors offers their services all over Clinton and Essex Counties, and west to Malone and Tupper Lake. What’s the secret of their success? They treat their employees well. Their longest serving employee has been with them 20 years, and that man’s son just started working for them. They have a heated workshop where they pre-assemble as much of a project as possible, to minimize working in the cold. Customers inquiring about a new job get a quote the same day they call. Often repair work is also done that day. They keep a large inventory of obsolete parts, so that customers with older doors can still have repairs done. Joe has a phenomenal memory, and can easily recall customers and quickly address their inquiries.

While the business has done well, years of heavy physical work have taken a toll on Joe and he and Colette are starting to plan their retirement. Two years is the current timeline, “We want to bow out nicely,” said Joe. Although nice may be an overused word, it describes North Country Doors and its owners. They are nice to their employees, nice to their customers and nice to their competition.