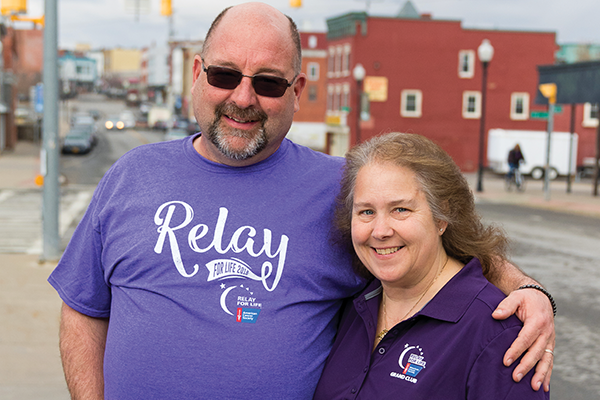 As spring commits to the North Country and we begin to come out of our seasonal slumber we anticipate several sunny celebrations. Mother’s Day and prom season give way to Dad’s and grad’s celebrations in the month of June. Enthusiasm runs high, but few North Country residents embrace this time of year more than the Stevens family.

Brenda Stevens has been the parts manager for G&G Auto Parts in Plattsburgh for 27 years. She started as a driver and is proud to have worked her way up in a field that doesn’t feature too many women. “People used to come in, walk right by me and wait at the counter for help. Now they ask for me by name,” she observed. “A lot of my customers are not just customers, they are friends.” Brenda is also a wife, a daughter, mother, and The Experience Tri Lead for the Plattsburgh Relay for Life. To all her roles she brings a boundless passion.

Brenda was born and raised in the North Country. She served 10 years in the Army National Guard as a medic straight out of high school. While driving for G&G Brenda met Paul on the ferry. Paul started working for Lake Champlain Transportation Company in 1985 as a deck hand. Now 33 years later he is an engineer with LCTC. Paul loves his job, “Being on the lake every day; I’ve got the best office in town. There are no walls and the view is beautiful!” The two have made their home in Plattsburgh where they have raised their two children, Kayla and Matthew.

Brenda comes from a long line of strong women: her mother Alice Roberts, her grandmothers Hilda Seymour and Eva Roberts, and her mother-in-law Priscilla Stevens. It was that strength she relied on in 2010. That summer Brenda’s mother passed away and then the couple received the earth-shattering news that daughter Kayla was diagnosed with Stage III Anaplastic Large Cell Lymphoma, a rare form of Non-Hodgkin Lymphoma. Brenda and Paul steeled themselves and began the work that family members and loved ones of cancer patients must undertake. They rallied in support of Kayla during her treatment, being there for each other so they could each be there for her. Brenda explained, “This disease affects everyone, not just the person who has received the diagnosis.”

Unfortunately, cancer was not done with the Stevens family. In March of last year Brenda’s husband, Paul, was diagnosed with a soft tissue sarcoma. To date she has been impacted by the disease as a mother, a wife and as a daughter.

When asked how she continues be strong, Brenda replied, “I’m not a quitter and I won’t stop fighting.” She attributes some of her strength to her relationship with the Plattsburgh Relay for Life. “We first participated when Kayla was diagnosed in 2011.” Since that time the efforts of event coordinators like the Stevens family have helped the relay grow. Last year nine hundred people participated in the relay held at the Clinton County Fairgrounds.

The resolve Brenda gathers from what she calls her Relay Family is beyond measure. “Helping to organize the relay here in Plattsburgh is a way for me and my family to give back for all the support we’ve been given during our difficult times. There are so many who helped us. Now we help.”

Relay for Life is the signature fundraiser for the American Cancer Society. It is put on almost entirely by local volunteers and can only really be understood by attending. This year Brenda will be the team lead and Paul will coordinate logistics. 2018 is a year for the Stevens family to celebrate. Paul is doing well and Kayla is six years cancer free. But that’s not all, Kayla will be getting married the weekend before the relay!

Here in the North Country we may have spectacular scenery, but that’s not what’s most remarkable about life here. It’s our incredible people and Strictly Business is proud to tell their stories.