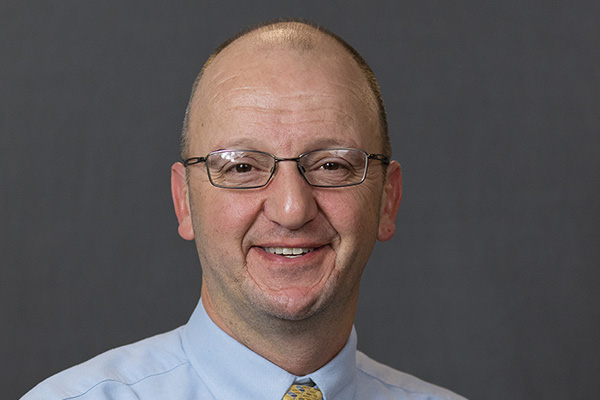 Curbside with Bill…
Hometown: Industry, PA
Family: Wife, Wendy; children Hannah and Connor; two dogs, Oliver and Bella
Education: Bachelor of Science in Environmental Studies from Edinboro University of Pennsylvania
Occupation: Market Area Manager, Casella Waste Management
Community Involvement: Chairman of the North Country Chamber of Commerce Board of Directors; Member of the Board of Plattsburgh College Foundation; Advisory Board member of The Strand Center for the Arts, the Salvation Army, and the Town of Peru Youth Commission.

Bill Meyers grew up in a blue-collar town in Pennsylvania and learned the values of hard work and discipline at a young age. His small and aptly-named hometown of Industry, PA offered good jobs in three back-breaking industries—coal mines, railroads, and steel mills. His father, grandfather, uncles, and many cousins all followed that path. Military service was another family tradition that helped shape Meyers’ upbringing, with family members serving in both the Army and Navy. “Early on, respect, hard work and ‘Yes, Sir’ or ‘No, Ma’am’ were a part of the core of who I was taught to be,” Meyers shared.

Meyers broke away from the mold to study environmental science in college, where he met his wife, Wendy. After a few years of moving around during his early career, the young family moved to Plattsburgh in 2003. Meyers joined the Casella Waste Management team as an Operations Manager and held that position until he was promoted to General Manager in 2009. His kind nature and positive leadership have meshed well with Casella which he described as a larger company that still feels like a family-owned business. Over the years, Meyers has been tapped to train new managers and leaders within the company many times and was recently promoted to the role of Market Area Manager. He is a quiet but passionate leader who loves his work and takes pride in helping his team succeed. He shared some of his inspiration and guiding principles with the readers of Strictly Business during a recent interview.

SB: What was the best piece of advice you ever received?
BM: This goes right back to my dad who coached sports throughout my childhood. I would often go to coaches’ meetings with him and hear people there debating and arguing, trying to get their point across. Instead of joining in, he was usually quiet during those meetings. After the meeting was over, he would go up to the lead person and talk to them individually to share his ideas. When I asked him why he did that, he had two reasons to share. First, he explained that it is very difficult to learn if you are the only one doing the talking. And second, who do you think the lead person remembers most, the person who went on and on and would not stop talking during the meeting, or the last one they talked to who was thoughtful in what they had to say? He taught me that you don’t always have to have the strongest voice to lead.

SB: Tell us about your approach to management and leadership.
BM: My management approach is bottom up. I believe that we work for those who we are responsible for, not the other way around. Leadership is serving others and leading by example. It involves being able to transition to all facets of what you are responsible for, from being effective in meeting rooms to being effective at the ground level —or curb, in my instance.

SB: What do you look for when you hire?
BM: Three qualities I focus on when I hire are humble, hungry and smart. Humble is a lack of excessive ego or concerns about status. Self-confident, not arrogant. Hungry is self-motivated, diligent and having a strong desire to do more by going above and beyond. And smart is more than academic intelligence. It’s emotional and interpersonal awareness and the ability to deal with others in the most effective way.

SB: What advice would you offer to someone starting his or her business career?
BM: The first piece of advice is to try everything. When you are in your 20’s just getting started, don’t allow anyone to tell you that you must do one certain thing. Seek out mentors, listen actively and then get out there, get your hands in it, make mistakes, learn, and have fun.

SB: Who is a local business personality you admire, and why?
BM: Garry Douglas and John Bernardi. They are both excellent communicators, dynamic in leadership, build great relationships and serve for a greater purpose or good. They are both confident yet humble, always seem to have a pulse on what is needed next and consistently deliver results.

SB: What are you most proud of professionally?
BM: As a group we achieved 1,000 days without a lost time injury on two separate occasions during my time here with Casella. Reaching a goal like this is rare in our business. Waste and recycling jobs are routinely listed in the top ten most dangerous jobs, so to achieve this was very special. We reached it once while I was the Operations Manager and once while I was the General Manager.

SB: What is something no one would guess about you?
BM: I started collecting baseball cards when I was young. Today I have over 25,000 different cards in my collection, and I still collect them to this day.

SB: What do you do in your free time?
BM: I spend time with my family and two dogs. I enjoy exercisingboth speed rope cardio and with light weights. I try to stay active in learning, so I do a fair amount of reading. I enjoy the outdoors—especially golf, hunting or just taking the dogs for a run.

SB: What does success look like to you?
BM: Success is being the best person you can be. It is helping others succeed first. Our time in our work life is only so long. Passing on what you know and helping others become successful is success.

SB: What do you believe the North Country community should do today to ensure a prosperous future?
BM: Invest in education—colleges, technical schools and school districts. It is important to help our youth and young adults to be equipped and ready to contribute after graduating. We also need to continue to invest in our waterfront and expand our airport and the opportunities that exist on the old Air Base.