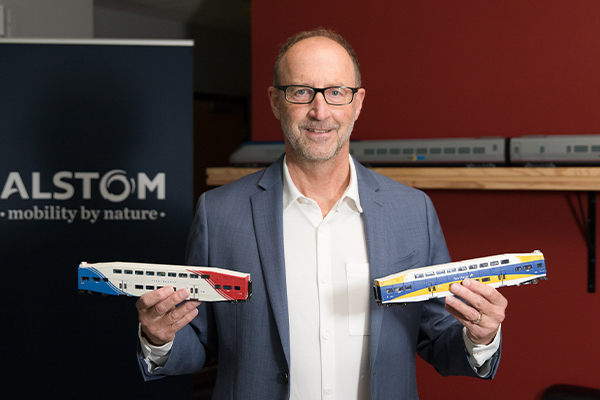 French names are nothing new to the City of Plattsburgh. Few other
cities in the nation have a French quarter, with names like Lafayette,
Montcalm and Champlain. The heavy Quebec influence in our region
goes back more than four hundred years, and people have eyed trade
routes connecting a great state and a great province ever since.

It came as no great surprise then when the Quebec transportation conglomerate Bombardier Transportation came to town in 1995 to build rail cars. Perhaps the city’s incredibly low electricity rates and reliable workforce were part of the decision making, but certainly our region’s transportation history played no small part.

Other manufacturers followed, from Nova Bus to Prevost, and numerous suppliers that served all these companies. People pondered, what’s next?

Alstom is that next chapter. A company that has been building rail cars around the world, Alstom built its reputation on innovative high technology signaling and switching equipment for the light and heavy rail industries. The expansion of its rail business through the purchase of Bombardier Transportation afforded it an opportunity to become the second-largest player in the mass surface transportation sector as it further extends its soup-to-nuts operation that has brought high technology rail to the U.S. and worldwide markets.

Scott Sherin, the Alstom Vice President for Business Development and Strategy in the U.S. is excited. He sees an opportunity in the expansion of the Alstom footprint to 70,000 employees at 250 sites in 70 countries worldwide and the long and historic foothold Bombardier has in the U.S. market, from the New York City subway system, to other rail and airport transit systems across the country. After the acquisition, there are now 150,000 Alstom vehicles in commercial service worldwide, with additional installations in signaling, services, systems, and rail industry components.

Sherin noted that 80% of all public transportation activity in the U.S. is in the Northeast Corridor, primarily in and around the New York metropolitan area. With the merger only eight months old, he sees nothing but opportunity. The company’s size has tripled in the Americas, and the labor force has increased almost four times.

Alstom is 20% owned by the pension fund for the Province of Quebec so its American headquarters is transitioning from New York City to the Montreal area. However, its center of gravity remains New York State. Its Plattsburgh and Hornell sites manufacture rolling stock, and both the Kanona and Hornell sites overhaul and refurbish vehicles and components. Rochester remains the signaling engineering and design hub, with about 400 employees there.

As an example, the growth in Austin, Texas mandated more efficient transportation. Rather than hiring dozens of contractors to design, build and then manufacture its system, a city like Austin could come to Alstom for one-stop-shopping. Within Alstom’s portfolio, all customer needs can be met and that offers potential for the manufacture of more rolling stock in Plattsburgh.

This partnership is good for Plattsburgh for many other reasons. The company spends about $1 billion per year with its suppliers in the U.S. and Canada, and Plattsburgh has an excellent supplier infrastructure that supports Bombardier and continues to produce for Nova Bus and Prevost.

Alstom is always looking for minority, women and veteran owned businesses as suppliers, and very much appreciates the help of our local NAmTrans consortium to assist in growth of its equipment and transportation technology investment here. Joel Wood of NAmTrans and the North Country Chamber of Commerce have been instrumental in working with Bombardier and Alstom to further our region’s terrific partnership with Quebec’s transportation industry.

Because both companies share similar approaches, similar traditional customers and the common sense of innovation, Sherin believes, “This is a story of continued growth. We are all proud of the manufacture of nearly 4,500 rail vehicles by Bombardier Transportation in Plattsburgh, and the new third-generation multi-level commuter cars for New Jersey Transit. This is now in addition to the 2,000 new rail cars Alstom has built in Hornell, the 5,000 more they have refurbished and the orders they have with Amtrak for next generation high-speed trainsets and for commuter cars for Chicago’s Metra. We have provided work for 335+ active suppliers in New York who collectively earned $177 million in 2020.

Heading local operations in Plattsburgh is Dave Black, the General Manager who first arrived in Plattsburgh in 2004 and has held numerous positions across the U.S. and Canada. He is rooted in the community through the North Country Chamber of Commerce and on the NAmTrans consortium.

He added, “We are grateful for the efforts of the tech schools, colleges and universities in the region that are advancing workforce development initiatives and helping meet the demand for skilled manufacturing workers.

Both Black and Sherin sees great opportunity. Sherin observed “There is no reason why New York can’t be a cluster for rail as we see in the Pacific Northwest for aviation.”

The acquisition has also allowed Alstom to double its engineering force and has brought greater knowledge and capabilities in battery powered and autonomous trains. The expanded manufacturing capability in new strategic markets will provide the opportunity for strong growth in the U.S. Alstom is already a leader in green technology for rail. Worldwide, light urban rail is converting to electricity, some of it green.

Alstom has invested in rail cars that can run hydrogen generated when solar installations are producing more than the system needs. Since fuel is the second largest cost in rail, the company is also exploring hybrid technology that allow cars to run on electricity when available, batteries in the outer areas of the city and perhaps diesel only beyond that.

Between its Coradia line of hydrogen fuel cell powered trains and its advanced signaling systems, Bombardier/Alstom is demonstrating that existing routes can be converted to carbon neutrality and all lines can benefit from state-of-the-art signaling technologies that maximize efficiency and conserve resources.

Alstom is also engaging in a Product Test Agreement to study the feasibility of converting some electric cars to battery power for the Long Island Railroad contract, as the perfect springboard for the newly expanded conglomerate.

These innovations are increasingly valued by New Yorkers and commuters across the country as modest or netzero carbon footprints have become a central element of proposed infrastructure spending.

By all indications, the acquisition of Bombardier Transportation by Alstom is a marriage made in heaven and that’s music to our ears.