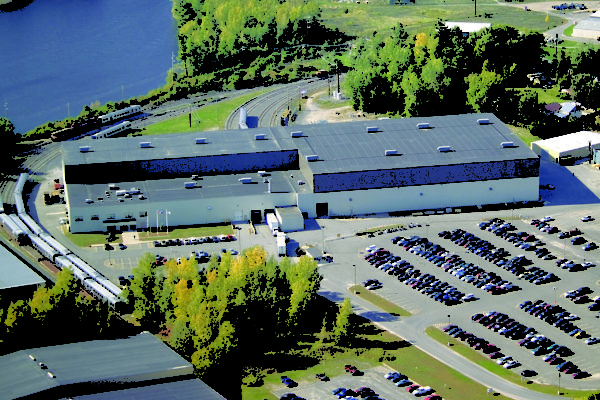 When Plattsburgh Air Force Base was unexpectedly chosen for closure in 1994, chaos, a sense of mourning and deep anger suffused the community. Outside forces were about to bring a cataclysmic change to the area. It was a dark time. But then a Canadian company got a contract to build railroad cars and they needed a factory. A twist of fate, quick thinking and visionary ideas turned Plattsburgh from a long-time military town into a center of transportation manufacturing.

Ever since the War of 1812 and the decisive American victory in Cumberland Bay, Plattsburgh had proudly hosted military installations. First was the U.S. Army, which built the elegant “Old Base” with its brick buildings and houses lining an oval lawn. In the summers of 1915 and 1916, military camps in Plattsburgh trained 40,000 college-educated men to prepare them to become Army officers. In the mid-1950’s, the U.S. Air Force built a base and stocked it with Cold War nuclear bombers. During an early 1990’s round of base closings, the Air Force assured the community that it was here to stay, and even announced plans to enlarge the Base and its mission.

But then the Air Force Base that seemed permanent was placed on a list of bases to be closed. It was 1993, and McGuire Air Force Base in New Jersey was selected to take over Plattsburgh’s mission. In 1995 the Air Force turned over the keys and left town. One thousand civilians who worked on the Base lost their jobs, businesses that catered to Air Force personnel closed and the population of the area fell. Plattsburgh’s core identity with the American military also disappeared, leaving the community reeling from economic and psychological devastation. But hope was on the horizon in the form of railcar manufacturer Bombardier.

Until 1948, Quebec did not plow its roads in the winter. In the Eastern Townships of the province, a young child died because his parents couldn’t get him to the hospital. The child’s father, Armand Bombardier, was inspired to build a snow going machine. Mechanically inclined and highly creative, he designed and built a boxy carlike vehicle driven by a gasoline engine. It rode on tracks like a bulldozer and was steered by a pair of skis. It was an instant success and led to contracts with the Canadian military.

The initial vehicle spawned other tracked machines, and in the 1950’s Bombardier invented the first continuous, durable track which drove his new product, the snow mobile. He wanted to call it a “Ski-dog” but a worker mistakenly painted the word “Ski-doo” on the prototype and the name stuck. Popular with recreational users, sales soared and the company branched into jet skis and motorcycles. The fuel crisis of the early 1970’s cut into sales and the company diversified into rail transport. Its first order was for subway cars for the Montreal Metro.

Bombardier’s first manufacturing plant in the U.S. opened in 1981, in Barre, Vermont. During the 1980’s and 1990’s, Bombardier grew rapidly, buying up other companies that built rail cars, locomotives and aircraft, while continuing to make recreational and all terrain machines. With businesses scattered across Europe and North America, it became a world leader in transportation manufacturing.

During the time when Plattsburgh was coming to grips with the Base closure, Bombardier secured a contract to construct 38 rail cars for New York City’s MTA, for use on the Metro North line that serviced the city’s northern suburbs. Bombardier’s Barre plant was busy building subway cars, and the company needed a new assembly plant to fulfill the Metro North contract. It wanted a site in the U.S. near its Montreal headquarters, and it made sense to pick a place in New York State.

New York Governor Mario Cuomo asked Ray Gillen, director of what was then known as the Department of Economic Development (now Empire State Development Corp.) to help Bombardier find a home in Plattsburgh. Bombardier’s representatives, Gillen, and Garry Douglas (President of the North Country Chamber of Commerce) found a warehouse building on the Base that met its needs. However, the Air Force was still in residence and it was not possible to come to an agreement on the building. It was just too early in the transition from military to civilian use to try such a complex transaction.

Disheartened, Gillen and Douglas went to see Mayor Clyde Rabideau the very afternoon the talks broke down. “I remember vividly going to the mayor’s office… he was phenomenal,” said Gillen. Rabideau, who was mayor of Plattsburgh from 1990 to 1999, told them he had a site available just off the Base, near the north end of the runway.

In fact, the mayor did not have a site in hand, only a hand shake agreement with the property owner. Rabideau explained, “I took a big gulp and then got to work.” The next day Bombardier’s vice president was due in town to inspect the site which was blocked from direct road access by a rough piece of ground. Rabideau called his public works department, and that evening a crew mapped out and built a roadway of sand and gravel. It was a cold November night, and in the morning the new road had hardened nicely. The Bombardier vice president arrived, stepped out of his car, turned up the collar on his jacket against the wind, and said, “Tres bon,” (Very good) and then went back to Montreal. That’s what it took to establish Bombardier in the North Country.

The Plattsburgh plant has produced standard passenger cars, locomotives, hybrids, light rail cars, and subway cars. Hybrids have both diesel and electric motors for use in New York City, where trains use diesel power outside the city, and then switch to electric when traversing underground tunnels to Grand Central Station.

Today the plant builds and repairs cars for many areas, including San Francisco’s Bay Area Rapid Transit system. You can occasionally see a truck hauling a rail car with the letters “BA” on the side. Rather than send the BART cars across the country by rail, they are trucked individually to prevent vandalism to them in rail yards in route.

Although Bombardier is changing hands, the new owner, Alstom, plans to continue to build rail cars in Plattsburgh. A large French transportation company with worldwide operations, Alstom is best known for constructing France’s high-speed trains and the trains that cross under the English Channel to the U. K.

Bombardier was the first of many transportation-oriented companies to settle in Plattsburgh. When community leaders recognized the value of transportation manufacturing, the area’s economic developers pivoted to focus on it. Successful efforts included bringing in other companies such as Volvo-owned Nova and Prevost busses and Norsk Titanium, an aerospace supplier.

Less well known are suppliers and vendors who furnish parts and assemblies to the larger companies. One is WABTEC’s Vapor Stone Rail Systems on Arizona Avenue on the former Plattsburgh Air Force Base. There are more than 50 such businesses in the area, employing some 9,000 people. Plattsburgh’s location, astride rails and roads connecting Quebec with the U.S., its proximity to Montreal and its superb work force have produced economic prosperity for the North Country. As Garry Douglas says, “Where things move, prosperity follows.”