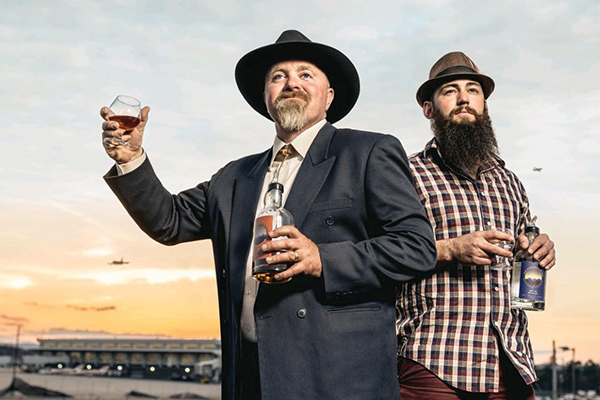 Tucked into the industrial section on the former Plattsburgh Air Force Base there is a bubbling business. Mountain Spirit Distillery (MSD) has found a home in the old Explosive Ordnance Disposal Building. Founding owners Dan Paquin and John Whiteman met while working at J. Hogan Refrigeration & Mechanical in Peru, New York and realized they had common hobbies. They’d made beer and they’d made wine and they were interested in craft distillation. The friends tinkered a little and made a product that most of their friends enjoyed. Being hospitable country gentlemen, they decided to share their spirits with the North Country. And so, in February 2016 Mountain Spirit Distillery, the only locally owned and operated craft distillery in Clinton County, opened.

Paquin and Whiteman have an organic chemistry that works for their product and their business. Currently they have perfected four different spirits using their skills in the production of artisanal spirits using a fractional reflux distillation unit. Cheers to science!

THEIR WHEY
Operating as a licensed New York State Farm Distillery MSD is required to use 75 percent New York ingredients. That mandate might have been a stumbling block for some but not these two. They collaborated with a local dairy farm and are making vodka with whey. Yes, the by product from making cheese. Normally the sugar necessary for proper distilling would come from starches such as potatoes or even corn. The whey is exposed to an enzymatic process that converts the lactose into a sugar. This insures that no residual whey will be left in the final product which would make it cloudy.

“Can’t get anything purer than the driven snow!” said Whiteman, and “Driven Snow” is the name they gave their inaugural vodka. MSD found its sweet spot is 190 proof when the product leaves the still. “You wouldn’t want it any lower and it really wouldn’t be palatable any higher,” observed Paquin. The rough equation of proof to percentage of alcohol is about half, which means the vodka is about 80 percent. It’s good that historically they handled explosives at the same address because the flammability of this spirit is higher than gasoline. MSD’s most recent product is a vodka infusion aptly named “Morning Wood” a name they came to by what is infused with it before it is bottled.

MSD partners with Adirondack Coffee Roasters and they soak the Adirondack java in their whey vodka along with a healthy amount of oak. It tastes like coffee liquor with a smooth round finish that would make a delicious ice-cold chocolate martini.

HISTORY & THE FUTURE OF WHISKEY
Both Mountain Spirit Distillery whiskies have the same mash bill which is a distiller’s term for the ingredient list. They continue to adhere to NYS laws and source their corn from Franklin County and malted barley from North Country Malt Supply in Champlain. Both whiskies are distilled at least twice. Once the spirit goes through the second distillation it is filtered and proofed with a specially calibrated proofing hydrometer that reads accurately to a thousandth of a percent. Once it meets the expectation of the masters it is bottled as “Adirondack Glow”, a white whiskey. It has all the grain and sweetness of a whiskey but none of the color. That is unless they are making what they call their “Workin’ Man’s Whiskey” which looks and smells like bourbon. It even tastes like some of the better bourbons I’ve sampled but it can’t be called bourbon. Federal law established in 1897 called the Bottled in Bond Act prohibits it. Additionally, the whiskey would need to be aged in virgin charred oak barrels for a period of years — minimally four, ideally twelve — with some of the more exclusive products boasting decades of barrel aging. But these partners use science to offer a similar taste without the wait. “We use charred oak chips and age in a stainless-steel cask,” explained Whiteman. Using the chips allows more of the liquid to penetrate a larger surface area of the wood which cuts the time it needs to spend in the cask dramatically without negatively affecting the flavor.

SPIRIT OF THE NORTH COUNTRY
When you talk to Paquin and Whitemore what is surprising is their humility. “We are a producer of a blue-collar product. We keep in mind where we came from when we set our pricing,” shared Paquin. It’s important for MSD to share their idea that quality craft spirits don’t have to be expensive. As a self-described working-class distillery, they are proud to be producing something different and keeping it affordable. “This isn’t a hobby for us. It’s our business,” Whiteman emphasized. “We don’t have any loans, we don’t have any investors. it’s just John (Whiteman) and me. “

“It’s all our blood, sweat and tears,” finished Whiteman “Yep, and lots of ’em!” exclaimed Paquin with an impish smile that says we might have only begun to hear their story.
Mountain Spirit Distillery will have another spirit ready for gifting for the holidays and the pipeline is full. They are looking at infusing maple into their whiskey and perhaps creating a gin. You can find MSD varieties on the shelf at Gioiosa’s Wine and Spirits in the Skyway Plaza in Plattsburgh’s south end and behind the bar at a variety of Plattsburgh watering holes. Paquin and Whiteman have brought Plattsburgh its first craft distillery since prohibition. They’ve done it with ingenuity, hard work and overwhelming modesty, truly embodying the spirit of the North Country.