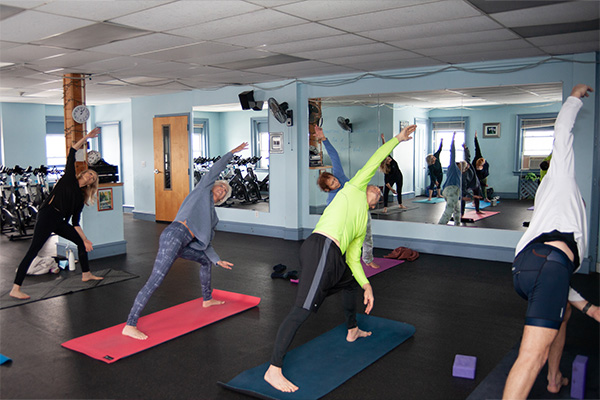 Over the past 134 years, the Plattsburgh YMCA has been a staple in the North Country community. Part of its success is a reflection of the name recognition of the Y brand, but also the variety of services it offers. From gyms, fitness classes, pool, child care services, after school programs, summer camps, and youth sports, the Plattsburgh YMCA has something for everyone. After beating the odds and successfully opening a new facility in the middle of the pandemic, the Y continues to look for ways to expand to meet community needs and looks forward to what the next 100 years will bring to the organization.

“Our Y is really about bringing people together,” said CEO Justin Ihne. “It’s not just about selling memberships. You might see a five-year-old taking a swim lesson, see an older adult learning about balance and taking a group fitness class, or a college student lifting weights. It’s about different age groups, different people, different backgrounds all coming together.”

The Plattsburgh YMCA opened in 1887 on the top floor of the D&H railroad terminal on Bridge Street in downtown Plattsburgh. After years of switching locations, it was finally able to build its own facility in 1908 on Oak Street thanks to a generous $135,000 donation. About 15 years ago the Y opened a location in Malone and started programs in Saranac Lake to expand its footprint in Franklin County. In July of 2021, it opened a new location in the former City of Plattsburgh Recreation Center on the Oval of the former Plattsburgh Air Force Base.

Ihne admitted it was risky to open a new gym in the middle of the summer — one of the slowest times for gym usage — and during the pandemic, but the partnership with the city was already in the works when the first cases of COVID-19 were reported. Once the state ordered shutdowns, the plans came to a halt, but were revived as case number dropped last spring. Now in business on the Oval for more than eight months Ihne is pleased with the community’s response to the indoor track, open gym and the very popular pickleball courts that have been filled with enthusiastic players since the grand opening.

Despite the constraints of the pandemic, the Y was able to continue to provide services. While the facilities had to close for a time, members were able to use online fitness platforms. The Y has seen an upward trend in membership for the past five years, and especially during the past two years when members proved their loyalty at the height of the pandemic with 60 percent continuing to pay their dues.

The Y has approximately 5,000 members, but its overall reach is much greater. Between the after-school and child care programs, summer camps and youth sports, it serves between 8,000 to 9,000 residents in the North Country. That includes the eight after-school programs it manages in five school districts that enroll 500-600 kids during the school year. During the summer, the Y also has six summer camps that host 600-700 campers.

During the height of the pandemic, the community relied on the Y for essential child care services which it continued to offer while other providers closed their doors. “Child care is a huge part of the need in our community,” said Ihne. “The North Country is a child care desert which has only exacerbated the staffing crisis many of our industries are experiencing.” Now that most people are back to work, Ihne noted that the Y is continuing to fill some of that void and is working with businesses to provide more services as we all move forward.

YMCAs have the reputation of improving the quality of life in an area and it is important to recognize its role in economic development. “When people are moving to a new area and researching things like local hospitals, schools and amenities, the YMCA pops up on that list,” said Ihne. The Y brand is well known nationally and people connect the brand to quality services, child care, health and wellness, and also to community.

“It doesn’t have to be a class. It could be a gathering or an event, or a birthday party, the Y is a conduit for community,” Ihne emphasized. “It’s important to have a strong YMCA in the community to add to those benefits that attract people to the area.”

The Plattsburgh YMCA is also known as a key place to start when thinking about health and wellness, Ihne noted that wellness comes in different shapes and sizes. There are people who are really motivated and come to the YMCA three to four days a week and know exactly what they want and the exact equipment they need. On the other end of the spectrum are people who want to be healthy, but need the motivation or guidance to start their journey. The Y is able to step in and be a partner with those folks who want to make changes and work towards a healthier lifestyle. Between group exercise classes, personal trainers, the exercise equipment and facilities, they are able to serve all kinds of people who are interested in health and wellness.

The Plattsburgh YMCA is connecting with people now more than ever and has its highest membership in a decade. The success has led its Board of Directors to take a serious look at expanding. They are currently doing their due diligence, trying to find a new home and are making progress. The North Country needs more health and wellness facilities, especially after the University of Vermont Health Network Champlain Valley Physicians Hospital Wellness Center permanently closed in 2020, making the Y the only place in town with a pool. In the meantime, we will wait patiently for Ihne to release details about the Y’s long-term plans that are expected to be unveiled in the coming months.