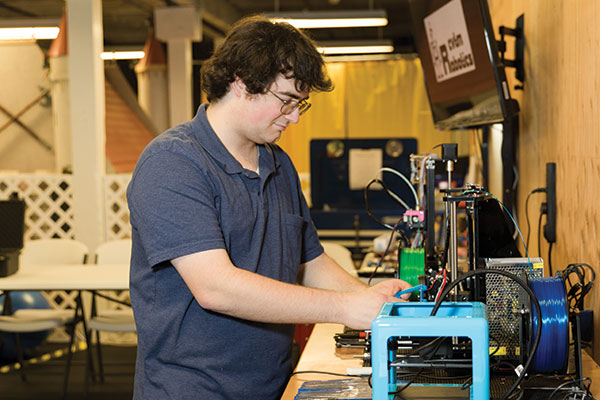 The Champlain Valley Transportation Museum (CVTM) hosts a yearly, student-run program that focuses on robotics, microprocessor development, team building, and leadership. Right here in Plattsburgh there are teams of kids building robots to compete on the state, national and international level and they’re doing it quite successfully.

Justin Collins, a former high school Science Olympiad participant, was approached by Dr. Anthony Vaccaro of the Transportation Museum to gauge interest in developing a robotics program for students of various ages. Justin jumped at the chance and thus began the FIRST Lego League at CVTM.

The league is a robotics program geared towards students between the ages of 9 and 14. It’s a yearly student competition where teams are assigned a challenge at the beginning of the year and are given a few guidelines to complete the challenge. At the end of the year, they compete, and teams come together at a regional competition where they’re awarded points on several factors, including how well they solved their assigned challenge.

Five years into this program and it shows little sign of slowing down. In fact, it has started to gain the attention of several community groups, local employers, the local college and university, and prominent community members. Coordinator Darleen Collins, her husband David Collins, and a list of volunteers are currently coordinating the program.

Collins, a Plattsburgh resident, said she saw the value in the program right away. “After the first year of FIRST Lego League, we expanded the program in both age directions to include FIRST Lego League Junior, and FIRST Tech Challenge. All are given different levels of challenges and all require different skills. But the most important thing is that the older students mentor the younger ones, and that’s built into the core of the program.”

FIRST is an acronym that stands for “For Inspiration and Recognition of Science and Technology” and was founded in 1989 by Segway inventor Dean Kamen “to inspire young people’s interest and participation in science and technology.”

There are two key components to the FIRST programs: Coopertition and Gracious Professionalism. Both core values are the passion and drive behind these project-based learning programs.

Gracious Professionalism is the cornerstone of the FIRST program. It supports and encourages high-quality work, highlights the importance of valuing others and creates and builds respect for individuals and the community. Competition and collective should not be considered mutually exclusive. Students adhering to this core value learn both to compete as well as treat their team members and opposing teams with dignity, respect and, at times, show support by pitching in and helping everyone succeed.

From the FIRST website: “In the long run, Gracious Professionalism is part of pursuing a meaningful life. One can add to society and enjoy the satisfaction of knowing one has acted with integrity and sensitivity.”

Coopertition, a term invented by FIRST program organizers, is the notion that teams can show kindness and respect to each other in the midst of competing to win. In fact, the notion of Coopertition also lends itself to the inner workings and support shown between team members and the mentorship that the older program participants show towards the younger teams.

The FIRST programs are split into four main levels of participation, each comprised of team members within a specific age range. Each level is presented its own challenges that team members must solve heading into their respective regional competitions.

FIRST Lego League highlights learning skills and teamwork for students aged 9 to 14 and is the program that starts to truly highlight the complex problem solving, team building, abstract thinking, and robotics programing that lies at the core of the FIRST programs. This is the kick-off program adopted by the Transportation Museum five years ago. Teams are required to research real-world problems and come up with solutions. At this level they must also design, build and program a robot that will compete against other teams.

Moving from conceptual to practical, the FIRST Tech Challenge (FTC) level focuses on teams aged 14 to 18 and requires team members to mentor and guide the younger teams, build a business plan for their project, create robots from scratch, and also fabricate their own robot parts using 3D printing and CNC technologies.

Finally, the FIRST Robotics Competition, also known as “the hardest fun you’ll ever have,” pits teams together in a six-week challenge that requires high school aged teams to raise their own funds, design a brand and build industrial-sized robots that compete against other teams.

In December 2016, the Robotics Program’s FTC team, the FTC 8527 Bond Bots, successfully competed at the Red Hook Qualifier and advanced to compete at the Hudson Valley Championship on February 5. This was the first time the Robotics program sent a team to the event. They described the competition as “fierce.” Congratulations to the local team which won two of their five matches.

The Bond Bots also went on to win the First-Place PTC Design Award at the Vermont Championship on February 11 for their efforts in overall robot design, 3D design and printing of robot parts, and their CAD rendering of their robot. After qualifying matches, they placed 11th overall out of 32 teams.

Earlier this month, the Robotics Program hosted a new event called the “Adirondack Coast 3D Print Sprint.” On April 1 and 2, preregistered teams made up of three to five members were given 24 hours to design and 3D Print a solution to a surprise challenge. The 3D Print Sprint took place at the Champlain Valley Transportation Museum, where “the reveal” of the 3D Print solutions was open to the public viewing on April 2. Local industry professionals were on hand to support the judging and to mentor the student teams.

With the popularity of the program and the limit of the budget, space and volunteers, the program cannot accommodate more than 40 students. However, every year they try to make the program better. Kids are fabricating more of their parts, younger kids are developing their skills and more business contacts are being pulled in to let the students know what types of jobs are available to them using the types of technologies they are using to compete in these fun challenges.

“Fundraising is exhausting,” Collins explained. “The museum helps because we use 1800 square feet of space. Up until last year we didn’t have our own space,” she added. This program is funded through several sources, including the Clinton County Legislature, Best Buy and other local community members who pitch in.

All of this talk of robotics, programming, teamwork, and Gracious Professionalism leads to the question, “How does this all fit together?” Workforce development is a concern for any high-tech manufacturer/ employer and locally we’re facing a workforce resource shortage of people who will work in the new age of manufacturing.

Given that teams are required to use 3D printing technologies to design, manufacture and implement their robotic solutions, and at the same time teach and mentor other teams on how to use the technology, we may start to see some of these students enroll in Clinton Community College’s Institute for Advanced Manufacturing, or even enter the workforce directly from this program. Some of these technical skills can be learned only from hands-on, project-based learning opportunities.

With the recent announcement of Norsk Titanium, a 3D printing and aerospace manufacturing facility, along with the robotics program’s success in developing relationships with local companies and institutions, it shouldn’t be any surprise if the FIRST programs become feeder programs for area workforce demands.

The program’s yearly budget is just $15K. The current momentum of area businesses increasing their investment of time and money in this type of student engagement may prove to be an investment in their future workforce. The skills being developed in the FIRST programs lie at the heart of the next phase of high-tech manufacturing growth in the North Country.