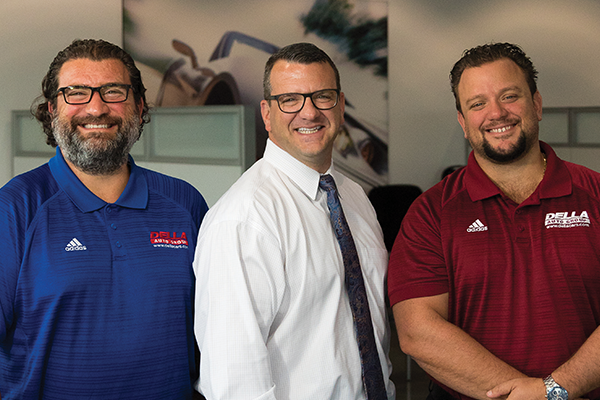 The definition of the word “dynasty” is “a succession of people from the same family who play a prominent role in business, politics or another field.” It was used to describe the Ford Motor Company, founded in 1903 by Henry Ford and a handful of investors, and reincorporated soon after to include Ford’s wife and son. Over the years, Ford diversified its holdings, purchasing Jaguar, Aston Martin, Volvo, and a significant share of Mazda, offering a family of brands under the Ford umbrella. Today, the term “dynasty” could easily be applied to the DELLA Auto Group and its wealth of dealerships in the Champlain Valley and Glens Falls region. The Early Years “Our father and mother grew up in Brooklyn,” said Christopher Della Bella, Vice President and CFO of the Della Auto Group. “Our grandfather owned a Flying A gas station. Our father, Michael Della Bella, worked at the gas station and learned to be a mechanic.” Later our grandfather took a job working as a mechanic in a Pontiac dealership owned by General Motors located on the West Side Highway in Manhattan. It was there he was offered an opportunity to become a Service Advisor. Della Bella accepted the position and transitioned to his new role which included working with the service customers directly versus working on the vehicles themselves. Soon thereafter he was offered another opportunity to become a District Service Manager and began making direct contacts with GM dealers. “He covered a market that exposed him to this very area,” explained Christopher. “One of the dealers he worked with was Santa Pontiac which was located on Broad Street in Plattsburgh.” He continued to work with GM until 1983, when he had the opportunity to buy his first dealership. Bob Clarke Pontiac in Glens Falls, renaming it DELLA Pontiac-Buick-Isuzu. That was the start of the DELLA Auto Group.

During the 1980s DELLA Auto Group tripled its holdings, opening Michael Pontiac GMC in Valley Falls, NY and Christopher Chevrolet-Buick- Pontiac in Ticonderoga, NY. In 1996, Michael Della Bella came to Plattsburgh, opening DELLA Honda. DELLA Suzuki of Plattsburgh followed in 2005. The following year, the DELLA Auto Group opened a new location for DELLA Suzuki and opened DELLA Motorsports, a Polaris dealership. In 2013, when Suzuki Motors announced it would discontinue building cars for the U.S. market, the dealership transitioned to a Mitsubishi dealership.

While Plattsburgh was becoming a major hub for DELLA Auto Group, its footprint in the Glens Falls region was expanding as well. In 1999, they opened DELLA Honda of Glens Falls. A decade later they opened a state of the art body repair shop in Queensbury. “Sadly, none of us are as mechanically inclined as our father,” Christopher explained. “We are more of the ‘give me some duct tape and I can fix it’ type.” In another strategic move, the group acquired property formerly occupied by Saturn on Quaker Road in Glens Falls in 2009 for a used car facility known as Autotrends. In 2016 a Mazda franchise was added to the Autotrends location.

Meanwhile, back in Plattsburgh, he continued to work with General Motors for a while and then with a dealership group based in Greenwich, CT until 1983, when he had the opportunity to buy his very first store in Glens Falls, New York, Bob Clarke Pontiac, later renamed DELLA Pontiac-Buick-Isuzu. DELLA Auto Group welcomed DELLA Toyota to its family of dealerships, later purchasing a KIA dealership in 2017 and in 2018 the Group purchased Bill McBride Chevrolet and Bill McBride Subaru, renaming them DELLA Chevrolet and DELLA Subaru of Plattsburgh.

“We all grew up in the business and learned and trained in all the various dealership departments,” said Michael, Jr. “It’s like having four different businesses in one: sales, service, parts and body shop.”

In addition to knowing the ins and outs of every brand they offer, the siblings manage the operations of twelve facilities and employ over three hundred people. “Many of the current employees can remember when we were all still in school and our father ran the dealerships and created the DELLA Auto Group we know it today,” said Michael, Jr. “Dad is still very involved. We handle day to day operations as he continues to focus on additional opportunities and the overall health and well-being of his “fifth” child, the DELLA Auto Group. It is our hope and desire to one day pass the businesses down to the third generation.”

Challenges abound when you are working on managing dealerships across brands and across a region, but the Della Bellas see only the positive side of their foray into the North Country auto market. “The local market has been wonderful to us all,” said Anthony. “The community has been so accepting and welcomed us with our first local dealership in DELLA Honda.” He attributes the overall success of the DELLA Auto Group to the Champlain Valley and surrounding areas. “The success we have enjoyed has helped us to grow and purchase other dealerships. The most commitment you can show to an area is to continue to purchase more dealerships.”

The Della Bella family gives back by making community involvement in each of the markets a priority. “Our support can be seen in our partnerships with local nonprofits and charities, including education, health, the arts, youth sports, and many others,” said Kiara. “We are proud to help enrich our community and the people in it.” In addition to being a sponsor of the Mayors Cup Festival and Regatta 2018, DELLA has or will sponsor the Irish Festival, the 4th of July Celebration, the Battle of Plattsburgh Commemoration, and the Downtown Holiday Parade and Tree Lighting this year. “We always try to be involved and do our part to be good corporate citizens,” added Kiara.  “Striving to give more than you take is something that our parents have instilled in us since day one.”

It’s All About the People

“Our employees are the reason we have enjoyed this growth,” said Christopher. “In this day and age sometimes things go wrong. The important thing is to trust your employees to do the right thing.” Repeat and referral sales and interactions have him thinking they are definitely on the right track. “We are thrilled to have an opportunity to employ so many wonderful people in this area.

One key employee would be Platform Manager for DELLA Plattsburgh, Ernie Galarzaa, 40 year veteran of the retail auto business, who joined the DELLA Auto Group in January of 2017. “Joining the DELLA Auto Group was an easy decision. Their reputation for exemplary customer treatment is only exceeded by their treatment of staff. I can honestly state that though my last name is not Della Bella, I am treated as if I were a family member,” he said. “Sometimes we get lucky in life. That is how I feel lucky!”

Amid speculation about how tariff talks will affect the automotive industry, the Della Bella family remains optimistic. “It is very early on to predict how the global tariffs could impact our vehicle sales,” said Christopher. “The chess match that is occurring now is to try and allow our vehicles to be exported into other countries without having to pay large sums of money which makes our domestically produced autos more expensive.  As we have just seen, Germany and the U.S. have agreed to a level playing field not only for automobiles.  That reflects well for us and them.”

With so many brands to choose from, is there one that stands out as the family’s favorite I asked. “Brands eventually become like children to you,” explained Christopher. “They are all special as you remember what they helped you achieve as an organization. That said, the sentimental favorite would have to be Pontiac. The origin of all our success was our father’s ability to get a job working in a Pontiac store. The very first brand we acquired was Pontiac.”

“The ability to represent so many brands in so many different markets gives you a tremendous amount of pride,” added Christopher. “We are the face of these manufacturers in our local communities. To now have two generations involved only helps strengthen that bond between the brand and us personally. It’s all very exciting to think about what lies ahead for us individually and for the DELLA Auto Group.”